It’s going to be hard to top Port Mac, as I’ve come to affectionately call Port Macquarie in just two days time. This small to mid-sized little working class town in New South Wales was just small enough to be interesting and just big enough to be convenient. No Starbucks on Main Street that we saw (that’s a good thing), but plenty of cute cafes and espresso shops for my flat whites. And not too many tourists.

Sunrise 20 steps from our camp site

And the beaches! You couldn’t throw a stone at a crocodile without hitting a beach! I’m still working on my Aussie-isms. 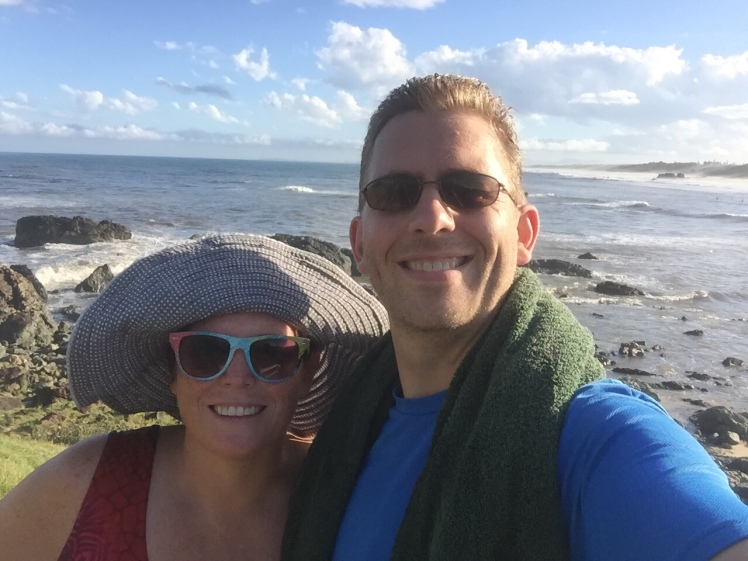 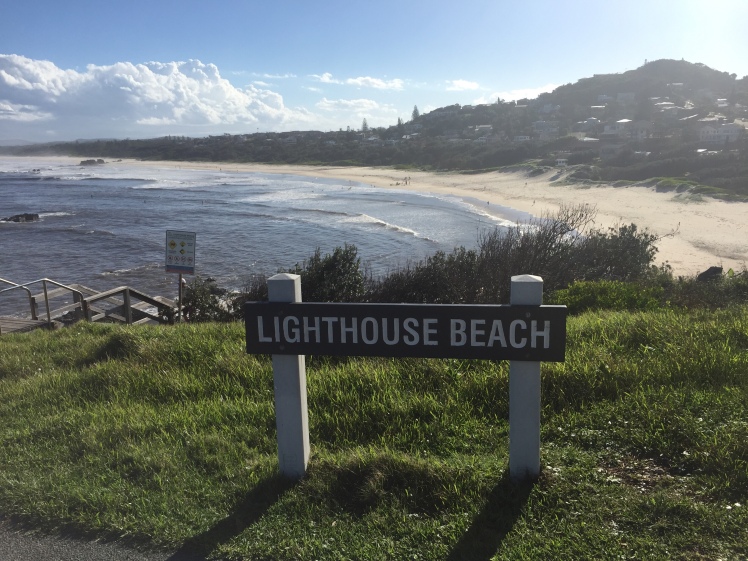 Most of the beaches were connected by a well-maintained coastal walkway that passed right by our camp site.

Not to mention the most amazing and fresh seafood! Snapper. Squid. Shrimp. Oysters. I hope all the food in these other little coastal towns can live up to my beloved Port Mac. 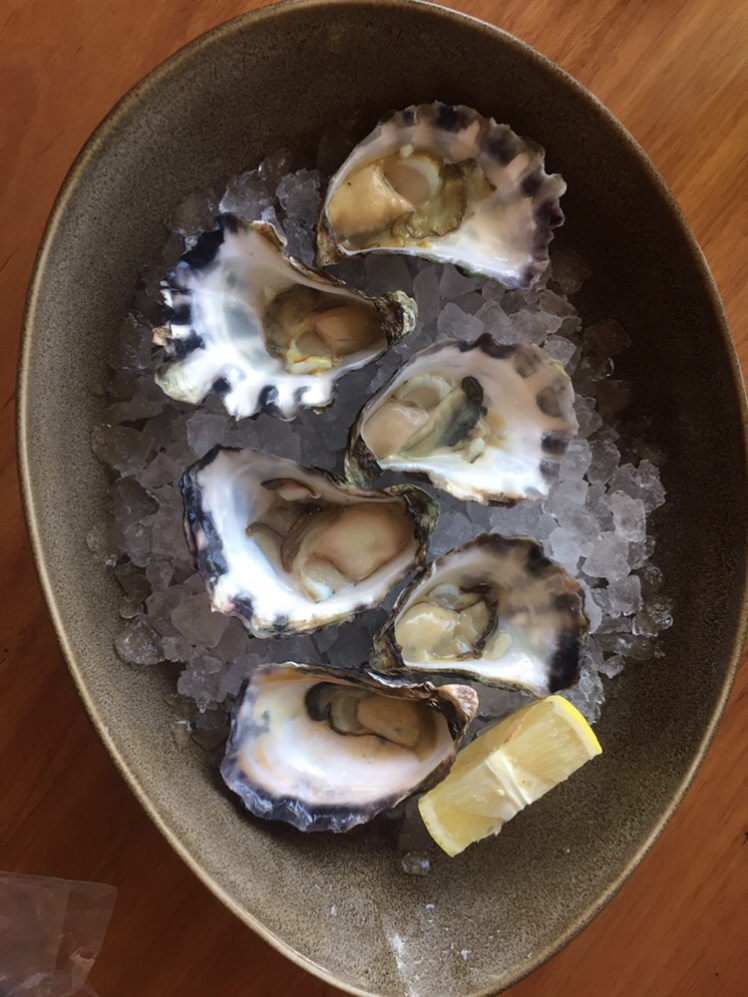 But mostly the people have just been so kind and welcoming to we strangers. They adore their little town, and they welcomed us to do the same. It’s easy to fall for a place that is so well-loved by its people. They even encouraged us to decorate one of the rocks along the sea wall like thousands of other people have over the years. We didn’t, but we enjoyed taking in the sometimes really good and sometimes really questionable art that others have contributed. 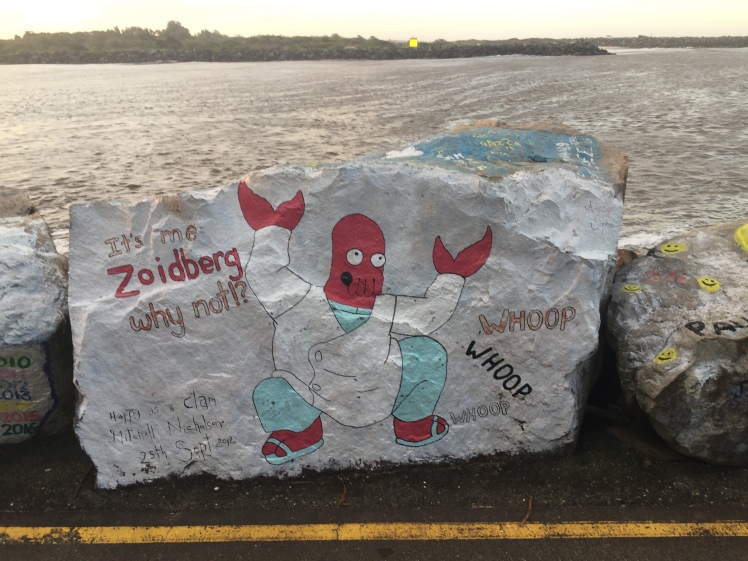 But we had to move on. Three days in to our 2000 mile 14 day road trip, and we had covered about 250 miles. We still had a long way to go and lots of cool stuff to see. Interesting thing along this Pacific Highway route…very few signs with distance indicators, no markers for each km, and no exit numbers. So as we go, sometimes we have no idea how far we have driven. And that’s ok.

The drive from Port Macquarie to Byron Bay was peaceful and pastoral and plain gorgeous. This isn’t the Australia of Uluru rock and the dry arid bush. There were flood plains and rivers everywhere along the way. Lush and green. Groves of tall eucalyptus trees, which I’m sure were hiding the koala bears, interspersed with pastures full of fat lazy cows. Frankly, it’s not at all what I expected, and that makes me appreciate it even more.

We chose not to take the scenic byways but to stick to the highway and it was still inspiring driving, even with a bit of roadwork. We even saw our first, but hopefully not our last, kangaroo! She was just hanging out munching grass in the median, like a deer might do back home. I wasn’t quick enough to snap a pic.

Temperatures are cool, in the 70s today. Sometimes they top 80, but it’s cloudy with the look of rain so I doubt that we will break a sweat or see much sun on this drive. That’s fine because the Aussie sun is no joke, and I already have enough freckles to fill an Aussie schooner. Twice.

As we head north, it gets warmer and more tropical. That’s a mind warp coming from the northern hemisphere where you head south for fun in the sun.

We drove through Coffs Harbour on the banana coast, where we saw the first of what I hope will be many of Australia’s famous “Big Things.”

Our Aussie friends Lynda and Rae had clued us in to these roadside amusements – giant replicas of random things that become the centerpieces for cafes and amusement parks. On the banana coast, of course, it was a Big Banana. 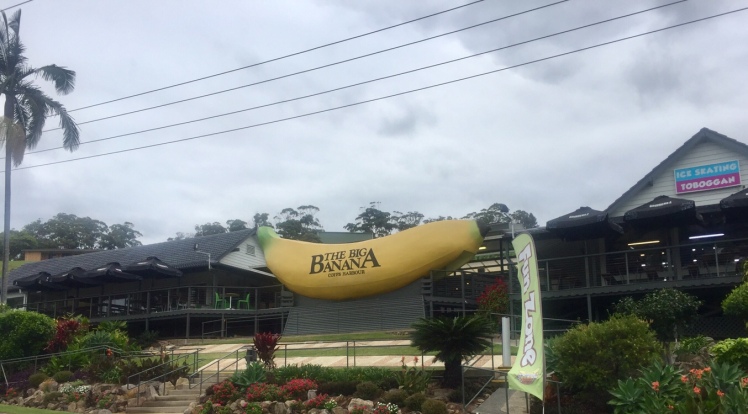 There is also a Big Prawn and a Big Pineapple yet ahead of us. Alas, we just overshot the Big Axe this morning. One can dream of a Big Frog, but I’m just not sure. Although, while they were peppering us with all the ways we could die in Australia, a national pastime with tourists I’ve realized, Rae and Lynda did mention poisonous dart frogs, so maybe there is hope for my Big Frog yet.

Interesting signs we saw along the way:

When we read about Byron Bay, it sounded fantastic. A little throwback town with a hip cool vibe. What we found when we arrived was a town bursting at the seams with tourists and trendy cafes, spas, and shops. It wasn’t really quaint like Port Mac had been and there were way more tourists than locals.

We found a camping spot and were grateful for that because it turns out that the Blues Festival starts tomorrow, thus the over abundance of tourists. Beginning tomorrow an unpowered camp site would have set us back nearly $100. As much as we love the Blues, we don’t want to be singing it when we are broke, so we will be moving on. 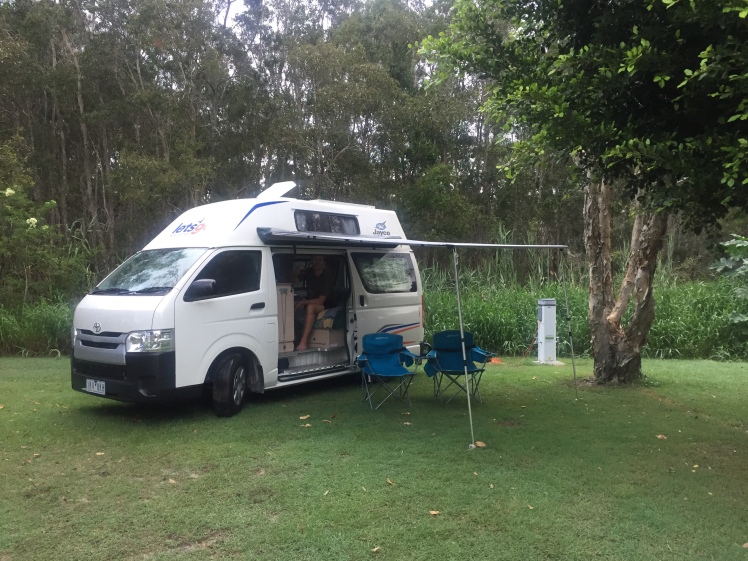 Our camp site in Byron Bay

We do love this little camp site that is surrounded by nature though, including our neighbors the wild turkeys that prowl around trying to get into campers’ things and the bats that appeared to flood the sky as the sun went down.

This little fella was stalking us.

Next stop: Tomorrow we will head further north to get away from the crowds and find a little campsite on the ocean with any luck. Maybe stop at a gin distillery along the way. Then it’s on to Brisbane, the capital of Queensland!