In a throwback to the first six months of our sabbatical, when we spent a good portion of our time on various camping adventures and road trips through North America with our Freedom Machine, we opted to tackle the eastern coast of Australia in a camper van.

Our ultimate destination is Cairns, a jumping off point in Northeastern Australia to see the Great Barrier Reef. Many people take a few months to do this trip, but we will be covering about 2000+ miles in 14 days. Certainly not impossible, but also not a whole lot of time to dilly dally or settle in for too long. Australia is big, just like the US.

We didn’t do a ton of research. We just figured we would go with the flow. We had a general route picked out – we call it north – and we had a list of towns to see on the way based on what other bloggers had to say. But there was no way to see it all in two weeks, so we had to stay flexible and see what would happen along the way.

We got an early start out of Sydney, planning to drive for just few hours to our first stop in Nelson Bay, where we would stay the night at a caravan park (ie RV Park) or a free camping site if we found one.

Well, there were a lot of unexpected surprises along the way that extended that drive from 2 hours to 8 hours. We rolled in to the seaside town of Nelson Bay, at the tip of a long peninsula, around 4pm.

On the way there we took a side stop to Kurri Kurri (means kookaburra in Aboriginal language), a little throwback town that was having its annual Nostalgia Festival. What a trip that was! 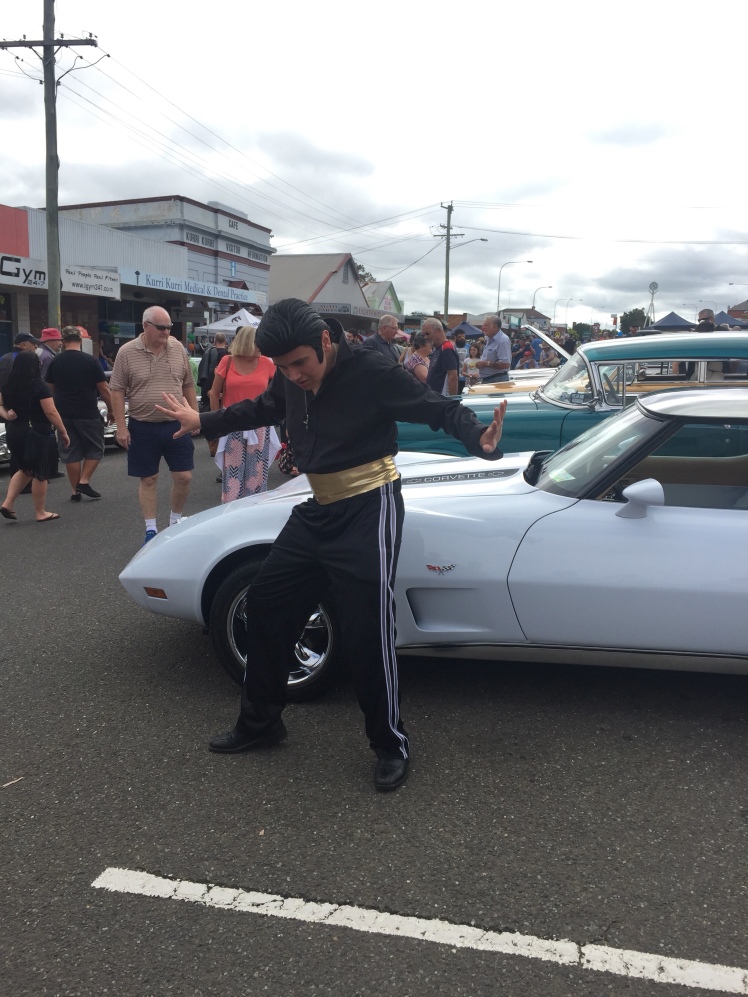 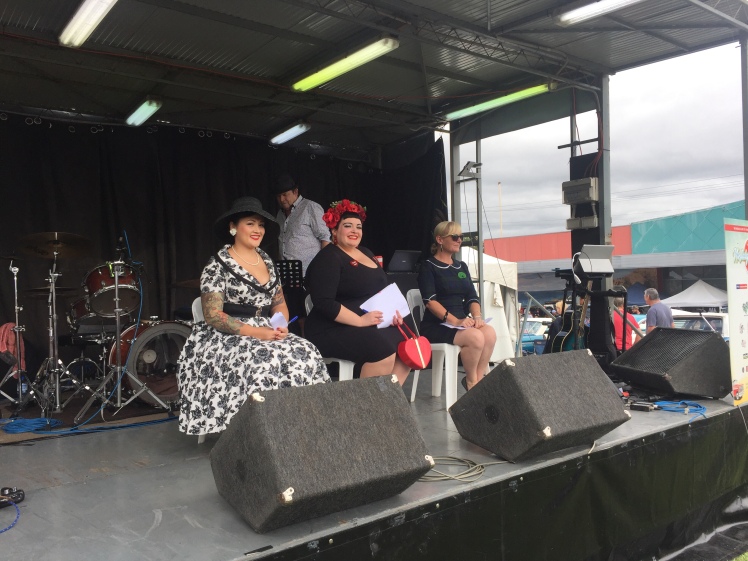 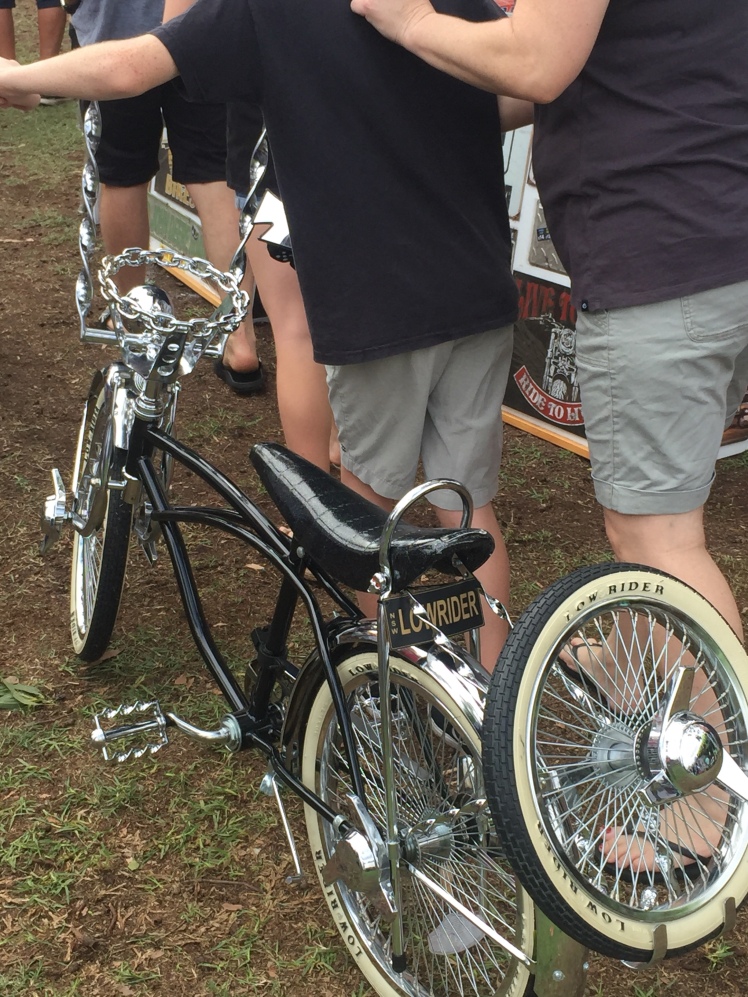 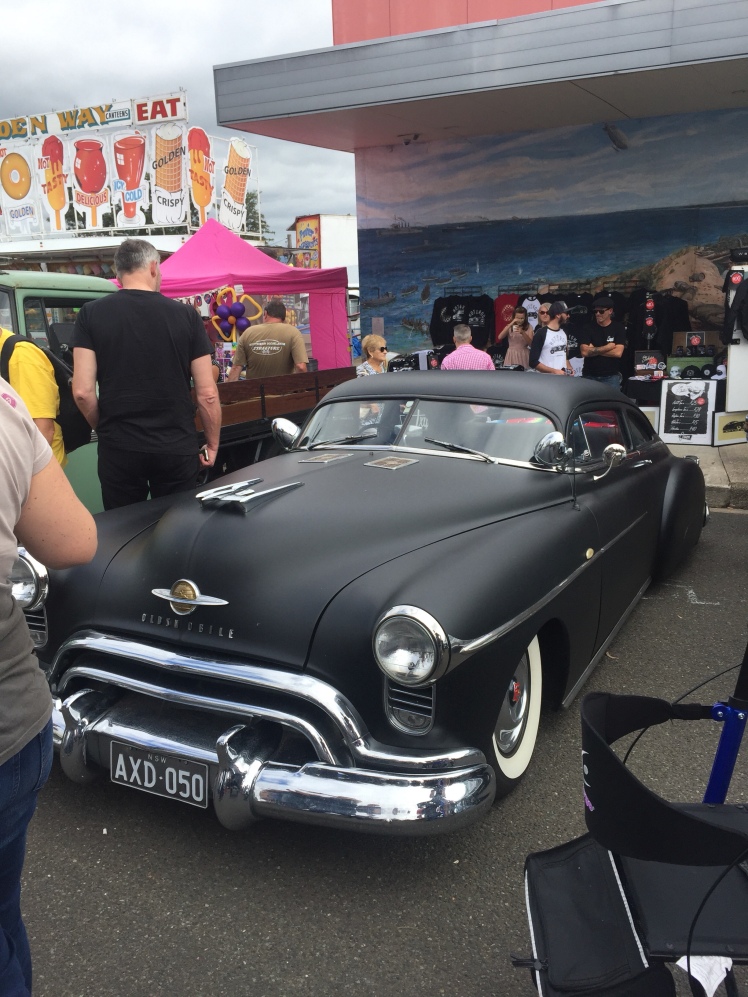 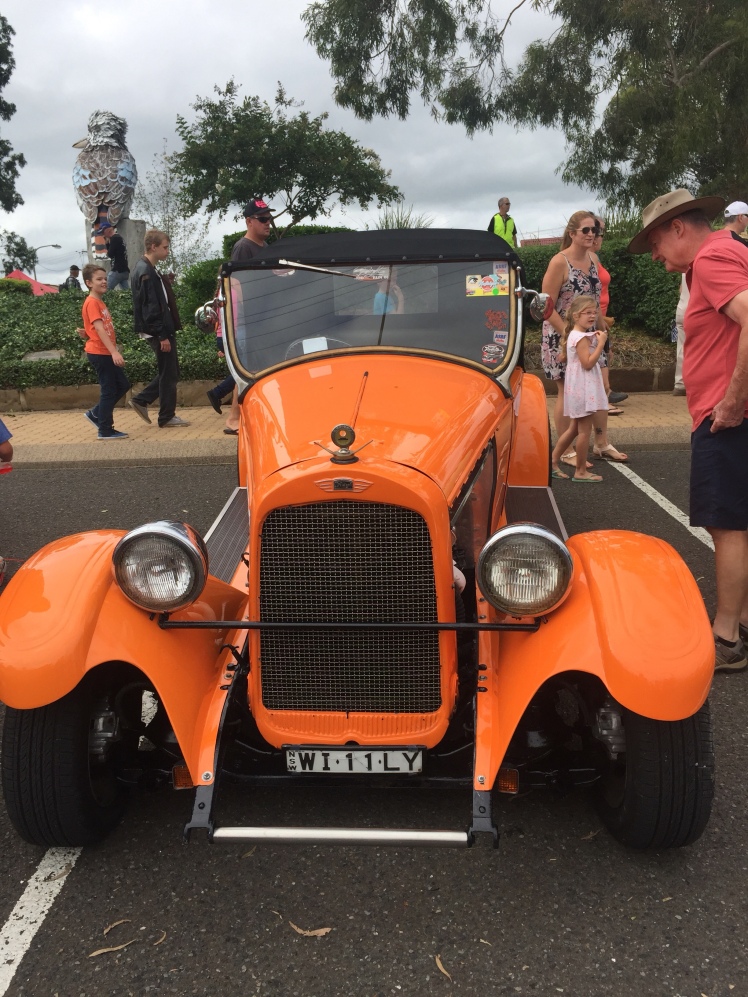 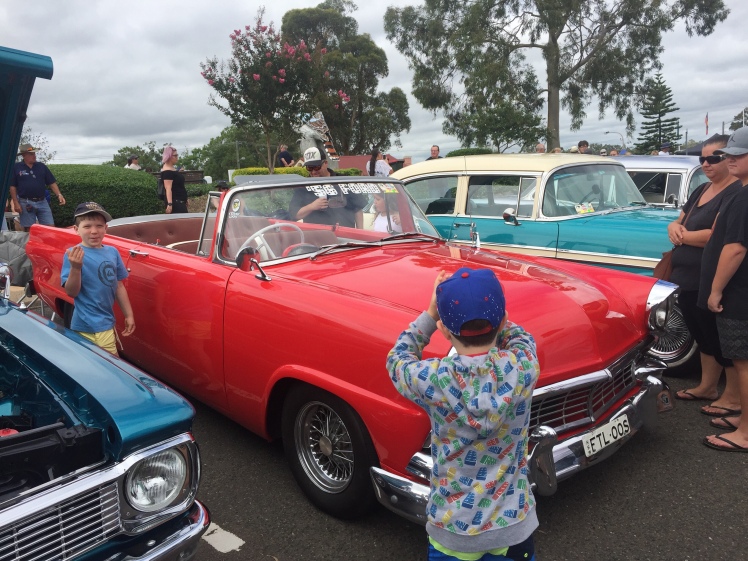 Then we backtracked a little ways to the Hunter Valley wine region to visit a winery for a tasting. We picked up a delicious bottle of Rosalie Joan Verdelho that we called “sunshine in a glass.” 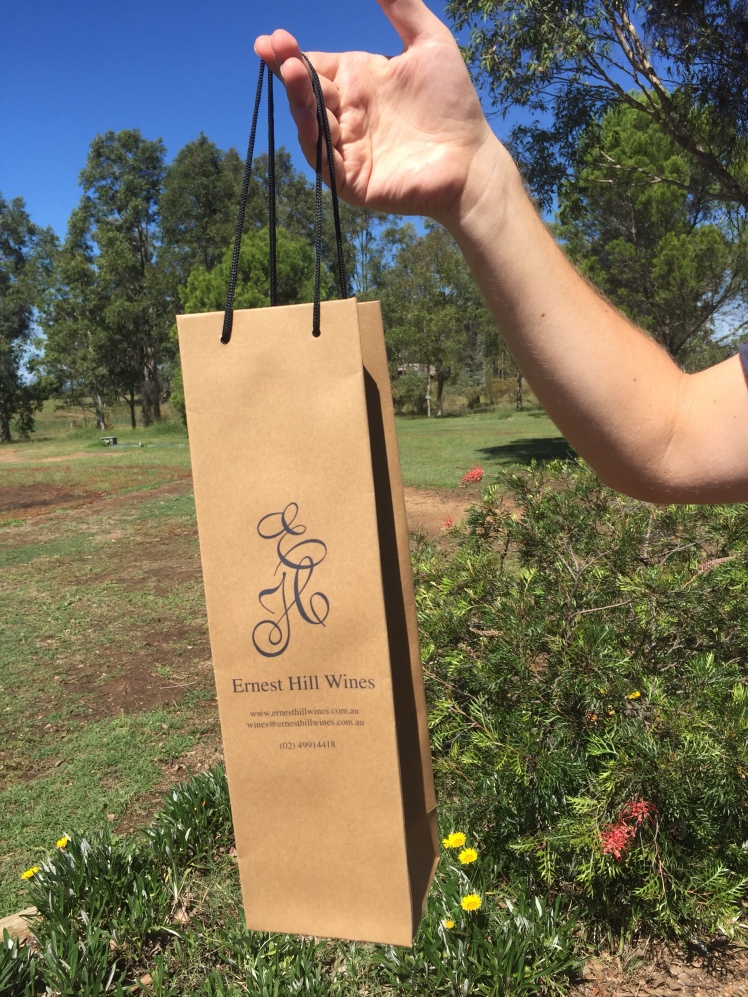 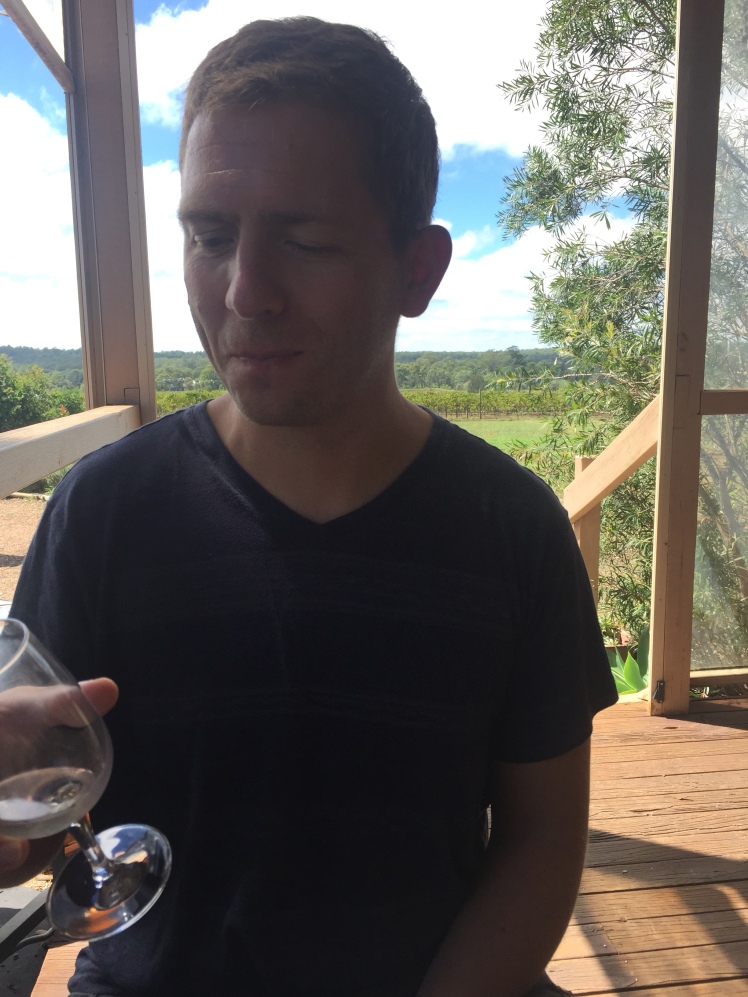 Once we finally arrived in Nelson Bay around 4pm, we had an early dinner on a surprisingly deserted Main Street and then walked around the Marina and shopping areas looking for a place to log on to WiFi so we could find a campsite. Oh the futility! 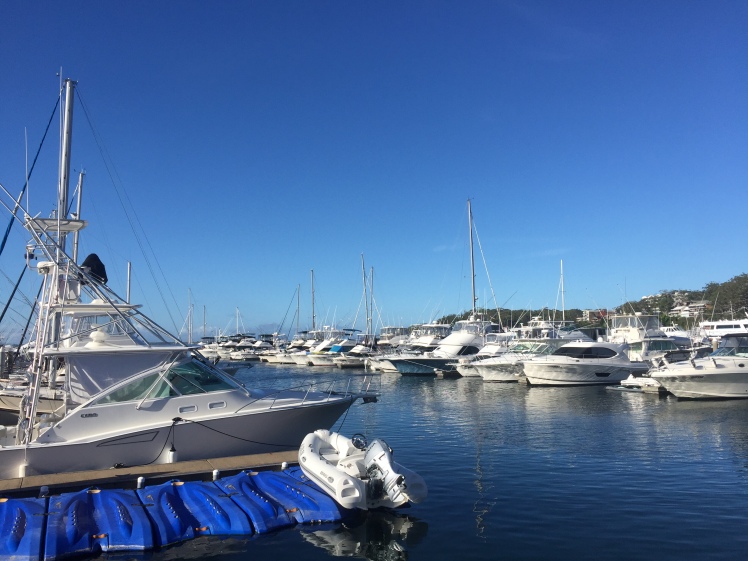 Apparently, offering WiFi to tourists became too expensive for this little remnant of a town at some point (that’s what a bartender told us anyway), so although signs still boasted WiFi hotspots, no one had them active any longer.

So, we drove around for about an hour, circling the peninsula, but all the obvious caravan parks were closed or full, and we needed WiFi to find the free ones. Finally, we looked at each other and said, “Let’s just get the heck out of here!”

We backtracked to the highway and kept right on heading north until we came to a rest area, where we pulled in and stayed the night for free. Not too glamorous, but it worked.

The next morning, we had another unexpected encounter right off. Before Trent even had a chance to put on pants, a German transplant was “at our door,” asking us where we were from and giving us advice on our journey.

He was hilarious. He even had a typewritten handout of all the things in Australia that can kill you if you aren’t careful. I imagine him driving from rest area to rest area up and down the Australian coastline warning innocent tourists not to forget to lift the toilet seats to check for deadly redback spiders (which may or may not have a red back by the way). 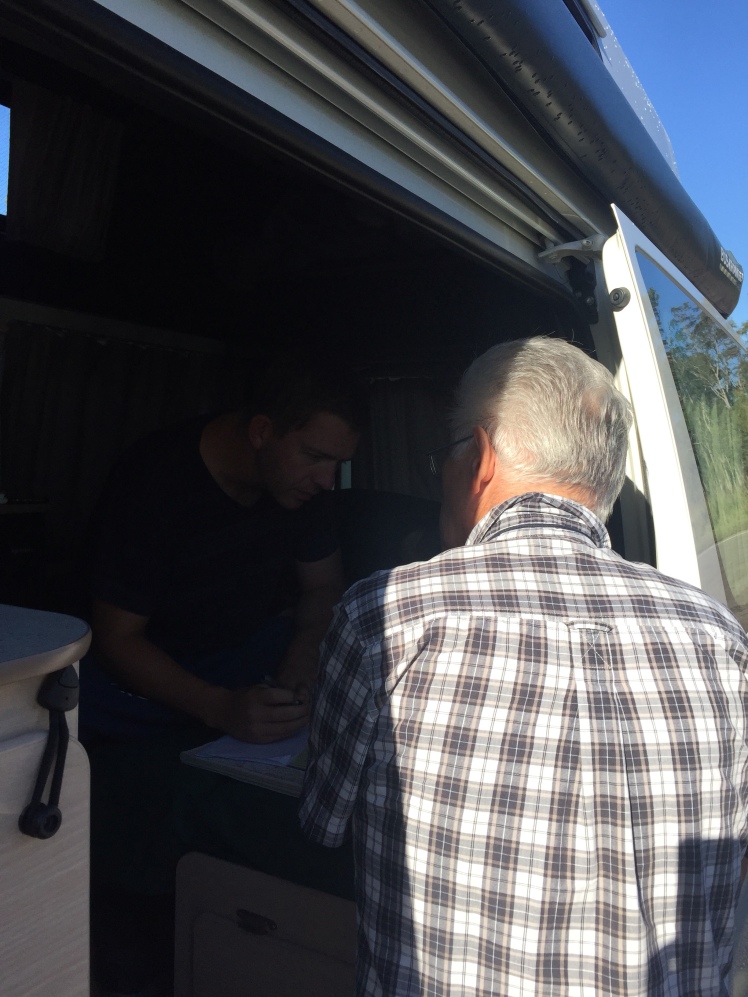 Nonetheless, he gave us some good tips for our passage, and he may well have saved my life as long as that killer redback spider actually does have a red back. Oh, what the heck, how ’bout I just avoid ALL spiders. And all snakes. And all crocodiles. And all beaches (rip tides, you know, and box jellyfish and octopi). Oh, it’s going to be an interesting couple of weeks in Australia!

We arrived around 1pm in Port MacQuarie. The drive was a pleasant coastal meandering that took us through some scenic National Park areas. I think my driving may have given Trent and his heart a moment’s pause. But we both survived. I mean, the German said nothing about dying while taking a turn to sharp in a hi-top.

Port MacQuarie is heaven. We unpacked our wine and settled in to people watch from our campsite right by the breaker wall. We are a 5 minute beachside walk from either the beach or town. And the liquor store. We had a fun first night and decided to extend our stay to two nights because who knows if the next town will be a bummer like Nelson Bay. 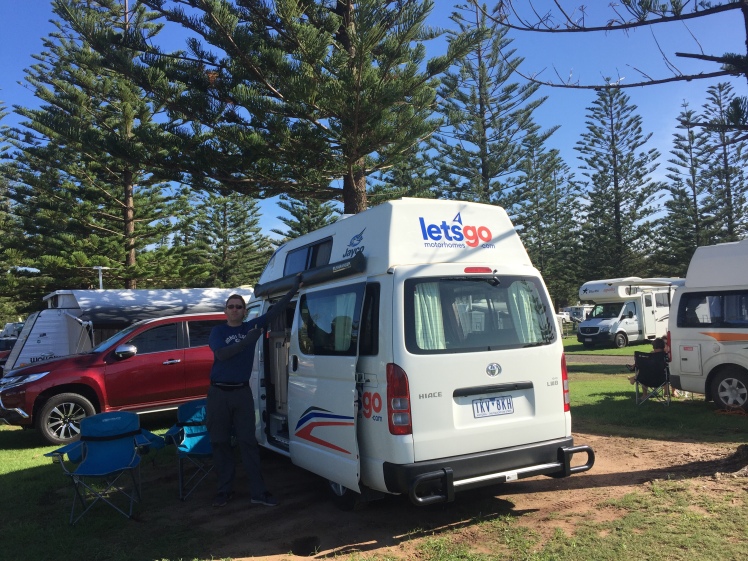 We went to the Koala Hospital on our first afternoon, one of a kind in Australia. It takes is sick and injured or abandoned koalas, rehabilitates them and then releases them back to their home territory once they are well enough. Those that are not able to return because of permanent injuries are sheltered and cared for in a natural environment. It’s pretty cool. 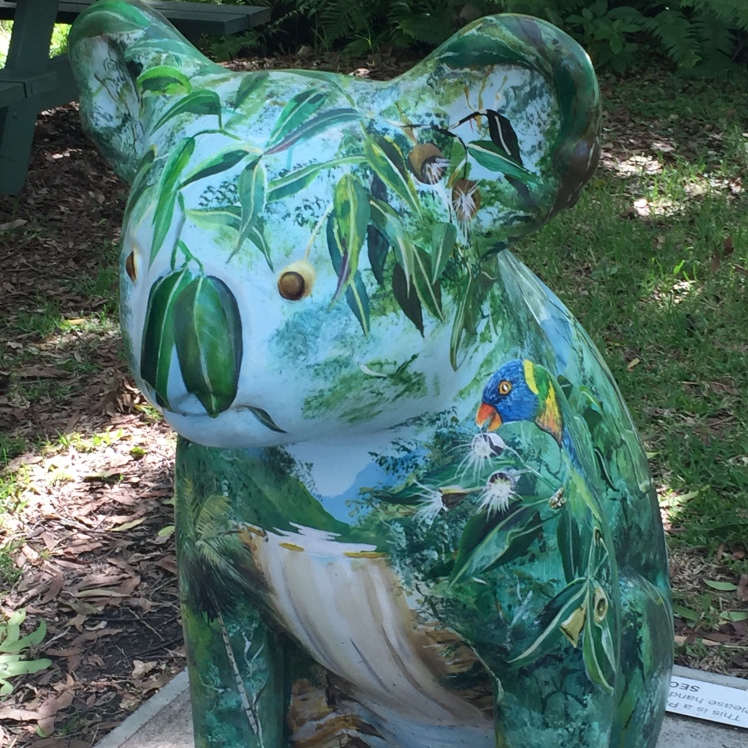 Most of the koalas that come in are injured from bush fires, motor vehicles, dogs, or have a disease common to koalas that causes blindness. A few koala facts: they sleep up to 20 hours a day and poop up to 200 times a day. What I took from that is don’t stand under eucalyptus trees.

We spent the late afternoon and evening chatting up the locals who are exceedingly friendly, and who let us pet their dogs. We walked to dinner for fresh fish and local beer and wine. It’s pretty close to perfect, and I can only hope it keeps getting better. One thing I know for sure is that there will be more unexpected surprises as we venture north. I just hope none of them bite me.

Next stop: Somewhere north of Port Macquarie, hopefully Byron Bay, which is about 200 miles from here and supposed to be hip and fun.