We awoke early in our makeshift free camp site south of Brisbane after falling asleep to the strangely coherent sounds of cars on the highway, someone strumming a guitar, and mobs of twenty-somethings laughing about things they won’t remember in 20 years (but they will remember the feeling of freedom they had).

The guitar was by far the best at lulling me to sleep, but what I really wanted to do was jump out of bed in search of the folksy hippie who was surely cradling it. The plucky sounds made me think back to the many camping trips of my own twenty-somethings in New England. My friend Jessie singing Strawberry Wine and all of us begging our friend Michael for one more verse of IWanna Be Sean Connery.

Good memories and another reason to love Australia on the cheap. We wouldn’t get this experience if we could afford to live large here. Heck, I can’t really imagine what living large in Australia means, other than big waves and big beers. We are taking in every second with a smile, having a ripper of a good time as the locals say.

Anyway, despite the smell of cheap cigarettes wafting into our camper throughout the night, we slept well in this free roadside camp site.

Brisbane was only about 30 minutes north on the highway. Our plan was to get to the city, check out the free Gallery of Modern Art, maybe the free Botanical Gardens (weather permitting), and then a drive in movie. 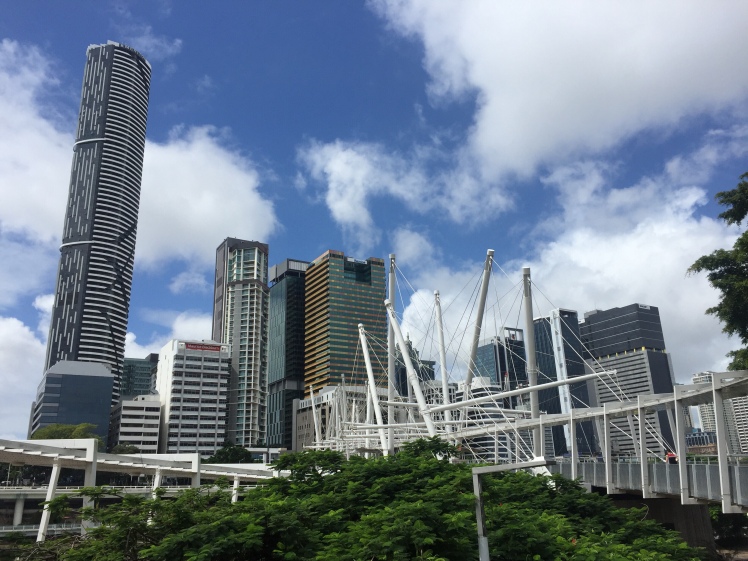 View of Brisbane downtown from the Gallery of Modern Art across the river. Funky pedestrian bridge in the foreground.

We really liked Brisbane. The city was very clean, like the rest of Australia; very welcoming to pedestrians, cyclists, and public transportation; and very pretty. The downtown buildings were clustered along the Brisbane River, which showcased a number of cool bridges, including a strikingly modern pedestrian bridge. The river cabs shuttled people up and down the river, and a very well-maintained walking/biking path ran along both sides. 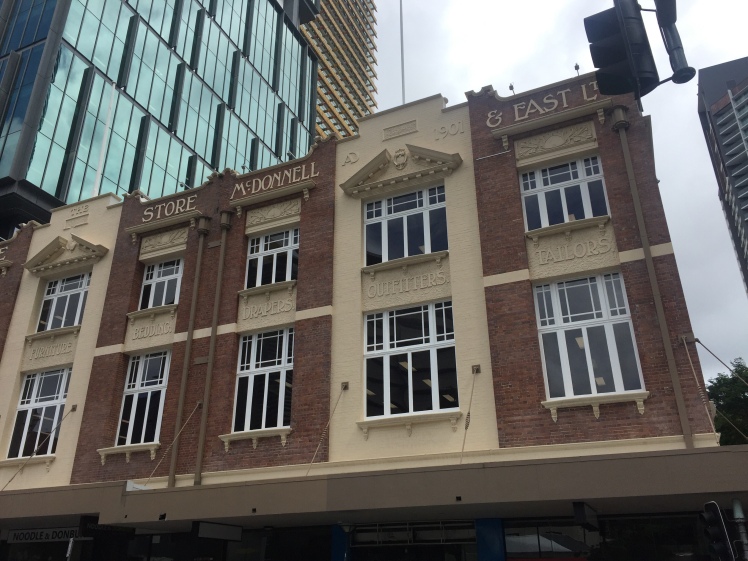 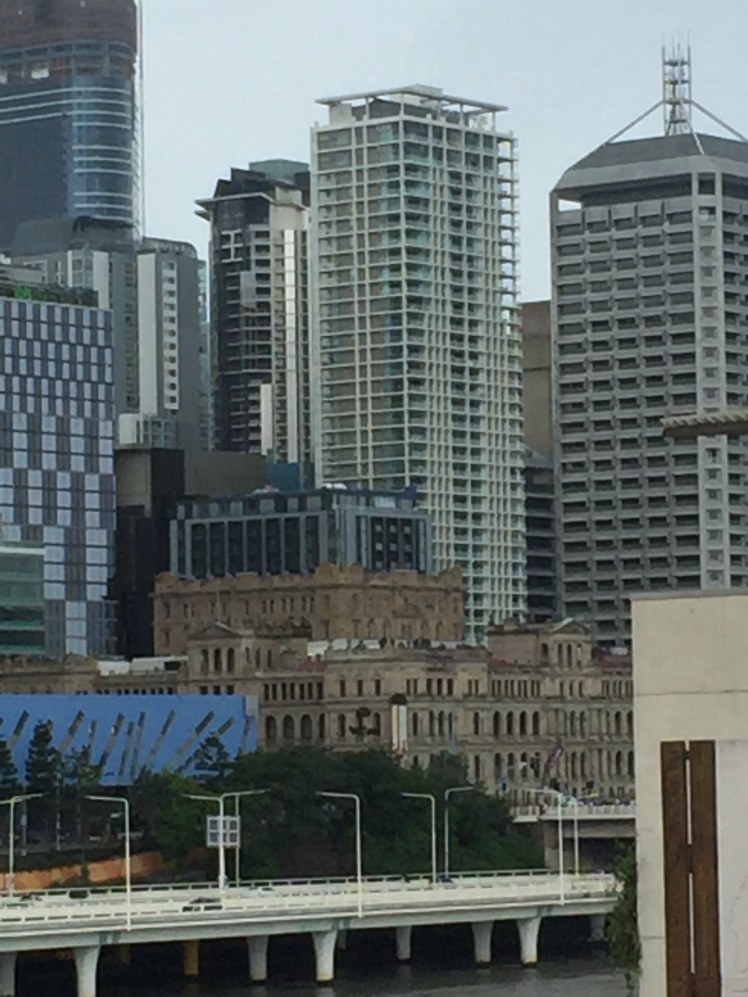 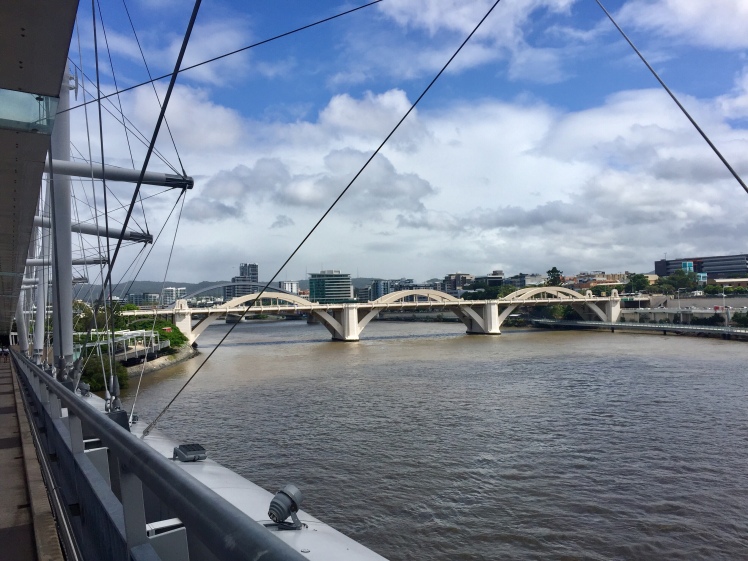 One of my favorite things was the juxtaposition of the new and the old. The historic buildings were very well preserved and looked as well-tended as the modern sky scrapers. I generally love a city that can seamlessly incorporate progress and preserve history equally well. Boston does that for me too. Except Government Center in Boston is an atrocity that should be demolished, but I digress. 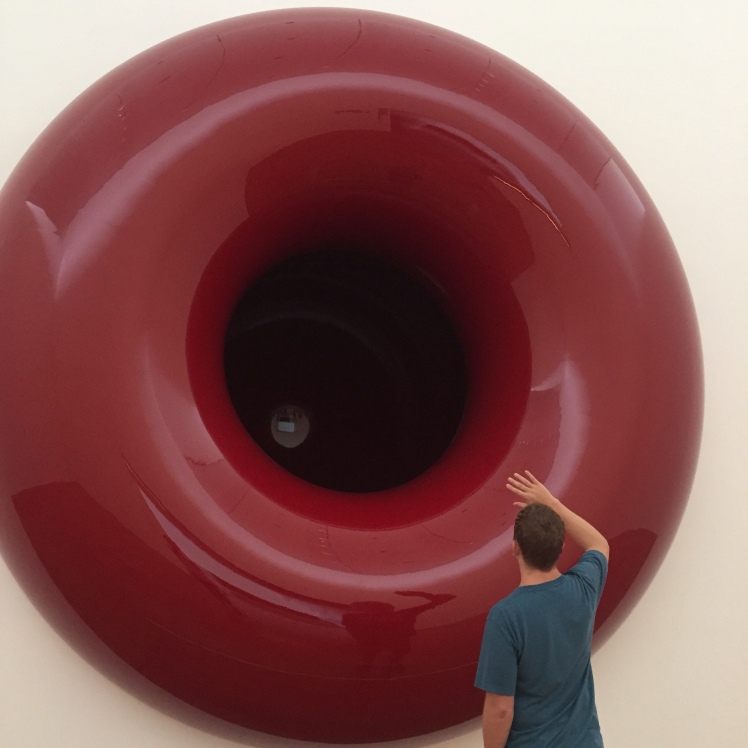 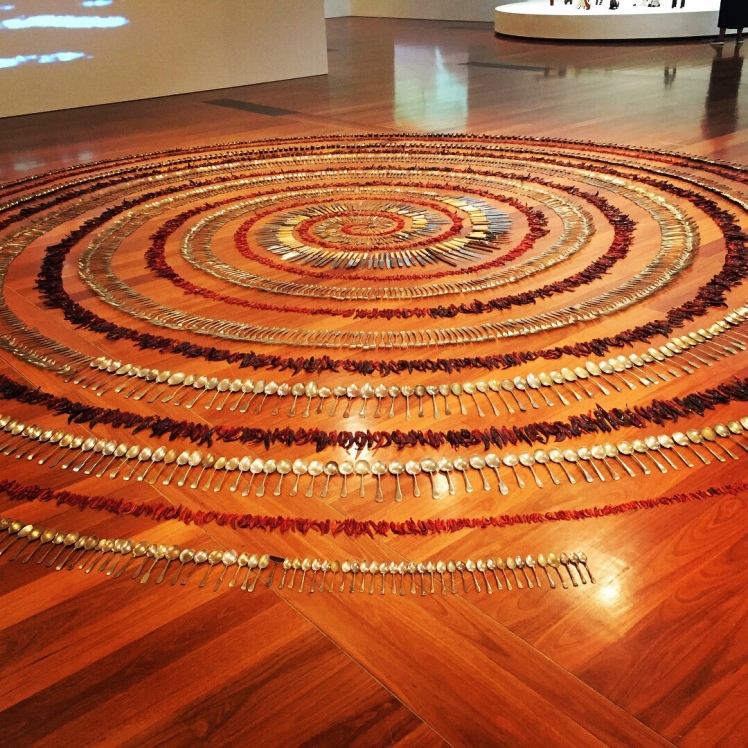 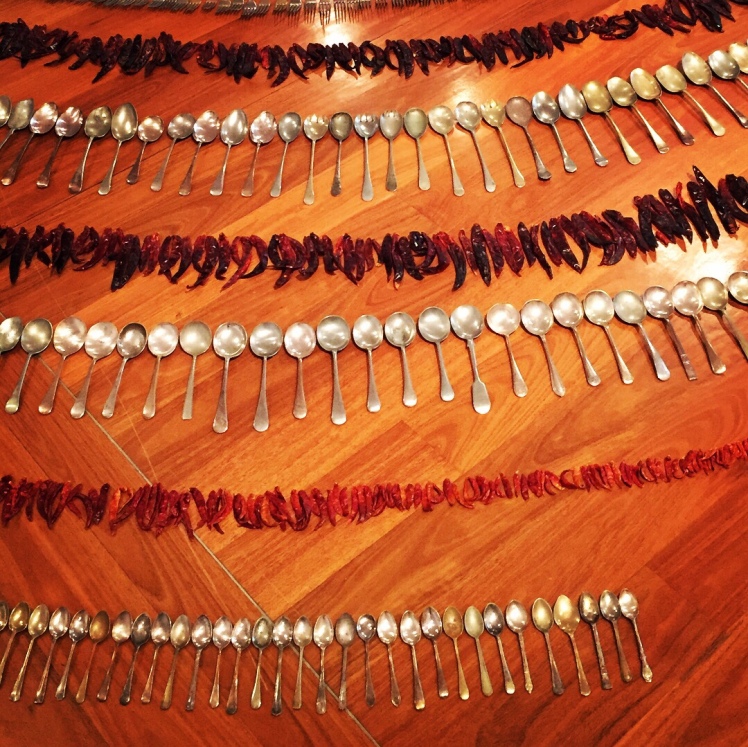 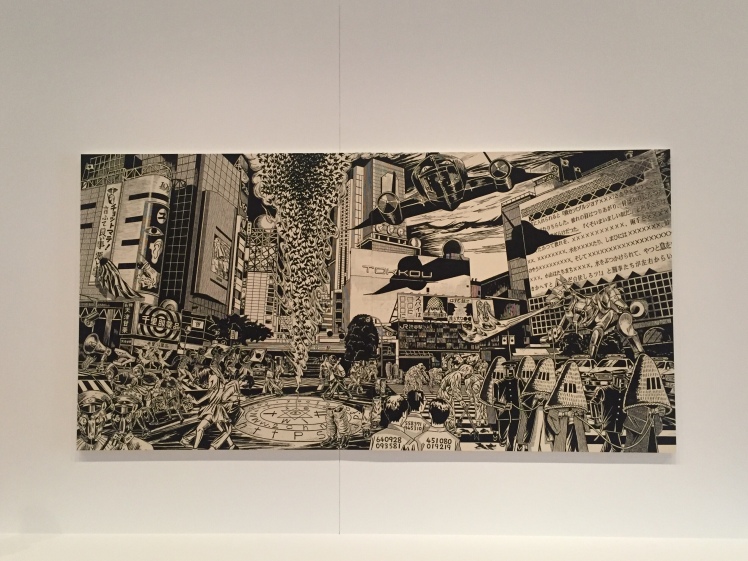 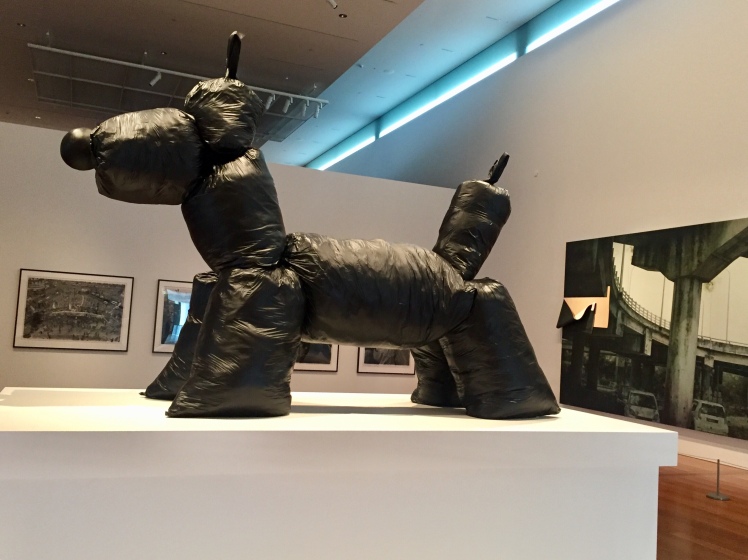 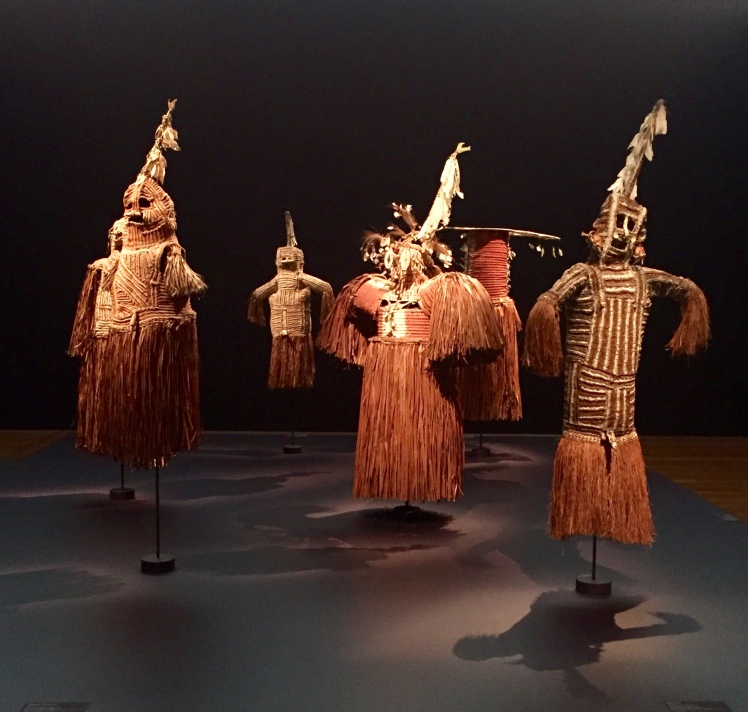 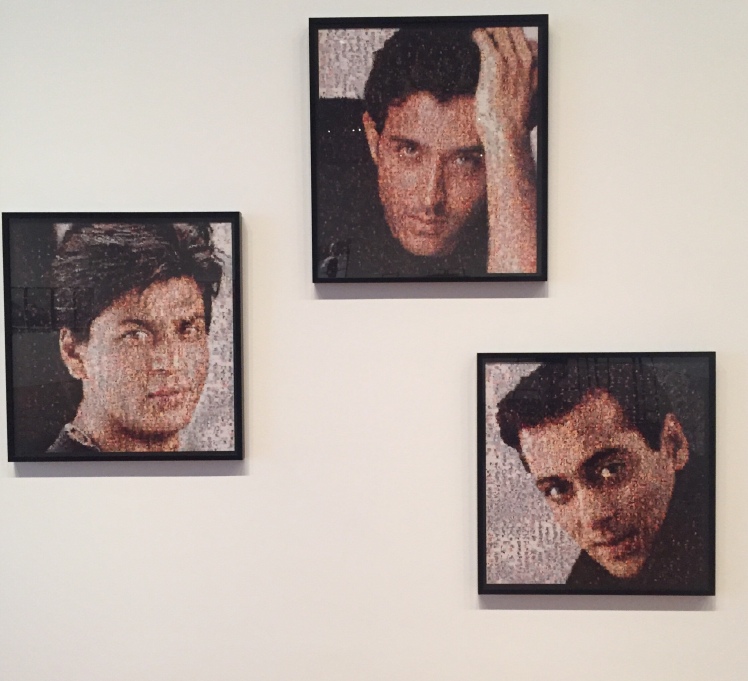 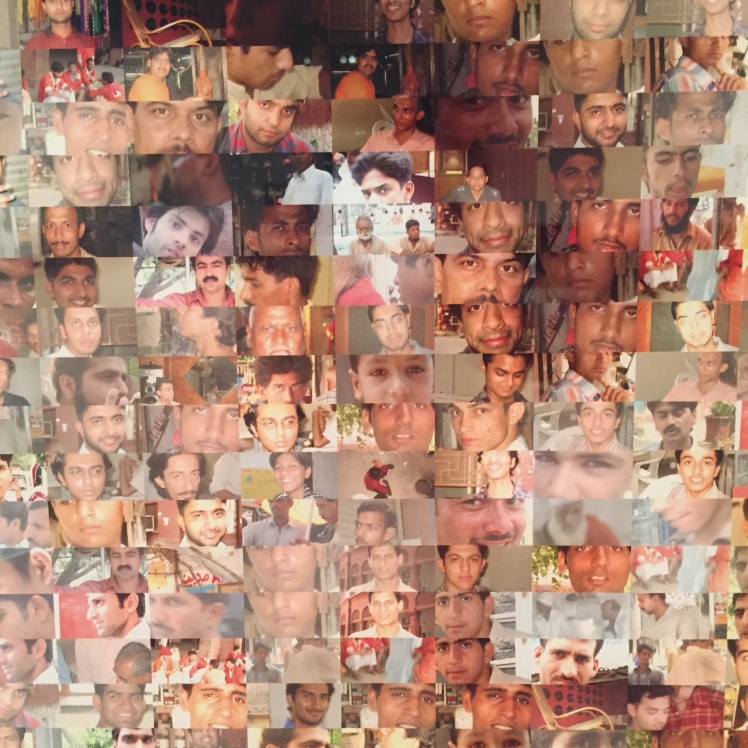 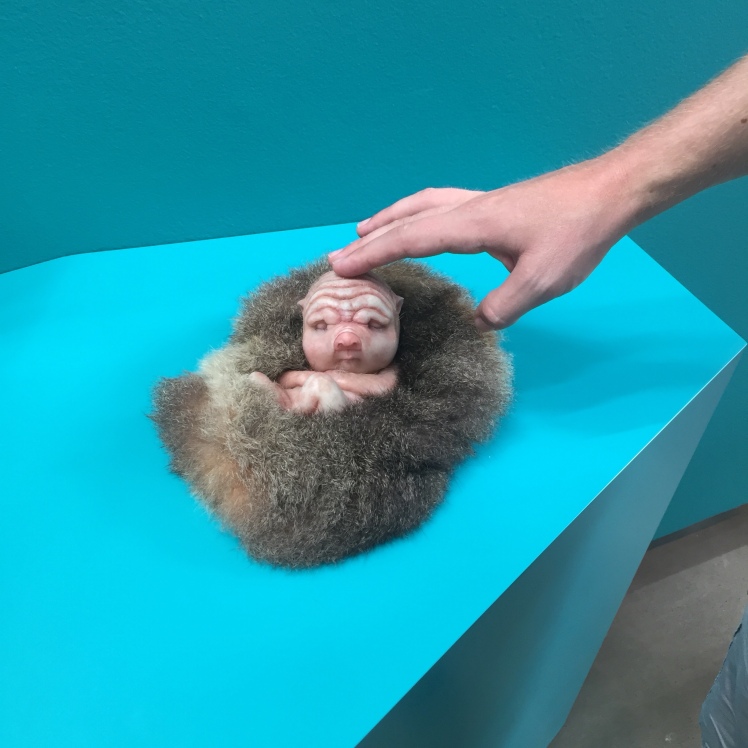 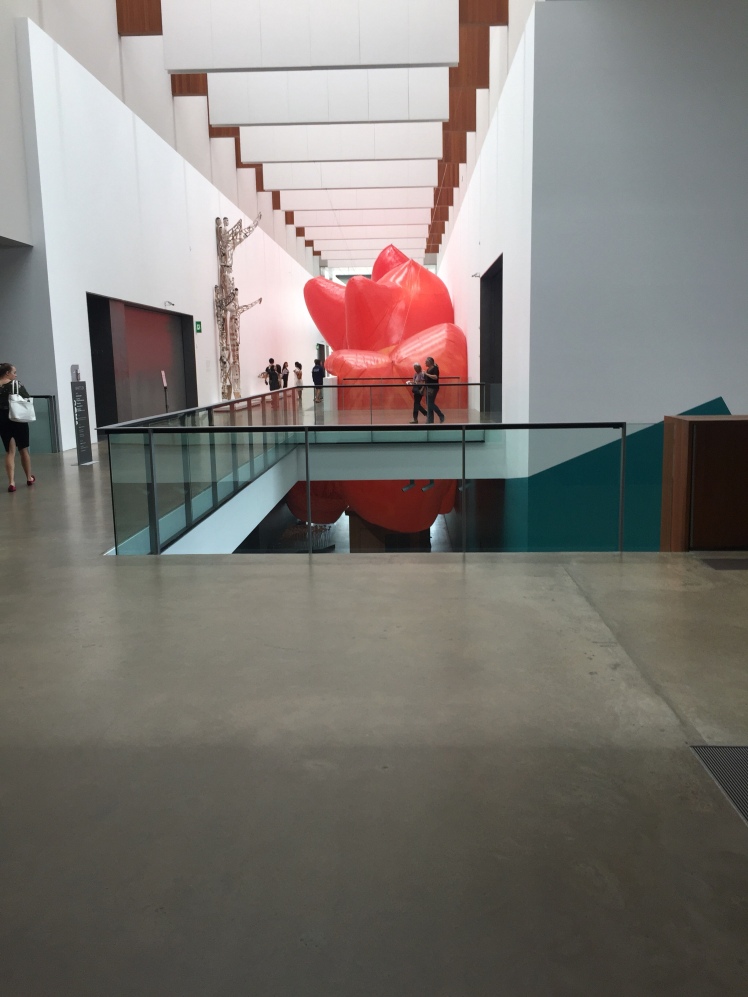 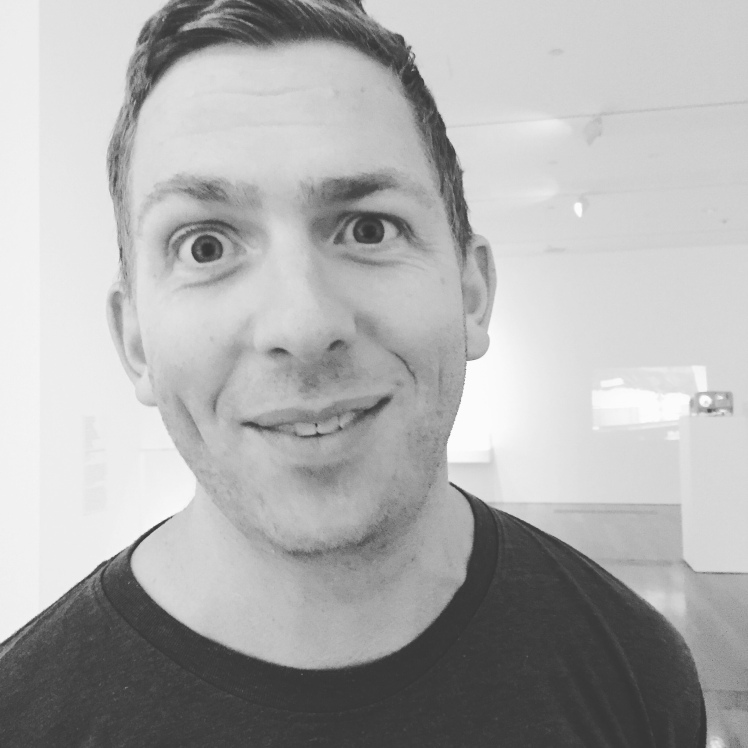 Modern art isn’t necessarily Trent’s thing, but it was FREE!

Well, the weather had a different plan for us, so after the art gallery, between downpours, we hurried back to the camper van, made some sandwiches, and kept heading north. In our hearts, what we really wanted was to spend more time in nature anyway.

We picked out a cheap camp site near the coast, in what I’m going to call The Hinterlands (that’s a thing here) until someone corrects me. From what I can tell, any place out of town can be referred to as the Bush or the Hinterlands. And we are definitely NOT in town at this little campsite. 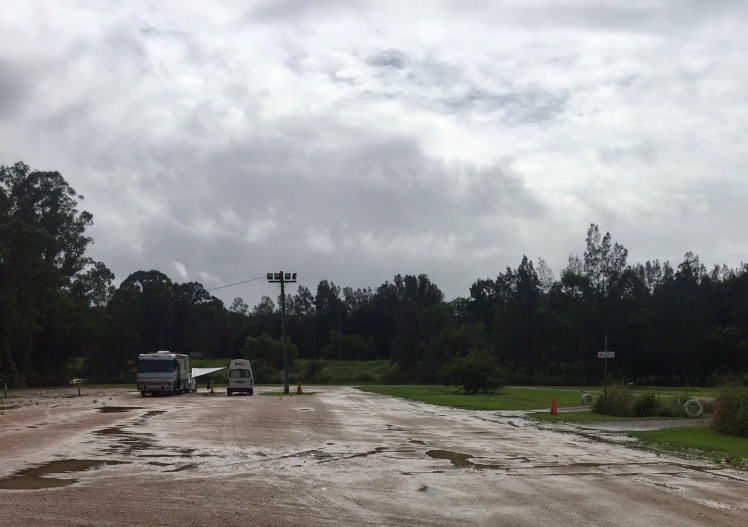 That’s our little van on the right. Hardly a soul…

We stopped at a beach for Trent to take a quick dunk before we reached the camp site. Tomorrow we will take a drive up and down this scenic area known as the Sunshine Coast, enjoy some more beaches, (maybe a pub), and probably return to our little $20 camp site for another night if we like what we see. It’s lotsa awesome to just take it one day at a time and not worry because it will all work out. The Aussies say “she’ll be right.” Yes, yes she will..

We love it here. Have I mentioned that Australia is awesome? Although at least three really loud trains woke us up during the night, we aren’t complaining. Because we are free and sleeping in a cool camper van in the Hinterlands of Australia, where TRAINS WOKE US UP AT NIGHT. Life is good.

Our camping neighbor, John (and his little dog Susie), told us that we have to stay another night here in Eumundi at the RV Stopover because The Market is tomorrow, and according to John (and Susie), it’s the best in Australia, or at least the best they’ve seen. So we are staying another night because John’s lunch recommendation in Noosaville was spot on, so we trust him completely. 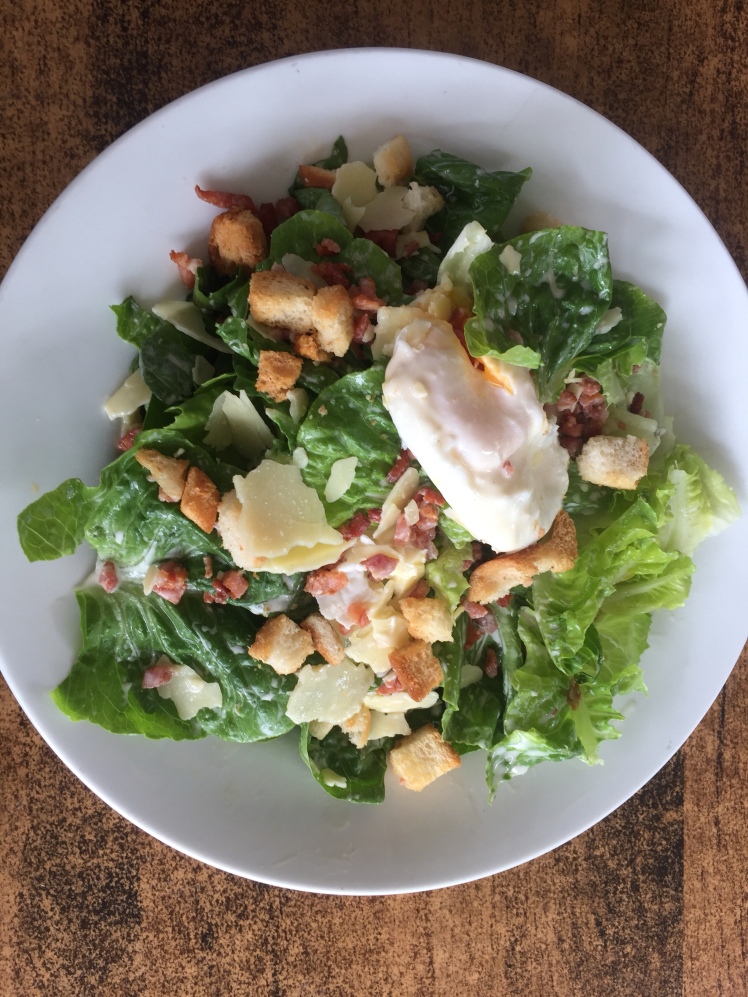 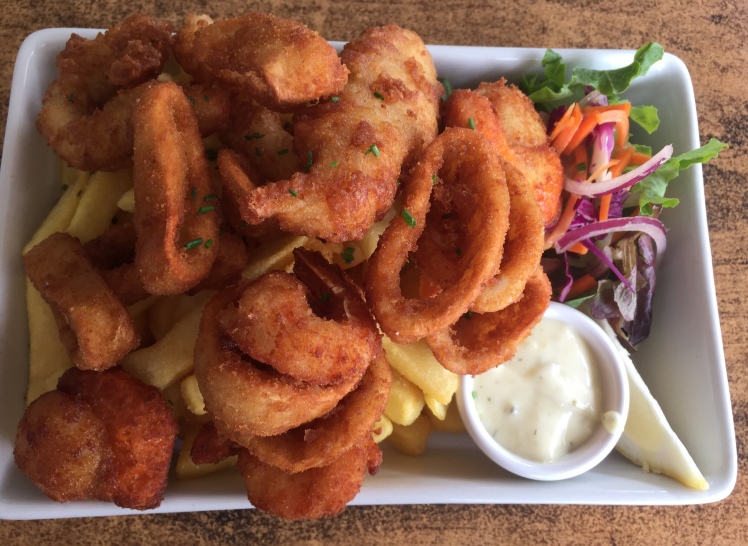 Local Fisherman’s platter at Maisy’s in Noosaville. So good! Oh, and salad.

Today we drove up and down the Sunshine Coast in search of sunshine. We swam in the ocean even though the beach said it was closed and dangerous. Everyone else was doing it, and there were plenty of lifeguards. Right? Seriously though. These waves are the most powerful I’ve ever felt. I can compare them to the Gulf of Mexico, New England, California, Belize, Jamaica. Probably more but the point is that they will suck you in and you can only pray that they spit you back out. Every time I saw a little kid swimming in the shallows I wanted to run up and scream “run for your life, kid!” 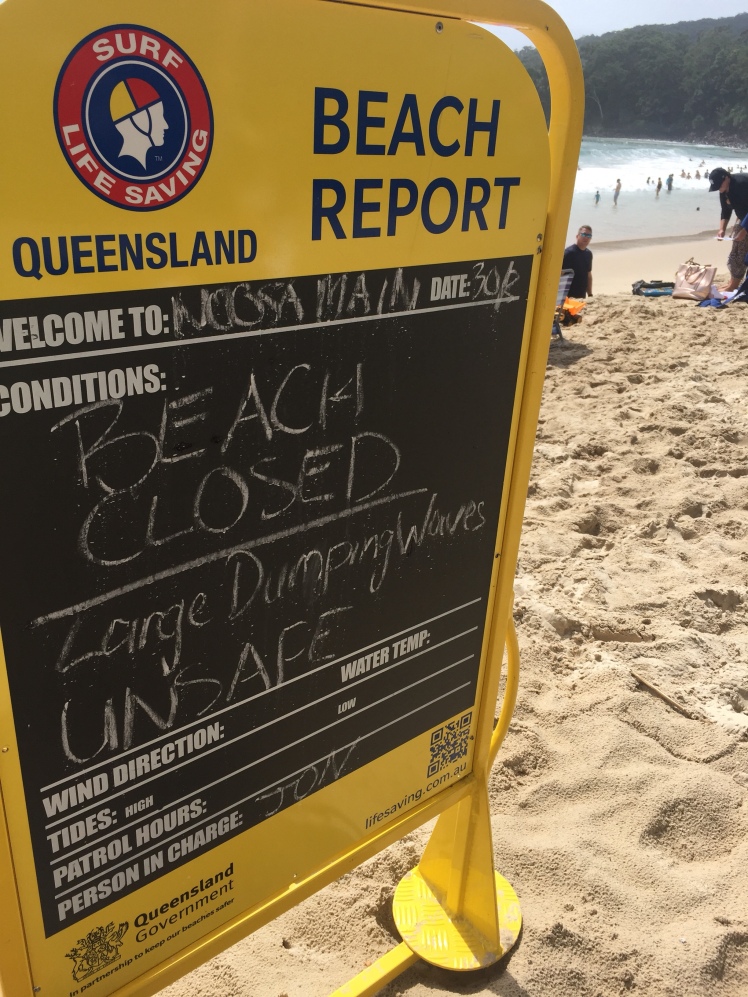 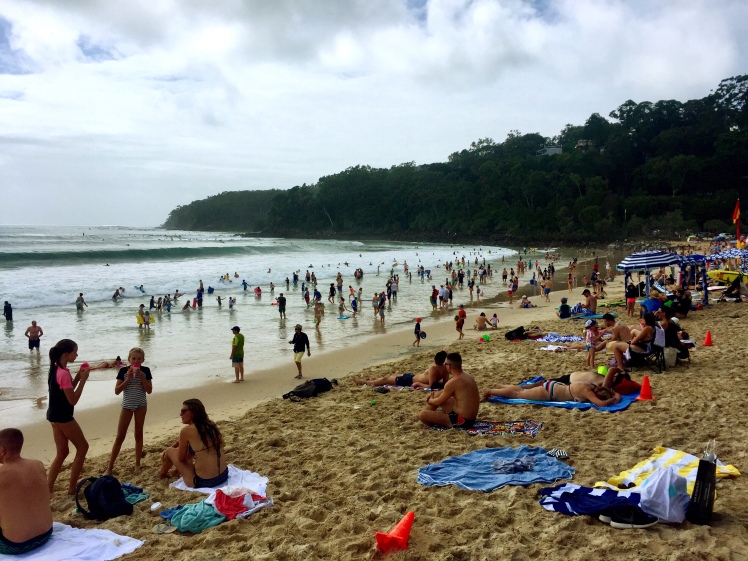 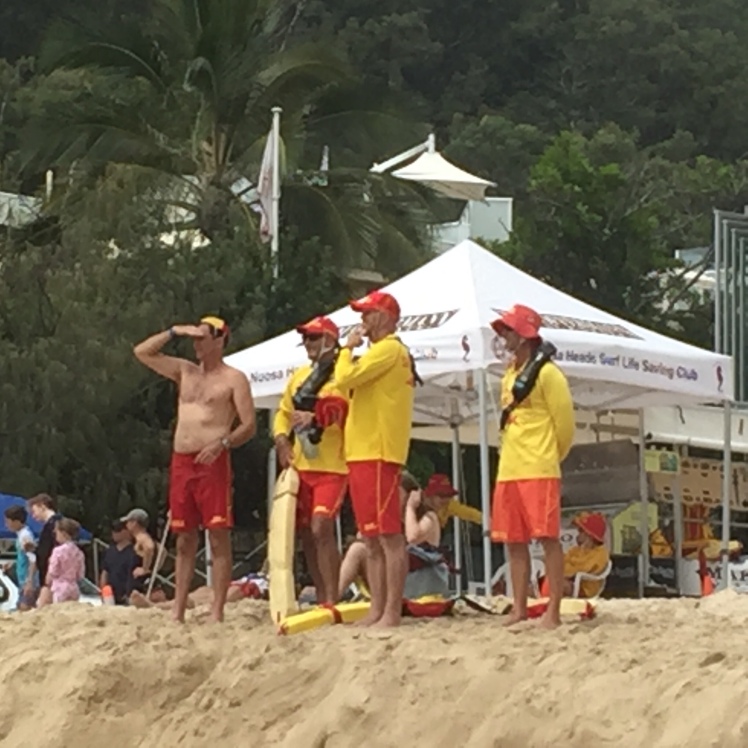 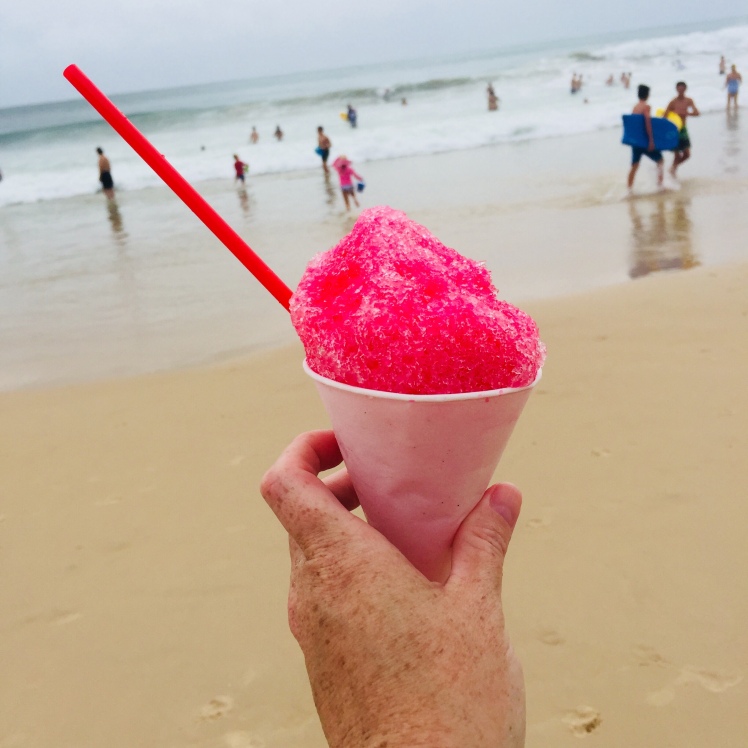 Again, I digress. We went for a long stroll on the beach in Noosa Heads, stepping over tiny jellyfish and listening to the sea chomping at the sand. It really was another great day. 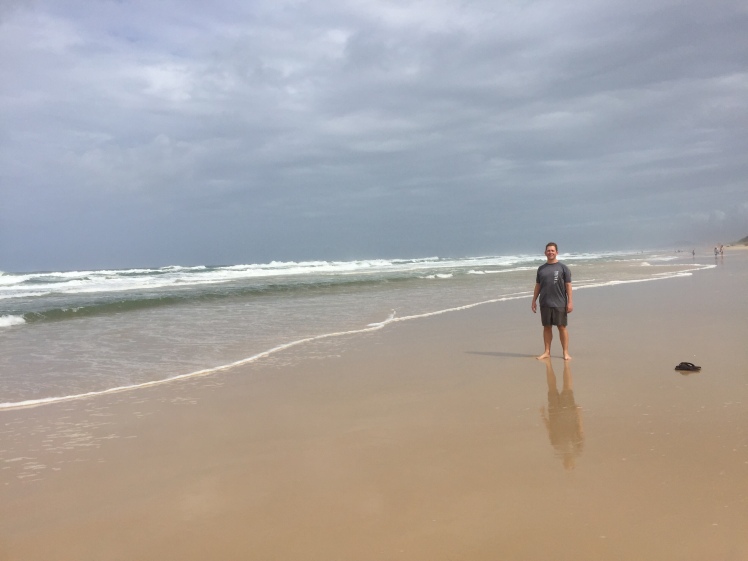 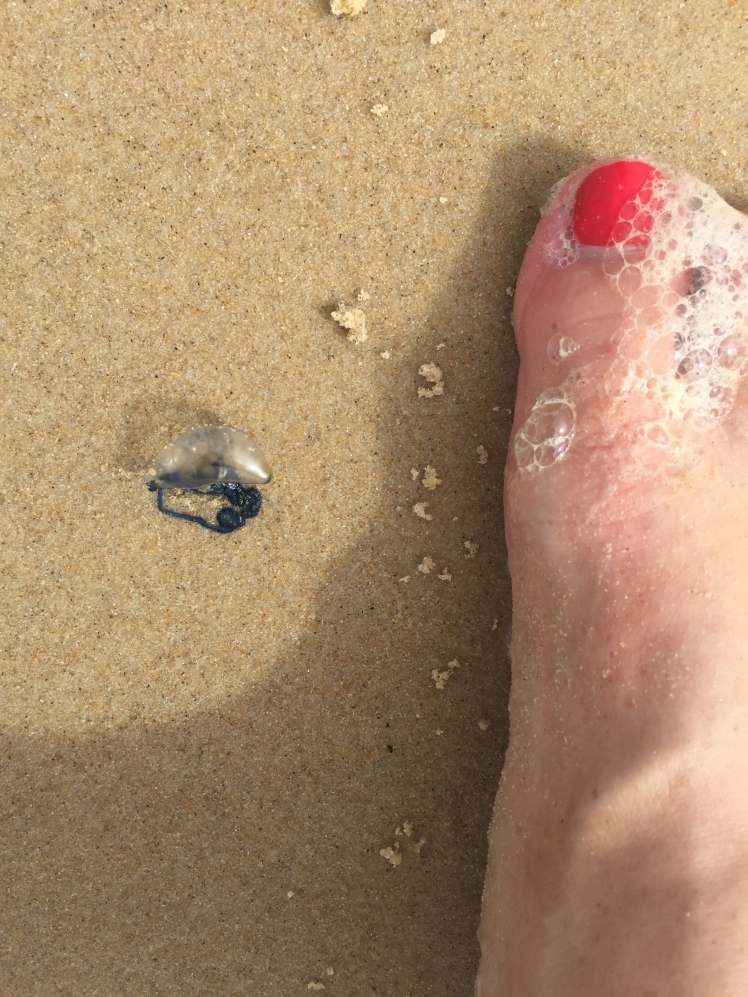 Baby jellyfish? They were all over. Turns out that they are called blue bottles. Not deadly but excruciatingly painful.

Then we came back to camp and put up our awning. Then a gust of wind blew it up and over our camper van, bending the poles, and in an instant costing us more money than we really had to spare. I cried. I lamented. I was mad that it happened.

Trent was a rock. He reminded me that every setback is an opportunity for growth and that the fact that we hadn’t fought when it happened but worked together to get everything back under control was a win. He’s right. This is life. This is Australia. And she’ll be alright. 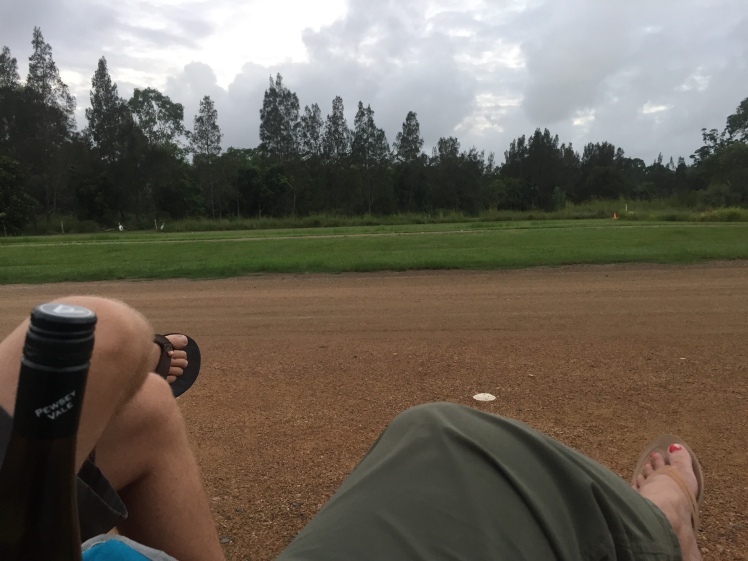 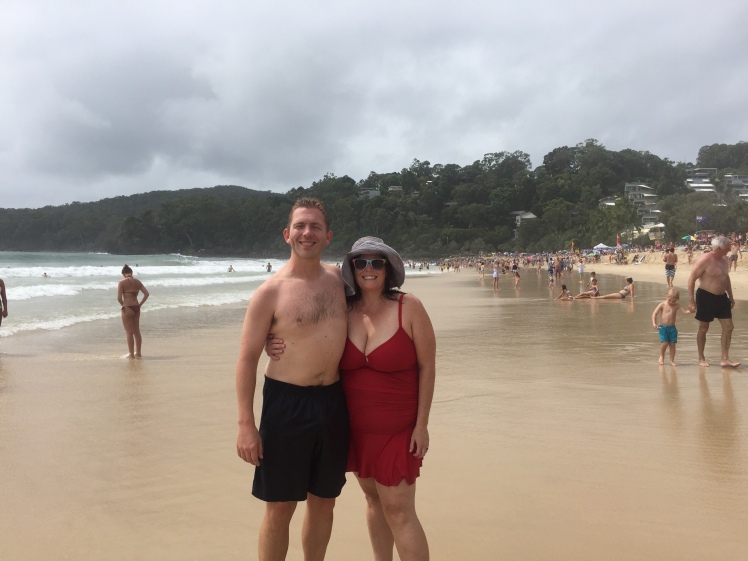