Before arriving in Singapore, the sum total of my knowledge of the city was based solely on 1) spare snippets shared by my husband from his time working on assignment there ~13 years ago, 2) the recent commentary by a young Singaporean couple with whom we dined during a cruise through Vietnam’s Halong Bay a few months ago and 3) random comments by a few expats we met in Thailand. That is to say, I actually knew very little but somehow felt like I knew enough to know that I would love it. As usual, I was right. Of course, we have loved nearly every destination in Southeast Asia.

Seriously though, this is what I had to go on:

After nearly five months exploring the incomparably less affluent countries of Southeast Asia, it sure felt weird to be rocketing down a super wide highway, looking out at twinkling skyscrapers and giant Ferris wheels. 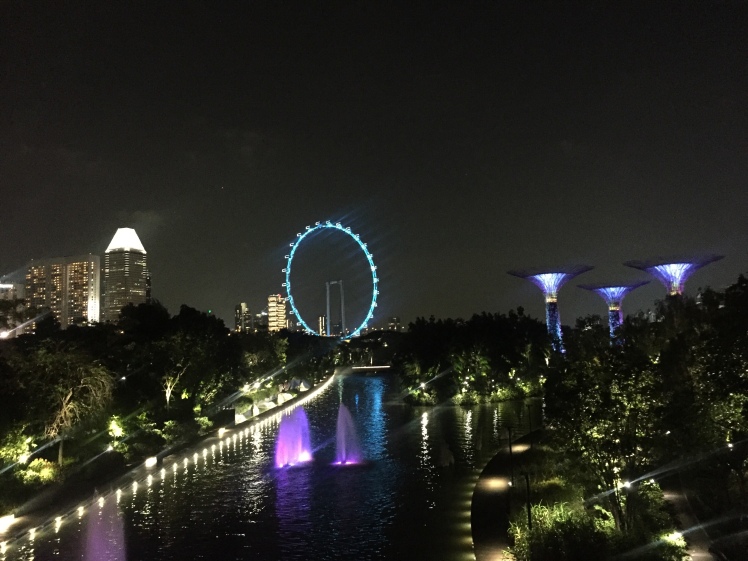 I mean, yes, we had spent time recently in Bangkok, and it too is a giant metropolis. But Bangkok still has grit. There is no grit in Singapore. And I’m pretty sure I’d be arrested on the spot if I tried to import any.

Toto, we’re not in Cambodia anymore.

The countries we had spent time in before Singapore had dusty roads and median annual household incomes somewhere between 1/60th (Cambodia) and 1/7th (Thailand) of the US, The annual median household income in Singapore is $83,000 compared to $60,000 in the US. And the prices reflected that whopping 38% difference. Ouch.

So, we stayed in a hostel in Little India for $50 a night (more than we paid for a few nice resorts in Thailand and Cambodia), which neither of us had done in more than a decade. In fact, the last hostel we stayed in was in Wellington, New Zealand while on our honeymoon. It was known as the nicest hostel in the world back in 2008. I hated it because it was above a wiener stand and all I could smell were burnt rubbery hotdogs all night long. I slept with Carmex mentholated lip balm rubbed under my nose to drown the smell. Side note: you couldn’t drown out that smell with all the tiger balm in Southeast Asia. But I digress. 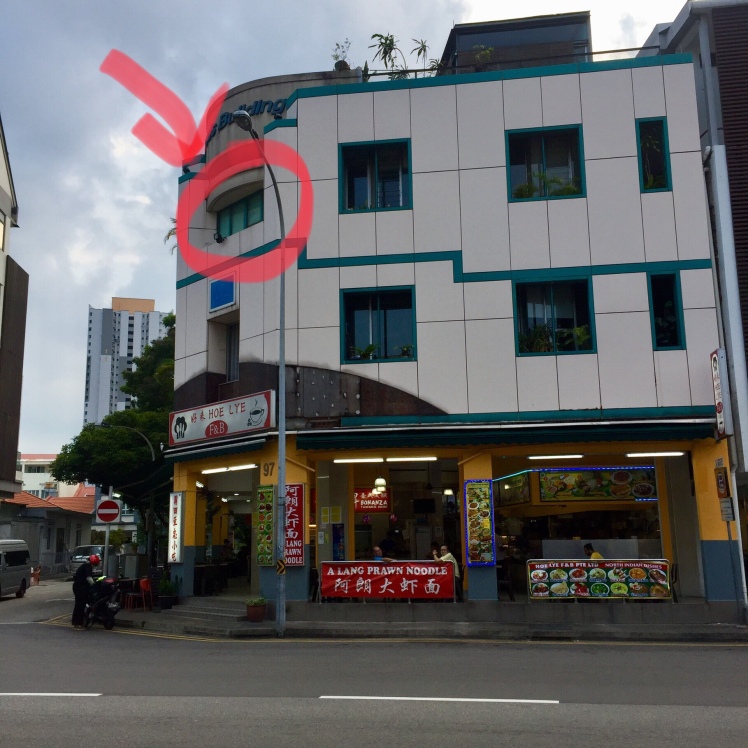 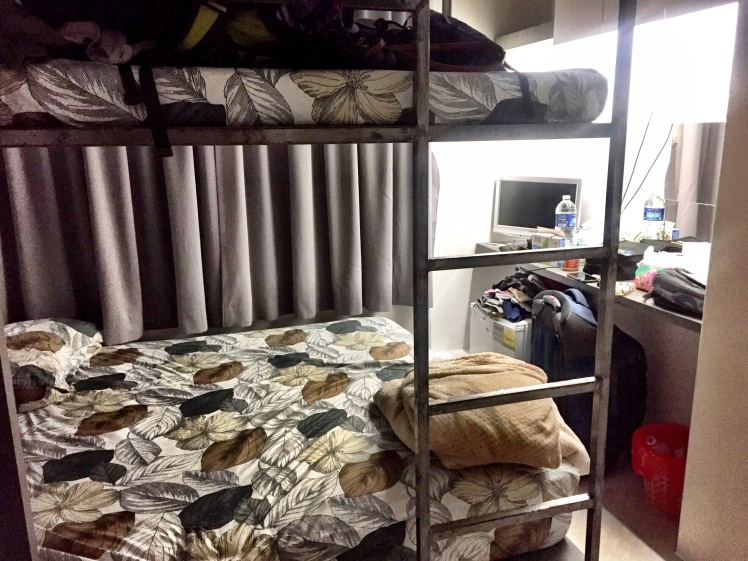 The hostel was actually just fine, if incredibly basic. We had a private room with a comfortable bed, a mini fridge and a television (which we never turned on). The bathroom and shower were down the hall and cleaner than some of the hotels in which we had stayed in other Southeast Asian countries. I’m not kidding when I say this is a clean country. The most litter I saw in Singapore was actually just fallen leaves that had yet to be disposed of.

The room was located on the third floor above a bunch of semi-open air food stalls, but I never smelled the saag paneer and chicken tikka masala. I wouldn’t have minded if I had though. Yum.

Little India is a few miles from the Central Business District and the prime waterfront tourist areas. The nearby subway made it super easy to get around so we bought three day tourist passes for $20 each.

An interesting thing about Little India, which our Uber driver let us know, is that it’s situated in what is known as a Liquor Control Zone, where no alcohol can be consumed in public after 10:30pm or during other specific times like weekends and holidays. He also mentioned something about a recently enacted curfew for the locals due to recent riots by Bangladeshi residents. I could never find any information about recent riots though. And he assured us that foreigners were exempt. Hmmm…

Oddly, the Liquor Control Zones (there are only two) are in what appear to be lower-income neighborhoods in Little India. They came to be after riots in 2013 that were believed to be made worse by public drunkenness. I don’t think I quite like the feeling I get about this law in terms of equity and justice but there you have it. I definitely sensed some underlying biases and prejudices as we explored this diverse but highly segregated society.

Regardless, we certainly never experienced anything at all near a riot or “public disorder.” In fact, the worst I can report was a couple of jaywalkers who may or may not have been us. I’ll never tell.

We loved our time in Little India, Chinatown and the Arab Quarter and relished the differences as we explored each. 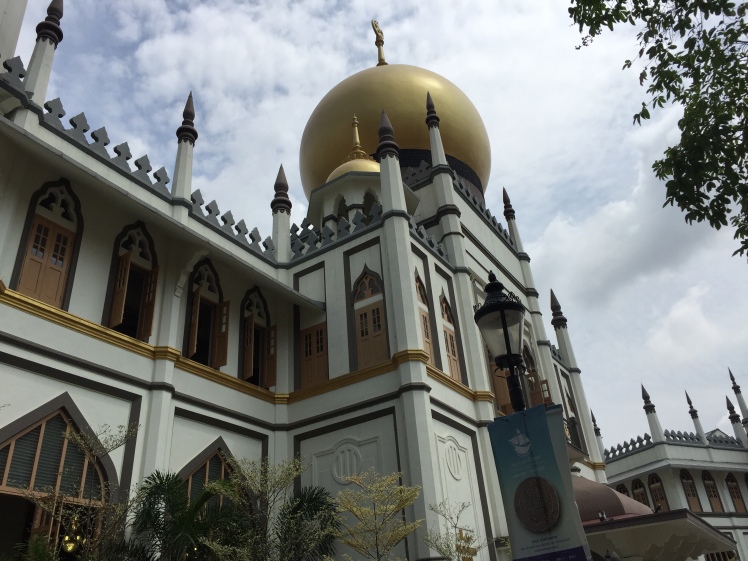 Sultan Mosque and portion of exhibit inside below 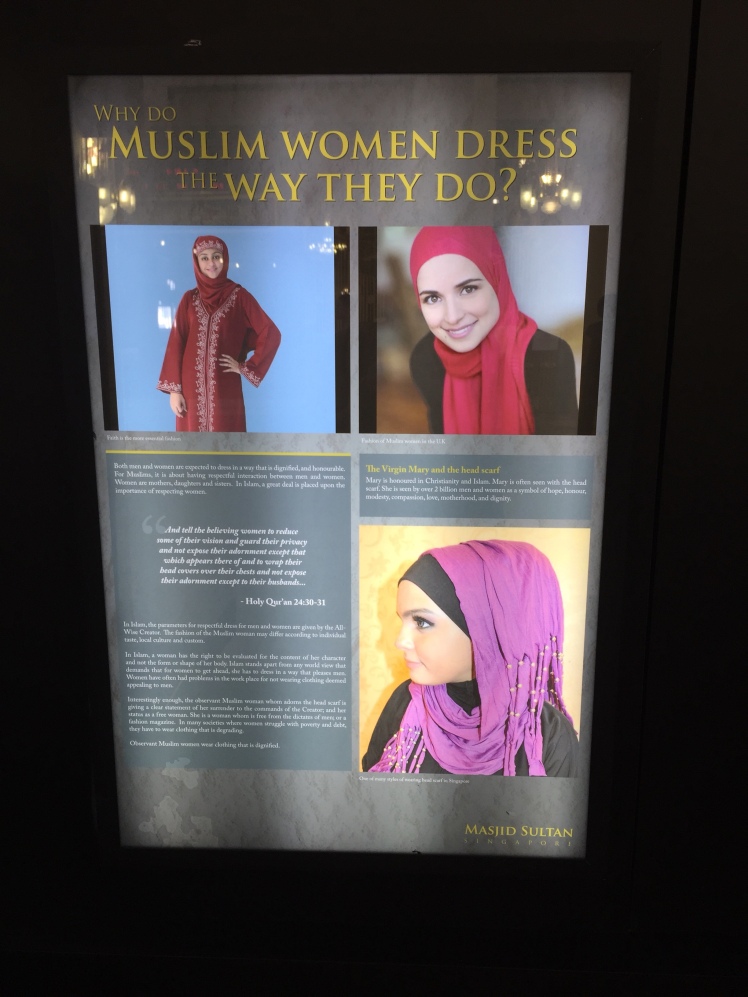 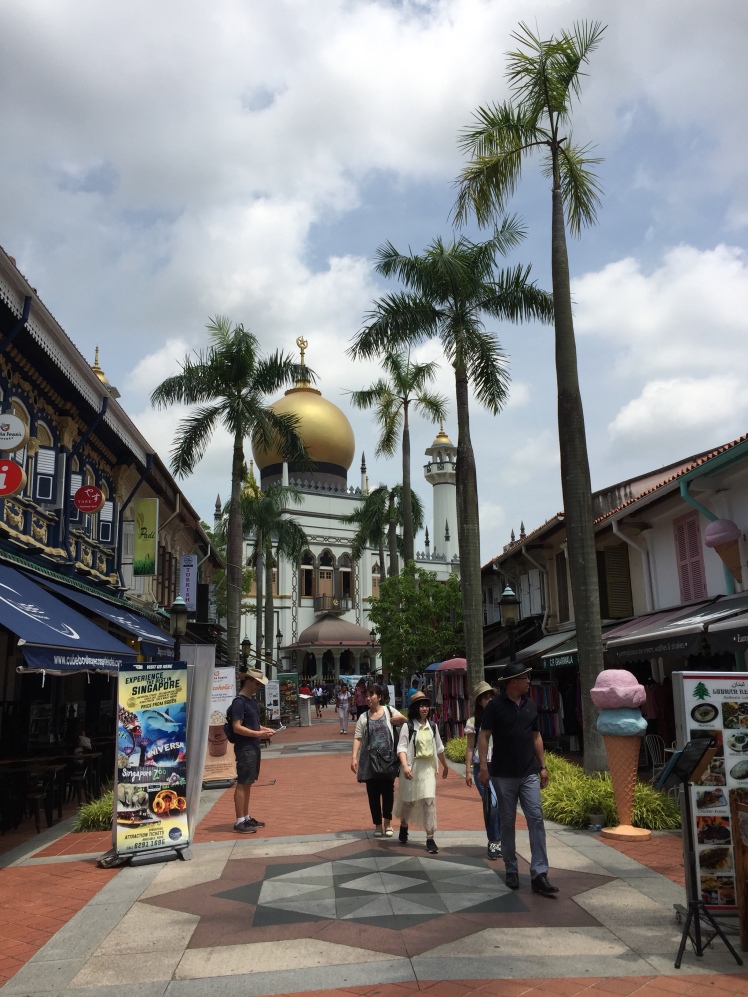 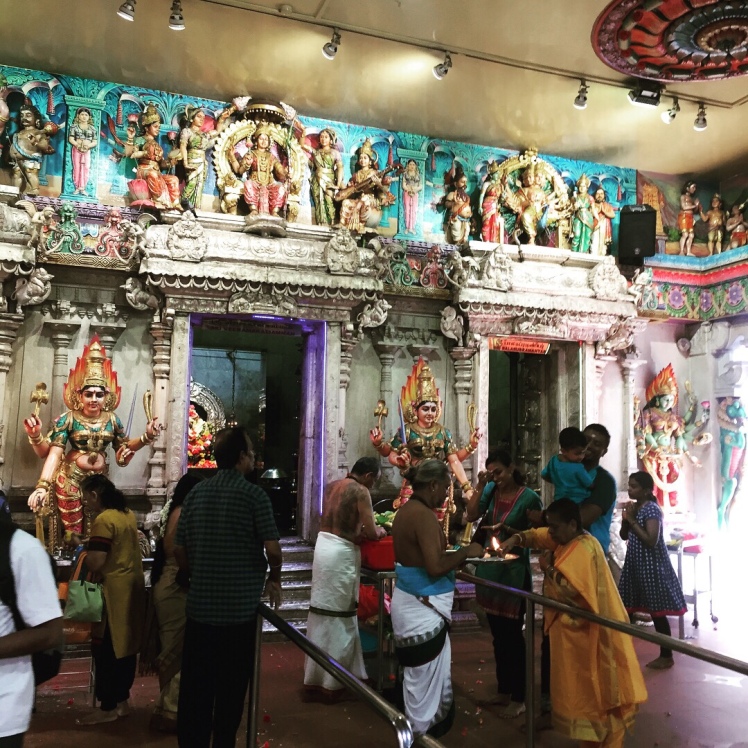 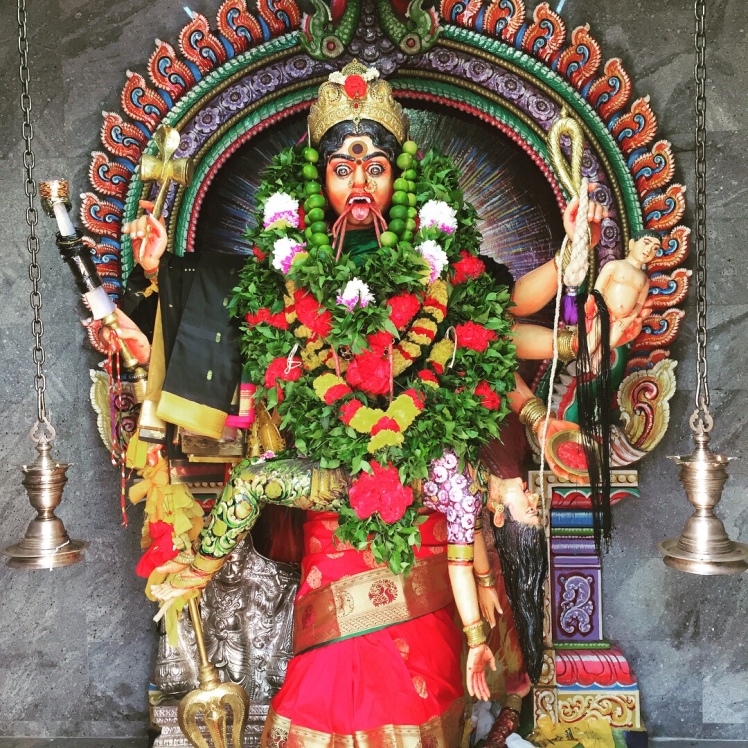 Our sabbatical budget (not including lodging and airfare) is about $60 a day. That includes souvenirs, food, activities, and getting around. Until arriving in Singapore that budget had been more than enough.

Upon looking at my first menu in Singapore, at a little breakfast place across the street from our hostel in the cheap part of town, I almost passed out. A basic omelette was like $20. Forget about a latte. We each settled on a $12 bowl of cereal and then went promptly to the grocery store for bread and peanut butter, yogurt and granola bars. Living on $60 a day as a tourist was going to be a little rough. On the upside, I considered that I might lose some weight.

Luckily, the very wealthy nation of Singapore has made many beautiful attractions available for free. We had four full days here and we spent them wandering the vibrant riverwalk and esplanade areas in the evenings when it was cooler and lolling through the many Botanic Gardens as early in the day as possible. 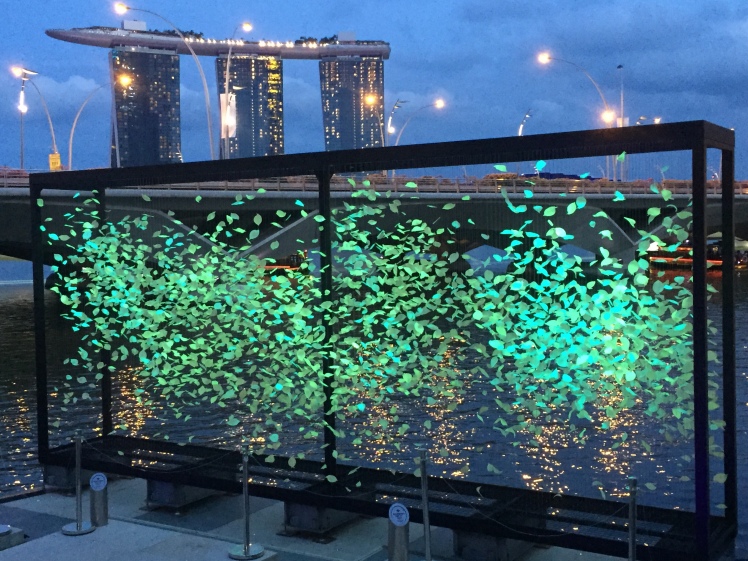 Art displays along the riverwalk 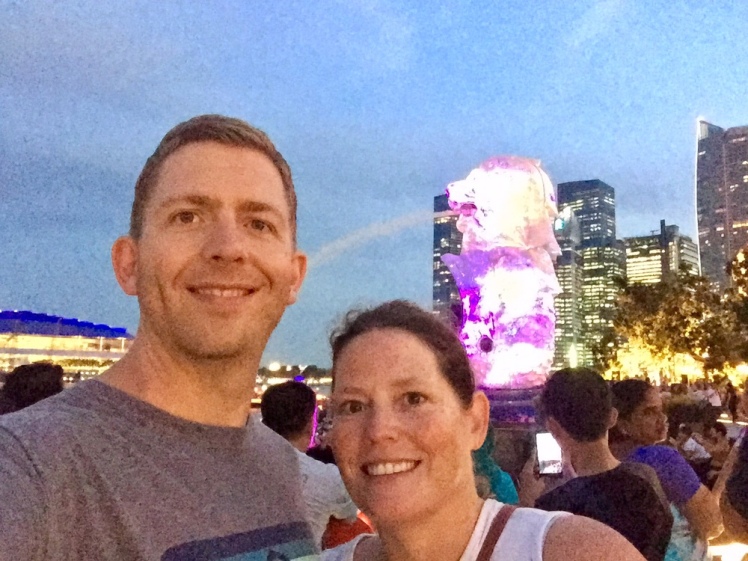 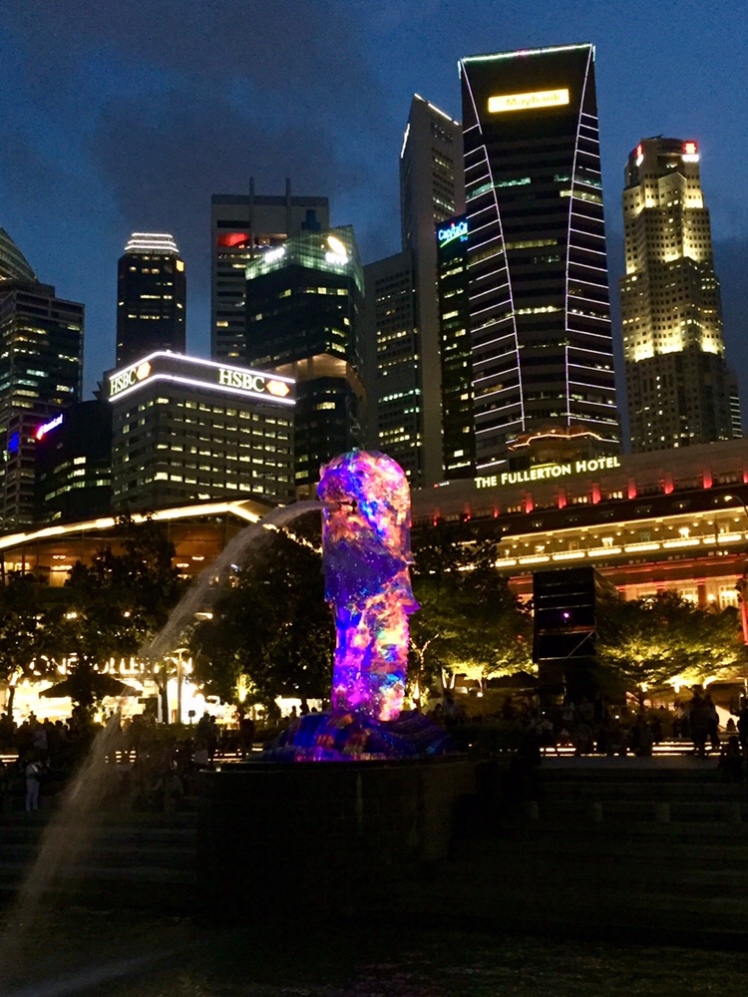 The famous giant Merlion Fountain in the Harbour. There was a special light show installation.

Gardens by the Bay, another free exhibit and light show set to music in the glowing gigantic supertrees.

Can you spot the giant monitor lizard among the roots? 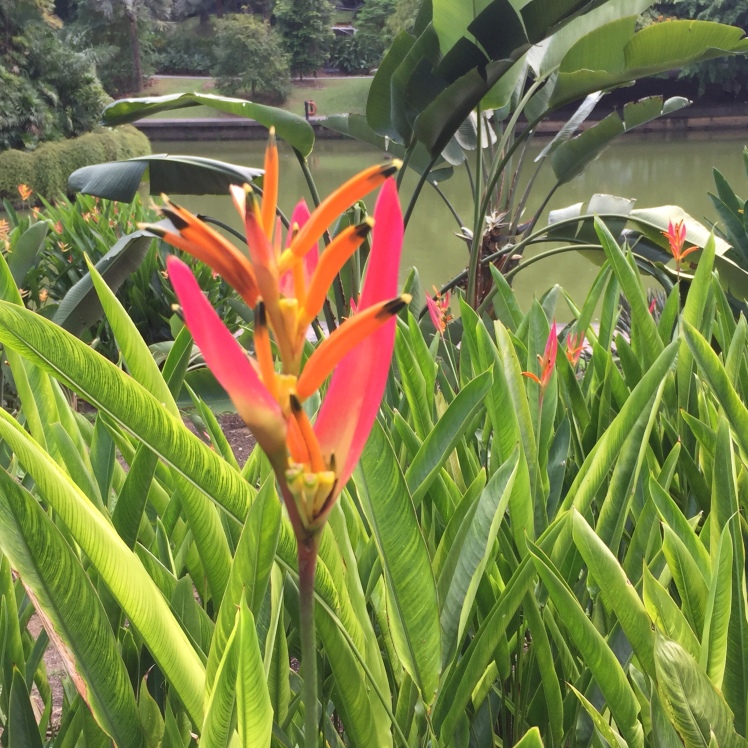 It felt hotter and more humid here than anywhere else we have been. Suffocating. Temperatures hovered around 90 degrees Fahrenheit, but felt like 100. So, we sought out the cool underground malls during the heat of the day (window shopping only). One day we just got on the air conditioned train and rode around to the outskirts of the subway to see what we could see. Basically sprawling apartment complexes, mini Metropolises dotting the suburban landscape. The only houses we ever saw were mansions by the Botanic Gardens. 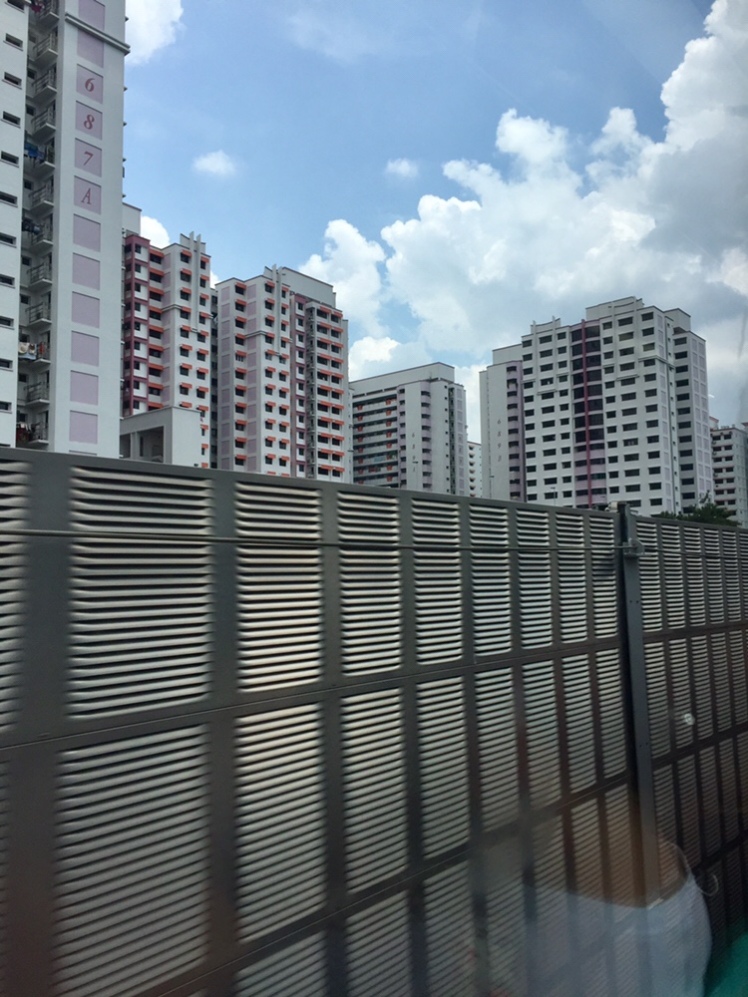 We also spent an evening at a casino, which rivaled any in Vegas. Unfortunately, we didn’t win big. 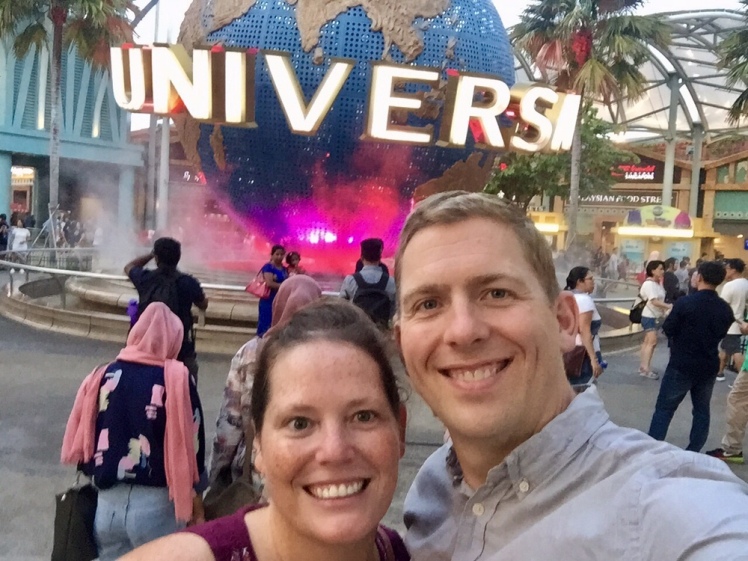 Universal Studios outside the casino, on Sentosa Island. We didn’t go. Alas, not in sabbatical budget.

So far all of my pre-arrival impressions were pretty accurate. Even the ones about the severity of punishments for crime, which I had developed with some healthy skepticism. But I wasn’t going to test the boundaries. At least not intentionally. Standing in line for the subway one day, I was hungry, so without thinking I pulled out a granola bar and started chomping away. Two bites in, I nearly choked when I realized what I was doing. Luckily, I wasn’t apprehended and fined S$500 (US$380), but Trent knows people who have been.

At the grocery store, there were signs everywhere warning shoppers not to shoplift or they would be put in jail. They even zip tied our grocery bags so that we couldn’t stuff anything in after we checked out. No room for error here. And it works. Singapore is a very orderly, clean, and safe place. By the by, I also saw that sign warning drug traffickers of their fateful end should they be caught.

Bottom line, Singapore was well worth the investment of time and money. It was more expensive than I had anticipated for sure. My combo meal at Subway sandwich shop was $9, and our splurge meal that cost $66 consisted of two tablespoons of hummus, four pita strips, one medium sized piece of brisket, and a pickle. We shared and left still feeling a bit hungry.

But the beauty of the city and the thrill of seeing yet another side to Southeast Asia made up for it. As usual, the people were respectful, if a little more hurried and harried than other places we had been recently. I enjoyed the multicultural aspect the most, and I plan to learn more about this version of a melting pot and how it’s the same and different than our own. 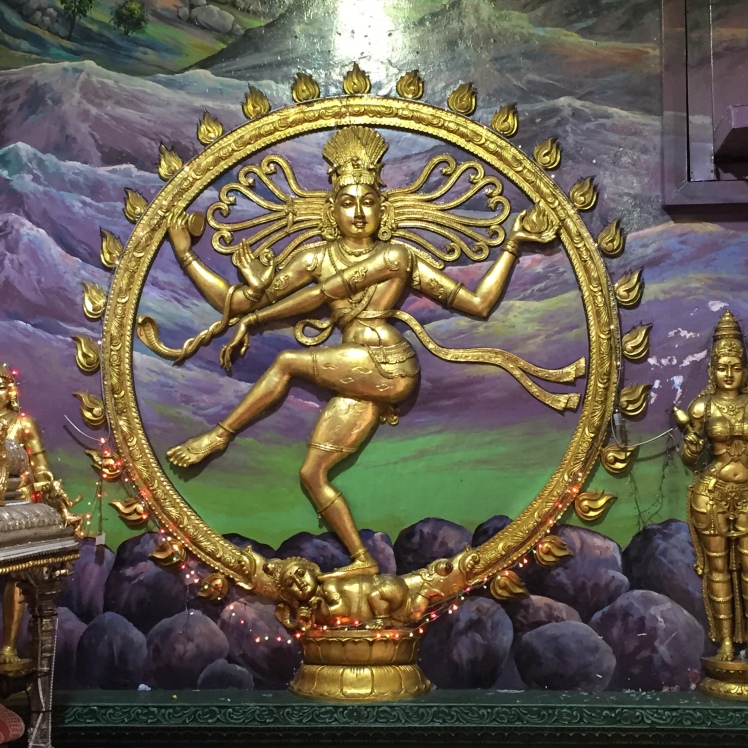 Wall mural and relief in Hindu temple in Little India 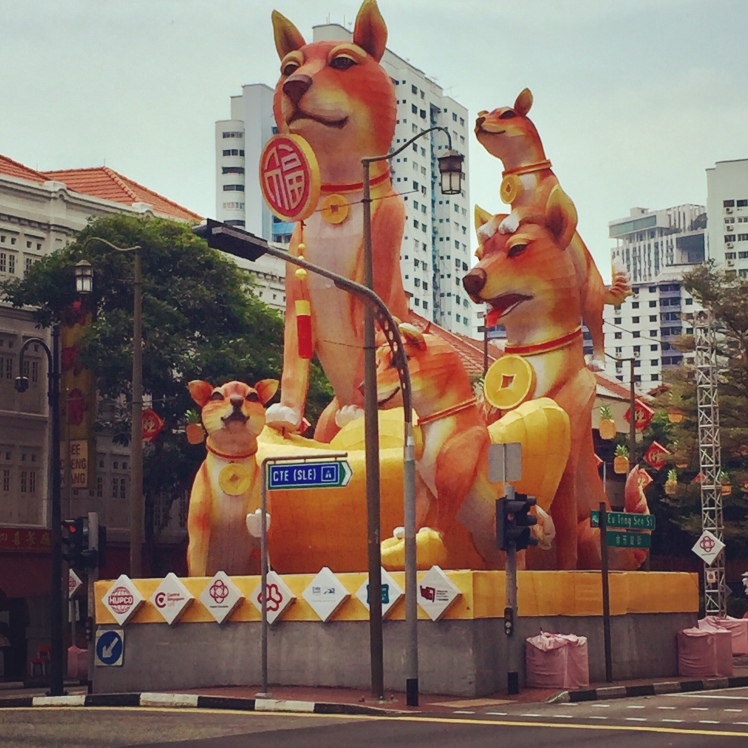 Year of the Dog in Chinatown

I do hope we can return some day on a slightly infused budget to do some of the pricier activities like the Night Safari, the boat tours, museums, and some of the other paid attractions.

Until then, we say goodbye!

3 thoughts on “Singapore, you captured my imagination. And my wallet.”