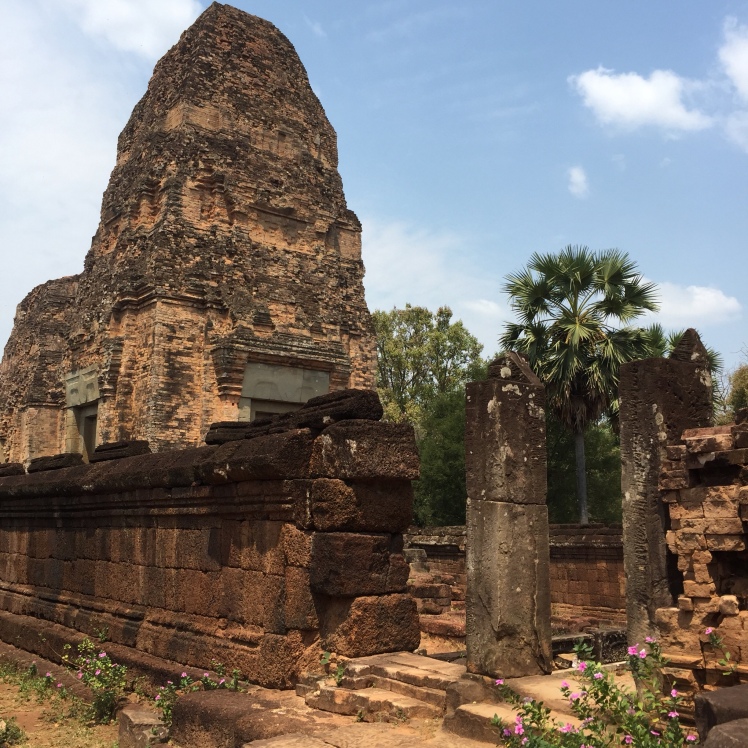 But when we weren’t playing amateur archaeologists, we were spending our brief time in Siem Reap getting to know the Khmer culture and the people who live here.

We spent our first day in Siem Reap exploring the downtown area by tuk tuk. Our driver, Mr. Lay, first took us to Pub Street for lunch and to wander the shops and markets. That was nice, but most of the things we saw in the market were the same items we had seen in Thailand.

Side note: I was perplexed to see that all of the prices were in US dollars, and everyone accepted them. Turns out it’s basically the unofficial currency of Cambodia. The official one is the riel. We were all thrilled to see that we could get a Cambodian beer for fifty cents and a massage for $1/30 minutes. 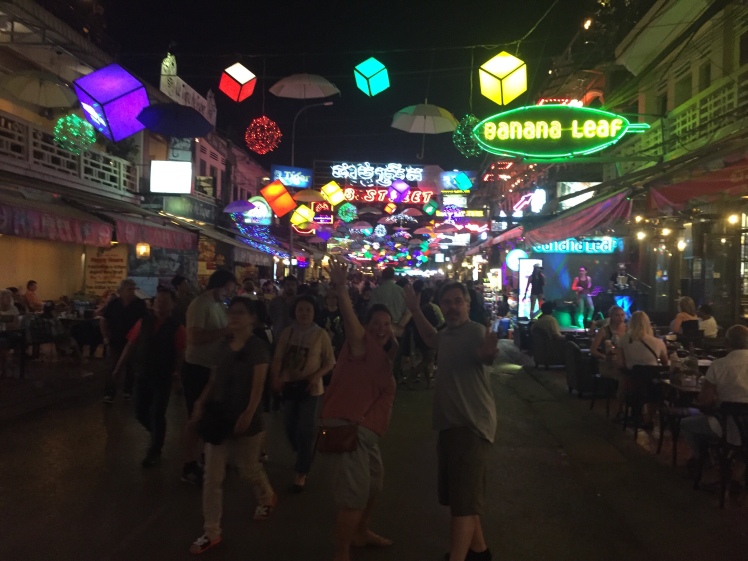 Pub Street at night, the lively heart of the tourist area of Siem Reap

But I digress, below are our top three cultural experiences aside from the temples themselves. For more on our tour of the temples, click here.

After some crocodile Amok curry, we hopped back in the tuk tuk, and our driver took us from Pub Street to a place called Angkor Artisans. We were immediately greeted by a young guide who asked us if we wanted a free tour of the workshops.

Our guide, Mien, explained to us how the organization was first founded in the early 90s to provide training to Cambodian youth in an effort to provide them skills to earn a living and also to preserve the handicrafts and artistry of the Khmer people. Mien himself had been a student and learned woodworking before being hired by the organization as a guide. The organization employs more than 1,000 young Cambodians. 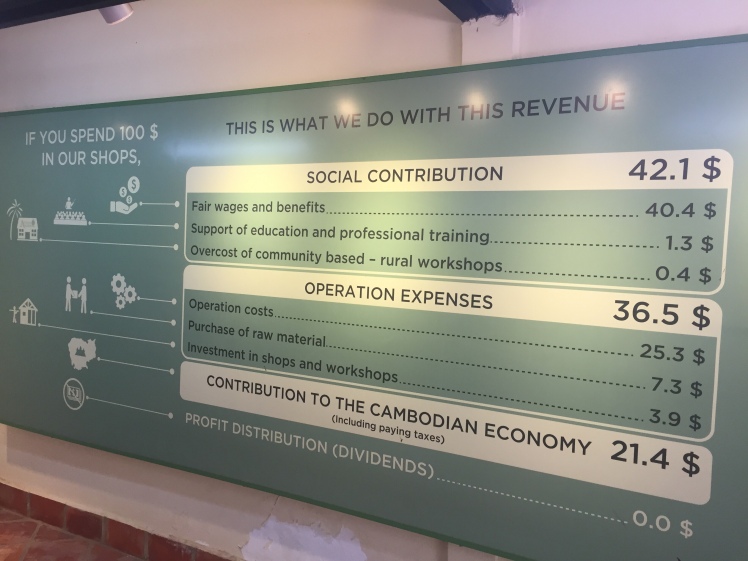 They train youth age 18-25 in various arts, including stonework, woodcarving, lacquerware, and oil painting. Watching the craftspeople gave me a profound appreciation for the work that goes into the production of the souvenirs and decorative items we take for granted. One small Buddha carving may take five to seven days to complete. I’ll be thinking about that next time I consider haggling over a few dollars in the market. Especially now that I know that the median daily income for a Cambodian household is only about $3 or less than $100 a month. 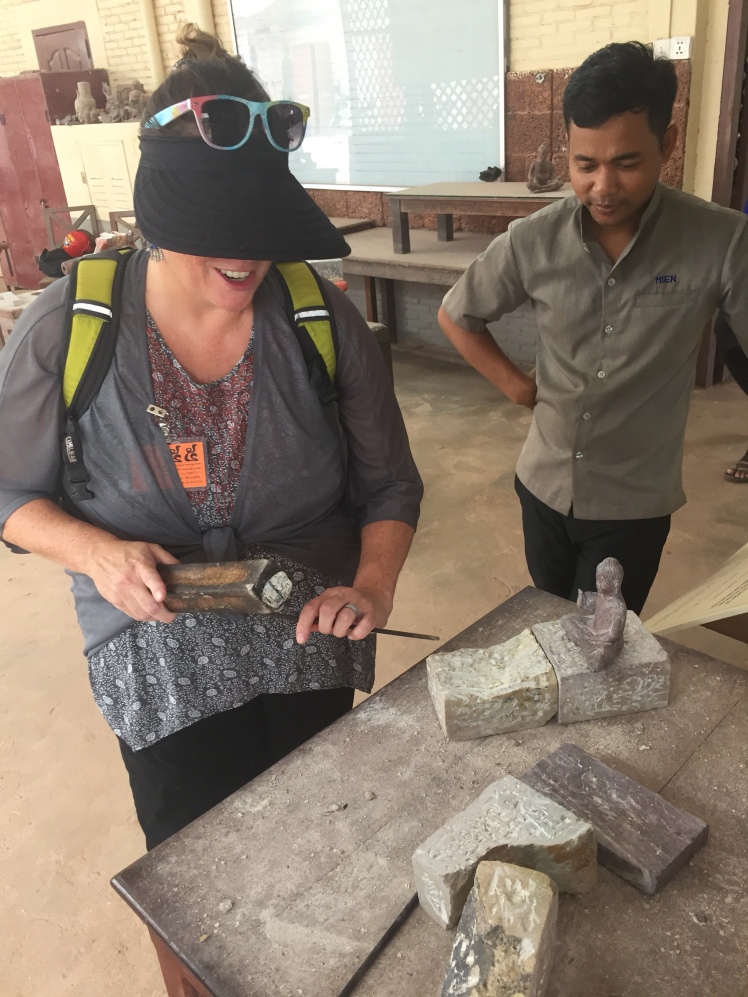 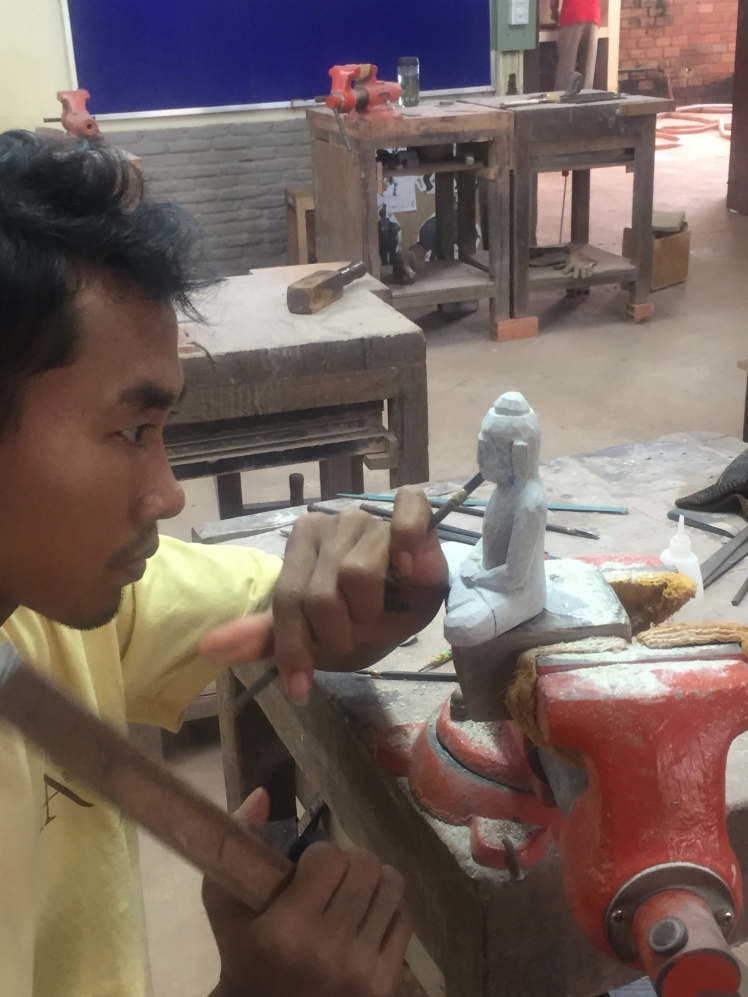 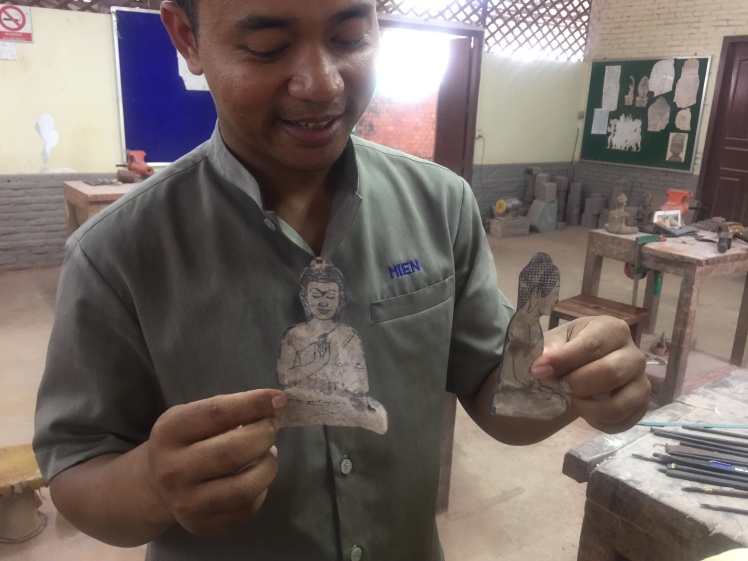 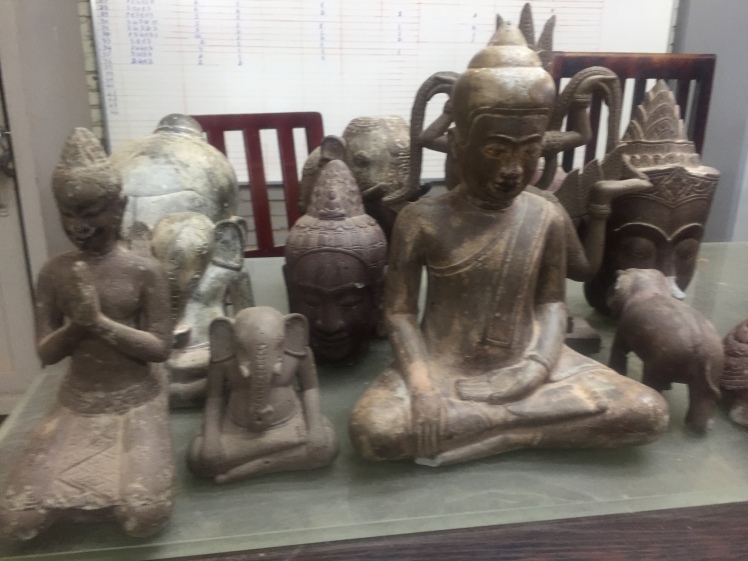 After years of government subsidies, Angkor Artisans is now self-sustaining and making a difference in the lives of thousands of Cambodian young people and their families every year. They gave beautiful shops all around the region, including the one pictured above.

After visiting the temples, I am in awe of how many people and how many hours it must have taken (in the sweltering heat no less) to painstakingly carve the thousands of bas reliefs and Buddha statues and columns that decorate every surface. Humans are remarkable, and I definitely recommend Artisans Angkor as a stop on your travels through Siem Reap.

Considering we have been living on our no-income sabbatical budget for nearly a year, it’s been a while since we have splurged on any kind of a live professional performance. But watching performances on stage is a passion for me so we bought tickets to Cambodia’s number one rated performing arts circus (think Cirque du Soleil) for $18.

The biggest draw for me was that the troupe was founded as an educational enterprise by poverty-stricken Cambodian youth seeking to improve their lives through the arts. The program has graduated hundreds of students, changing their lives and their families’ lives forever.

We were not disappointed. Again. The opening scene of the show, entitled “Influence,” brought me near tears as I was mesmerized watching six actors, using only bamboo mats as props, tell a story of survival and isolation without uttering a word. I think you had to be there. Trust me. It was beautiful.

And there were plenty of death-defying acrobatic interludes. These circus performers were true actors as well as contortionists, dancers and stunt people. Very impressive. 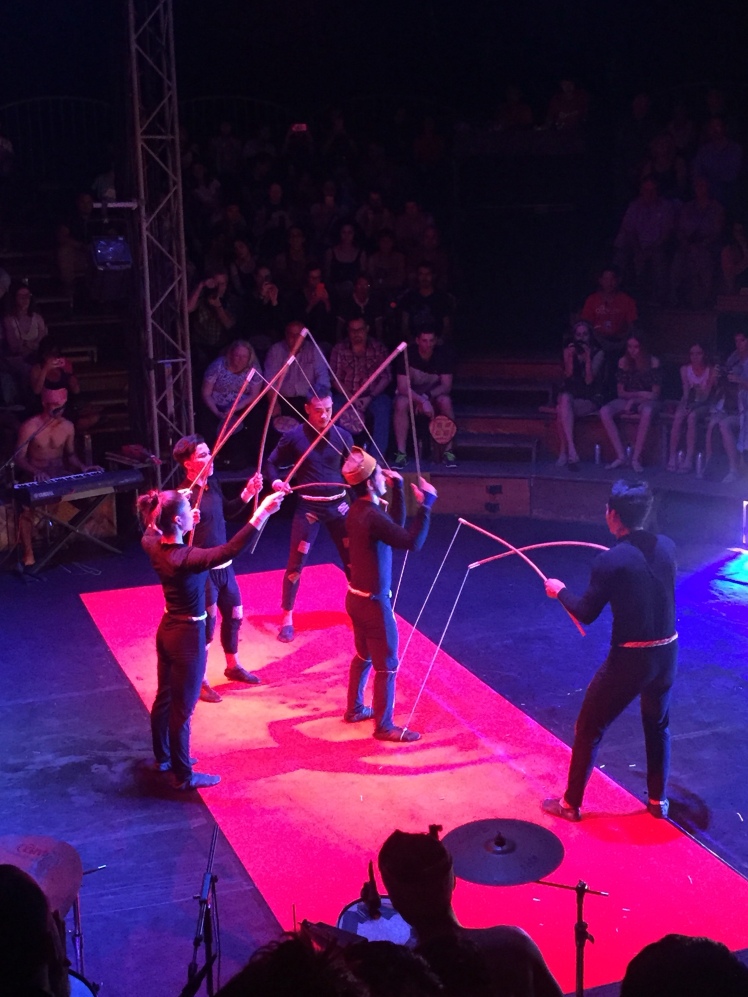 They told the story, in perfect clarity, of the struggle to survive, the power of influence and corruption, and the resilience of the human spirit in a language that everyone in the multicultural audience understood. Without speaking one word. I wanted more after the 60 minutes was over.

We probably should have visited the Angkor National Museum before we visited the temples. We certainly would have had a better understanding of the history of Cambodia, the Angkor region, the main temples, and the Khmer people if we had.

We weren’t allowed to take pictures inside the exhibit galleries, but we definitely considered this visit to be educational and inspiring and worth the $12 admission fee. 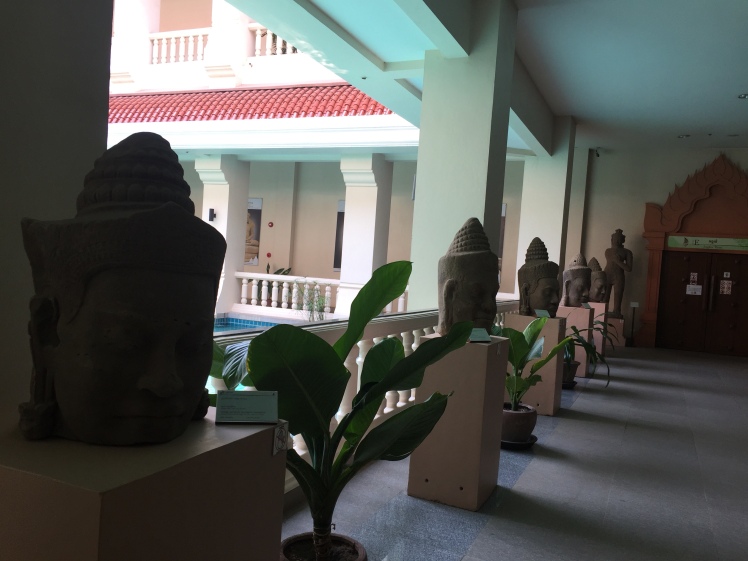 If you can only do three things other than temples while you are in Siem Reap, these three would not disappoint you. 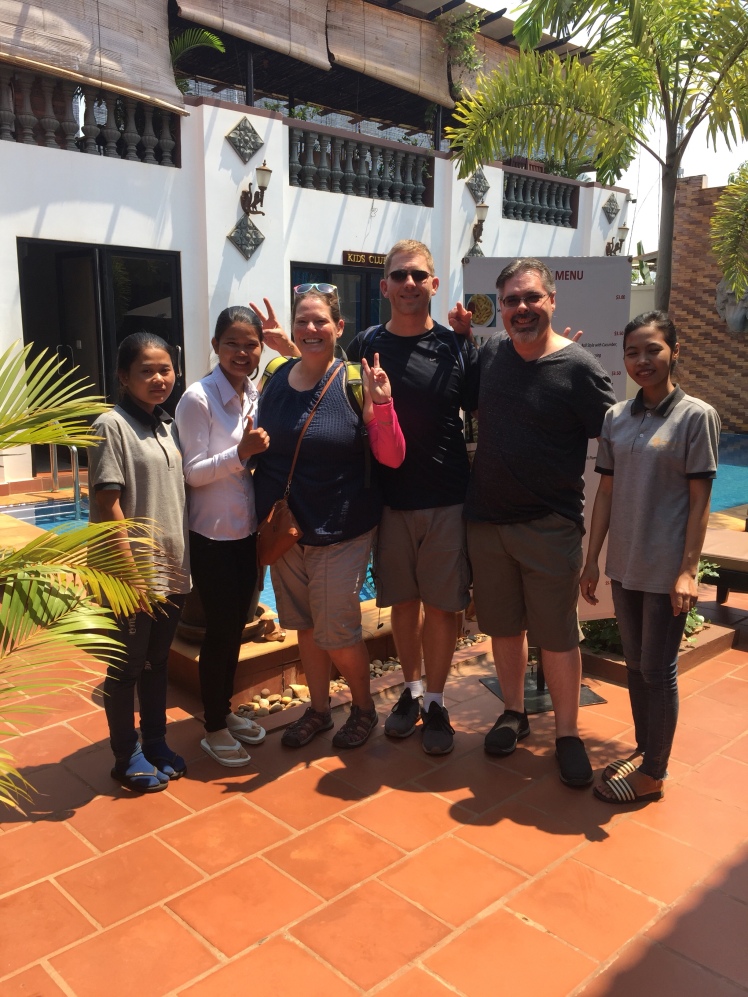 Our hosts, Chhiya and team, at The Kralahn Petit Villa in Siem Reap

Our tuk tuk drivers, Mr. Lay on the left and Mr. Seng on the right.

Join 757 other followers
Follow The Found Year on WordPress.com