Chiang Rai is the northernmost “big” city in Thailand, up near the border with Laos and Burma (aka Myanmar). The population is around 200K. It is a beautiful mountainous area, flanked by rivers and home to people from many cultures, including ethnic hill tribes. 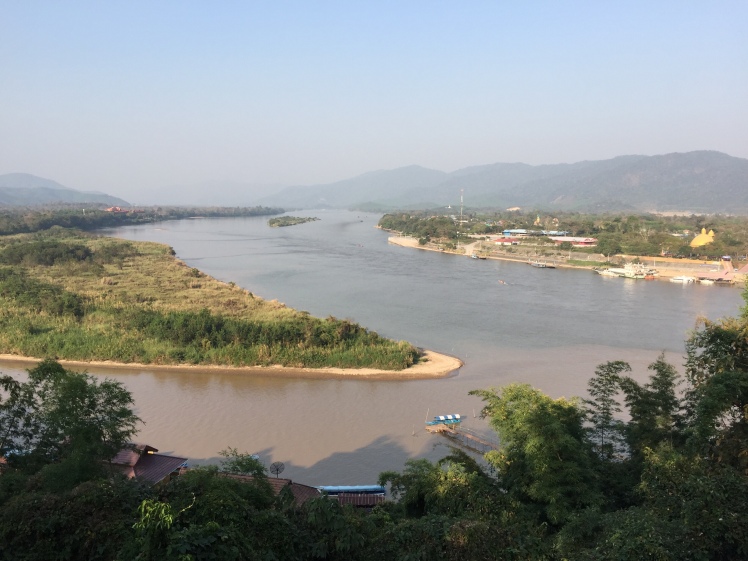 Thailand in the foreground, Myanmar in the center, Laos on the right. Mekong and Ruak rivers converge at the Golden Triangle

Trent took a day trip to Chiang Rai from Chiang Mai back in December, but I missed it because I was sick. So we planned a little return because there are a number of interesting sites to see, particularly the blue and white temples. Also, we needed to do a quick visa run across the border to Burma because our Thai visa was expiring.

Although Chiang Rai is north of Pai, where we had been lounging for a few days, we still had to travel south back to Chiang Mai three hours and change buses to then head north five more hours to Chiang Rai. There is no direct route from Pai because a big mountain stands in the way. I said I wanted a long day of travel to see the countryside and I sure got it. 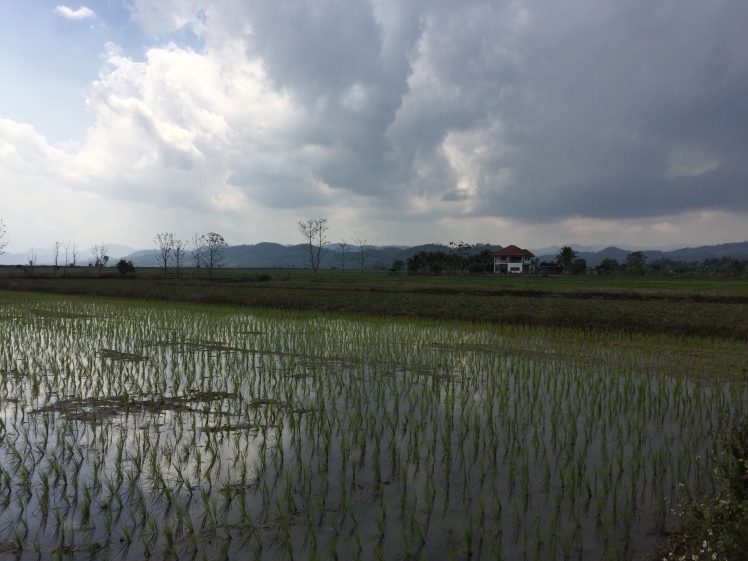 Rice paddies on the way to Chiang Rai

After a very long travel day (we boarded a minibus in Pai at 6:45am), we were dropped off in the center of Chiang Rai at a gravel lot (aka the bus depot) around 3pm. We lugged our bags a few blocks until we found a taxi. After showing him the address of our lodging, he drove and drove and drove until he started winding up the mountain. Trent looks at me and says, “where exactly is our hotel?”

I always book our lodging, but it had been so long that I couldn’t remember where exactly we were staying. So we just shrugged and went along for the ride. That happens a lot. It’s a good life lesson because most of the times things work out better than we could have planned.

After about 40 minutes, the taxi finally pulled in to the Bura Resort. As soon as I saw it, I remembered booking this beautiful getaway. This little resort with 8 cottages nestled in the hills and landscapes with dozens of waterfalls was to be a slow-paced alternative where we could just chill out or launch to a tour of sites all around the Chiang Rai province, which is exactly what we did.

Our little cottage (picture 1) and on the deck by the outdoor dining area (picture 2) at Bura Resort, Chiang Rai

Since we didn’t have any transportation, our kind host, Jazz (he used to be a kindergarten teacher and a mushroom farmer in Bangkok but traded it all for the slower pace of a resort owner), offered to drive us to the nearby hot springs for a day of relaxation.

The blue spout was the “cold” water (aka not hot enough to actually kill you) and the green was the burning hot singing set you on fire water.

The free pools outside the hot springs facility

The following day we hired a driver for 2,000 baht ($60) to take us around to all the sites we wanted to see and for that visa run to Burma. It was more expensive than renting a car ourselves but so much easier to have a local who knows where to go and how to deal with parking and maneuvering the car while we enjoyed the sites. We started with the well-known white and blue temples.

The White Temple is more a work of art than a religious site. The complex was designed and built in the last ten years by a renowned Thai artist to specifically combine modern and ancient cultural symbols to depict the journey from ignorance and distraction to enlightenment. It was fascinating and stunningly beautiful. 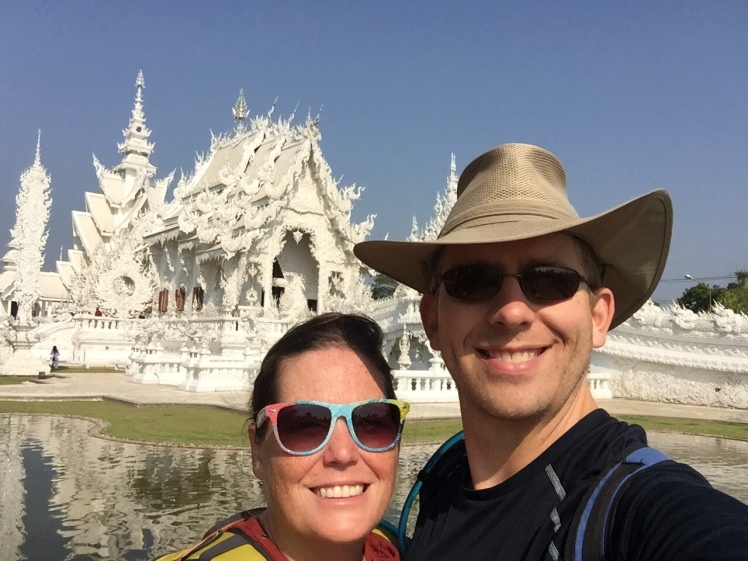 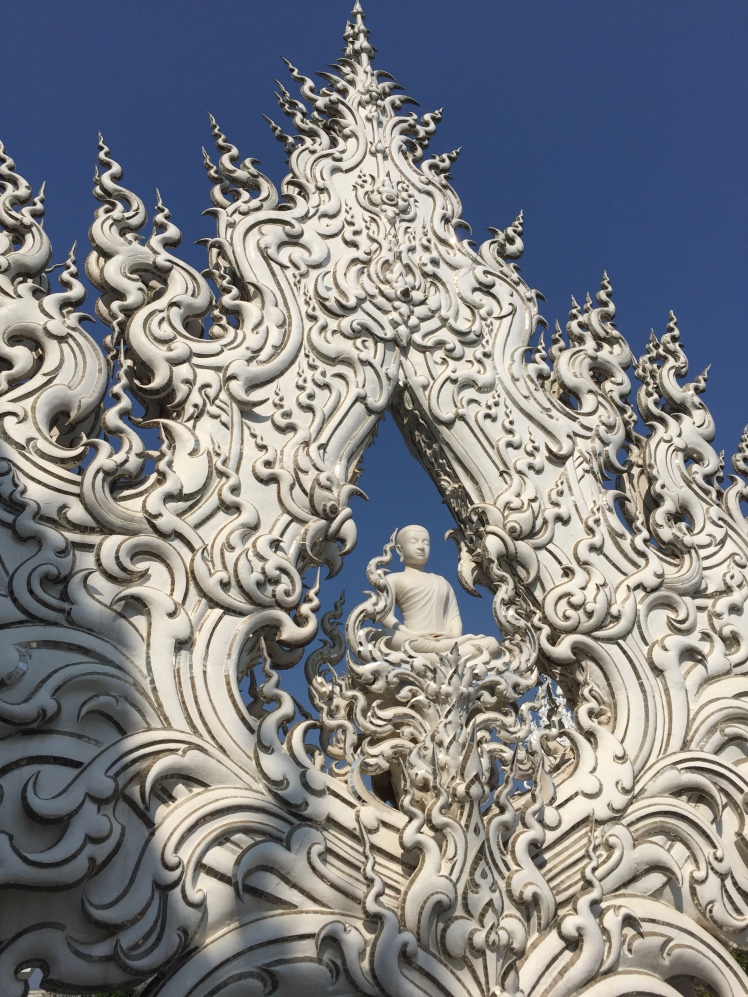 The Blue Temple is being built by a group of artists who helped to design and build the White Temple and have a goal of making Chiang Rai the Angkor Wat of Thailand, known for many beautiful temples.

We made a brief stop for Thai tea and coconut cake at a tea plantation. There were some beautiful views. 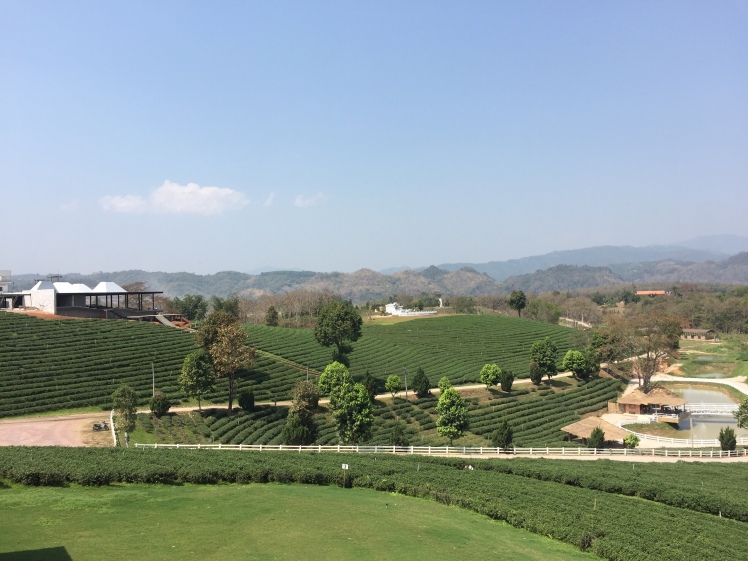 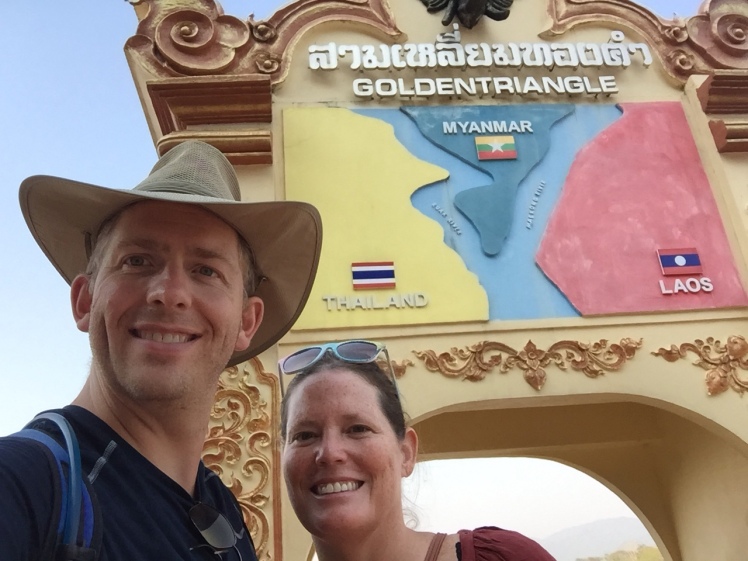 This is the area where we walked across the border from Thailand to Myanmar. That was an experience in itself. We got in a long line of locals and then wound our way through the border crossing to the area for foreigners (I love being known as the foreigner here). There we paid in US currency $10 each to obtain a visa to Burma for the day. It was about $5 cheaper than if we had paid in baht. We thank our driver for that tip. 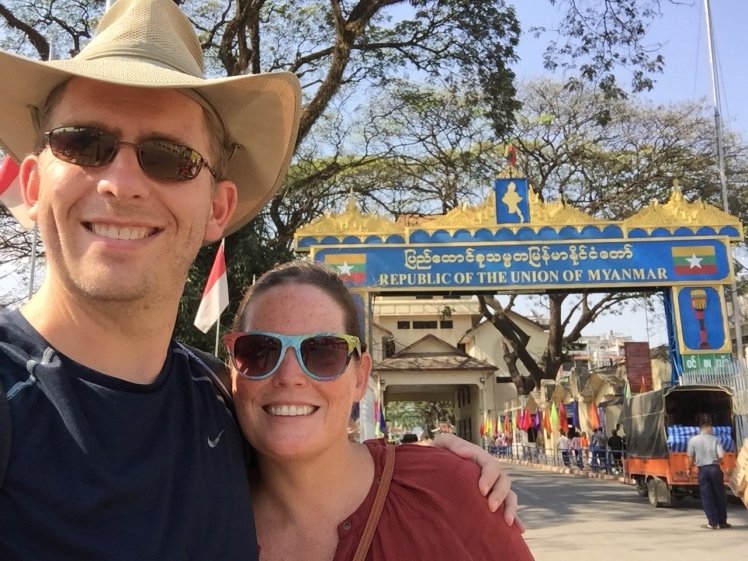 Then we wandered into the streets of Burma, the only caucasians to be seen. Trent always gets lots of looks as the tall blonde light skinned guy and this was no different. The markets below street level were brimming with people even on a weekday afternoon, and everyone wanted to sell us something.

After a little window shopping we began making our way back to the border where we had to take back our passports. We had to leave them with the border police when we crossed over, which made me pretty anxious to be honest. I was glad to get them back and walk back into Thailand which feels a lot like home these days.

After a 10 hour day of sightseeing, we decided to spend our last day in Chiang Rai simply lounging on the deck by our cottage. It was perfect. We read. We fed the fish. We played with the resort dog, Wan. We laid in the sun. One of our hosts knew we loved the northern Thai curry soup called Khao Soi, so she surprised us with a bowl of the soup for lunch. The people here are so kind and generous. 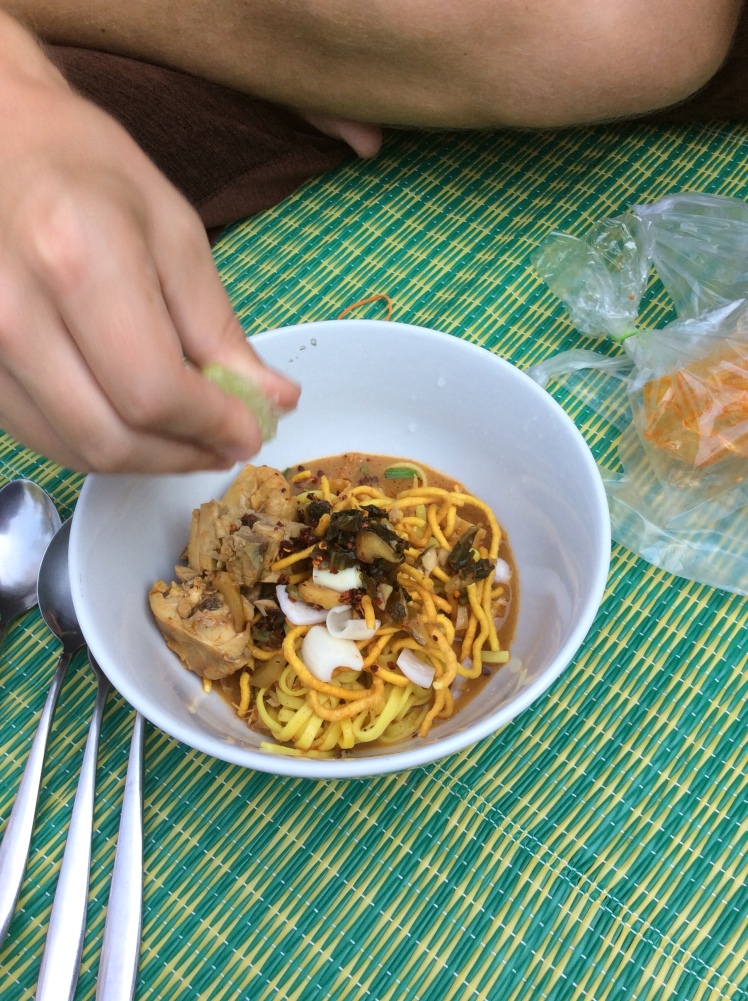 This last day dragged on and on in the most wonderfully relaxing way and made me long not just for a fish pond and waterfall back home in Denver, but also for a way to preserve the easy peace of mind that comes with escaping into nature.

Next stops: Bangkok, where we will meet up with a friend from Denver for a few weeks and then travel to Ao Ng beach in Krabi and Siem Reap, Cambodia.