Oh, Hanoi. I wanted to love you unquestioningly like I do almost every big, crazy, smelly city I’ve ever been to. But, alas, some love stories just aren’t meant to be. Perhaps we can still be friends. 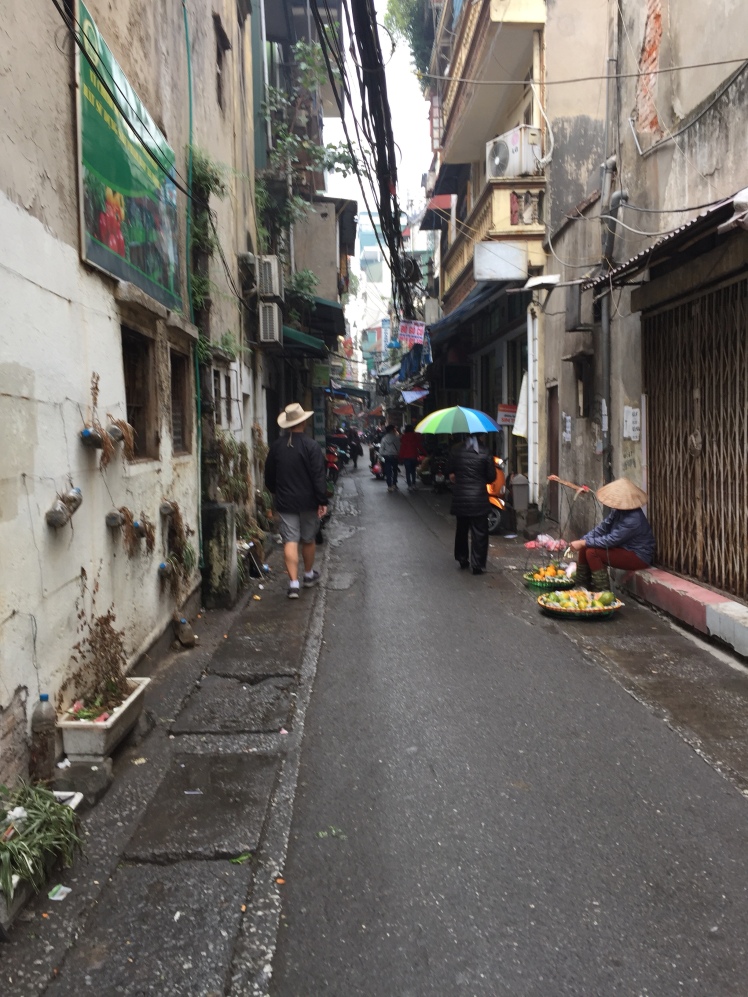 The signs were good at the start. The young woman sitting next to us on the plane from Chiang Mai, Lien, offered for her boyfriend to drive us into the city from the airport. She even called and paid for an Uber to take us the rest of the way to our homestay. 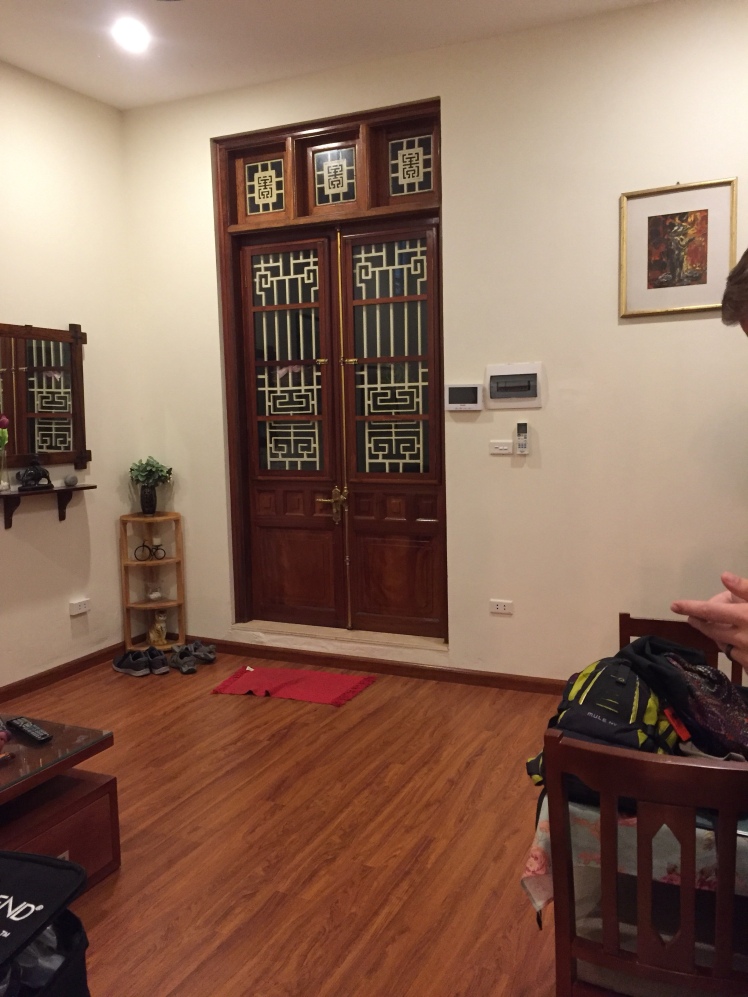 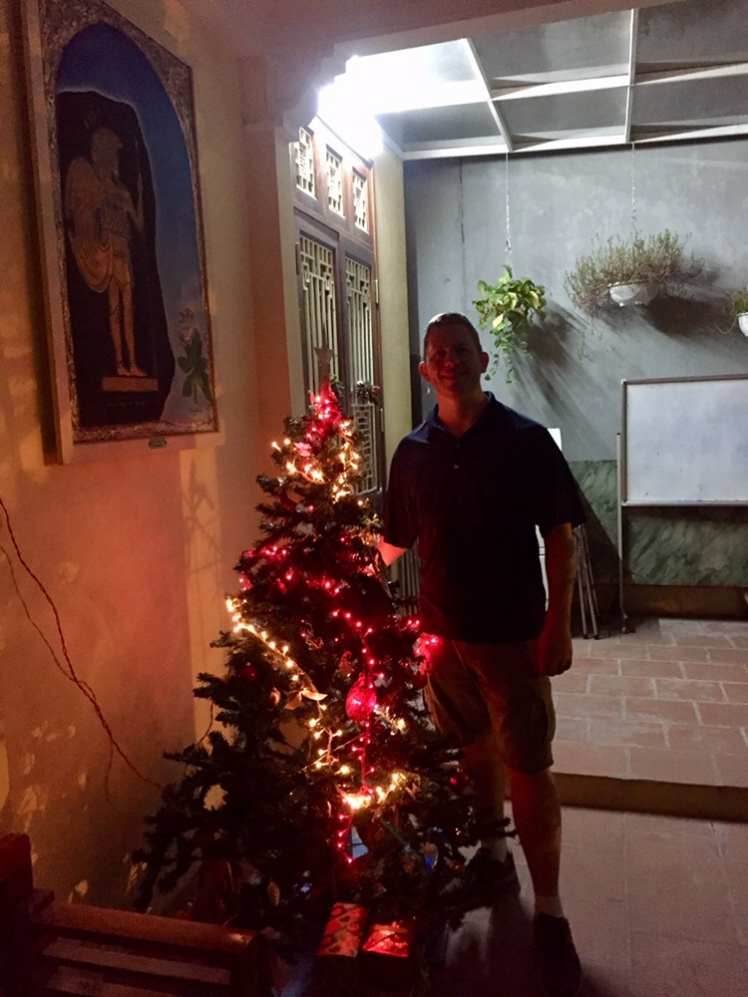 A Christmas tree welcomed us to our little Vietnamese apartment 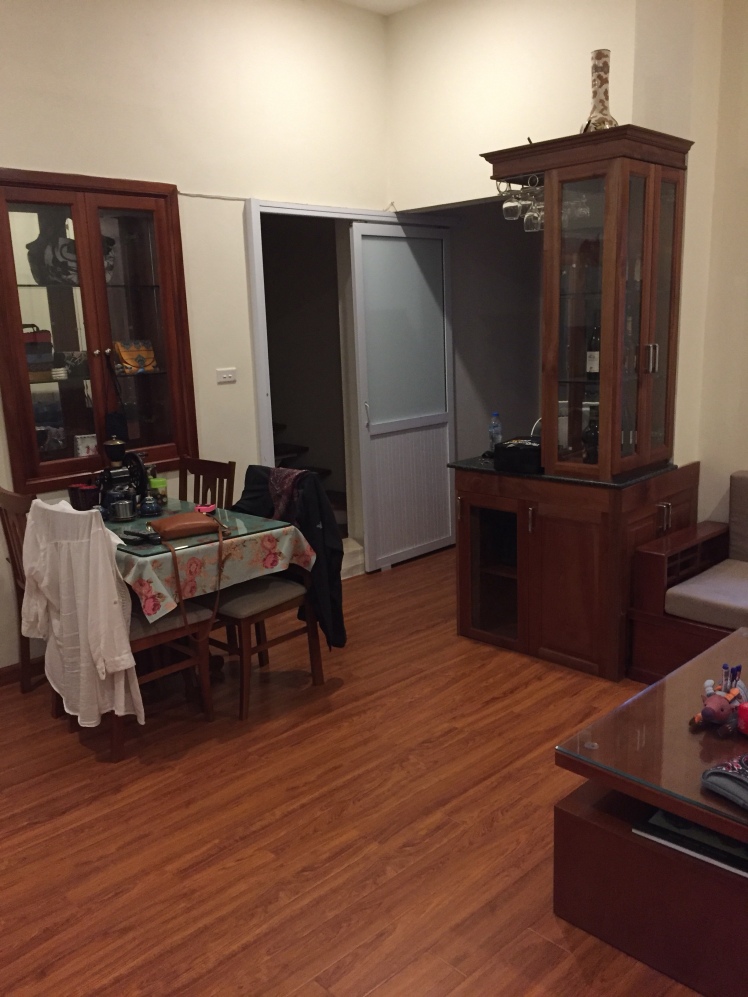 I thought that if Hanoi was as kind and welcoming as its people, we were going to love it. 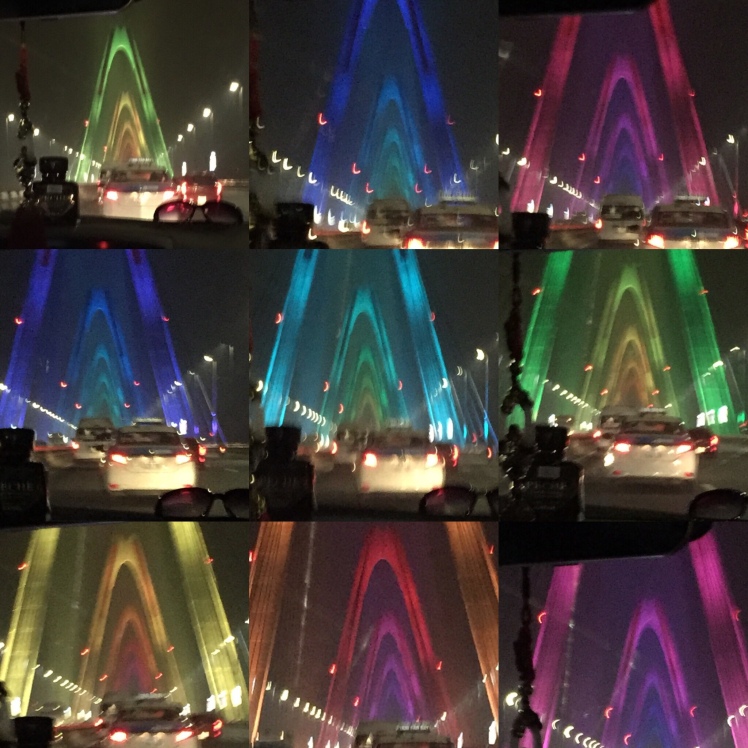 The bridge from the airport to Hanoi

From such an auspicious start the tumble down the rabbit hole began. It didn’t help that I had a wicked headache and Trent and I were tired after a long day’s journey from Chiang Mai to Hanoi, with an exhausting 9 hour layover in Bangkok. It might have helped if I had done my research and knew a little bit more before we arrived. But I’m not sure anything could have prepared me.

Hanoi is overwhelming. Every city with millions of people is an assault to your senses in one way or another. In Chiang Mai it was the smells that assaulted me at every turn. I could handle that because, like Bertie Bott’s Every Flavour Beans (lots of Harry Potter watching lately), every now and again you got a good one. Sweet Jasmine following the acrid smell of exhaust. Musky incense disguising the sour body odors.

We were so happy/lucky when we crossed this intersection in tact.

In Hanoi it was a much more physical assault, a very real danger of losing a limb crossing the street or losing an eardrum to the incessant whining and beep beeping of motorbikes. In Thailand-no honking. In Vietnam-it is the national pastime. I’m working on getting used to it. Sometimes while we are riding bikes I say “beep beep” to Trent just to get in on the action. Surprisingly that helps. 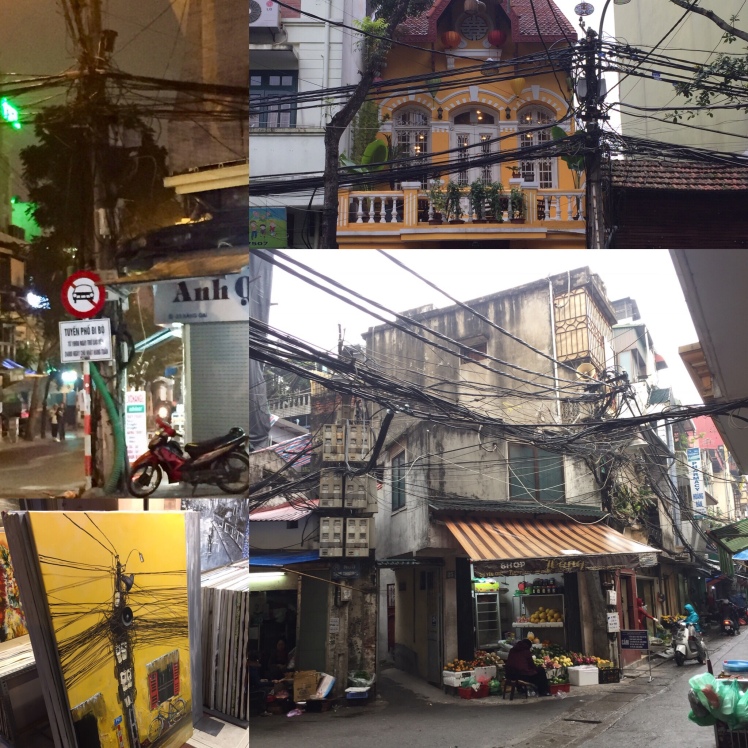 I call them Hanoi trees, and clearly the artist was enthralled by them too

I’m sure that there are some beautiful views in Hanoi, but I didn’t get to appreciate them in the moment. Maybe it was the oppressive gray skies. Maybe it was the need for constant focused vigilance to avoid certain death by motorbike, or maybe it was all the cables hanging like electric cobwebs just waiting to ensnare or electrocute me, but Hanoi grated on my last nerve and pushed me to edges I didn’t know I had when it comes to travel. Maybe that’s a good thing, but I still couldn’t wait to move on (or get the pho, pronounced fuh, outta there). 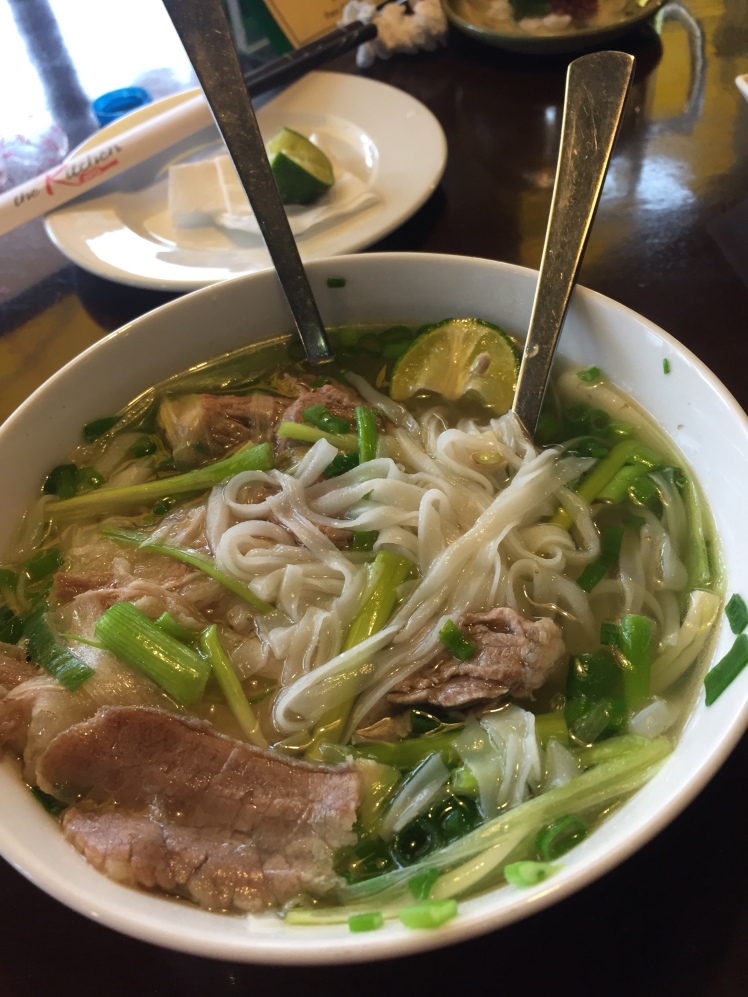 My first pho of many

It’s only after leaving that I can look back with space to breathe and time to let my guard down and really appreciate the city. I think life is like that sometimes. 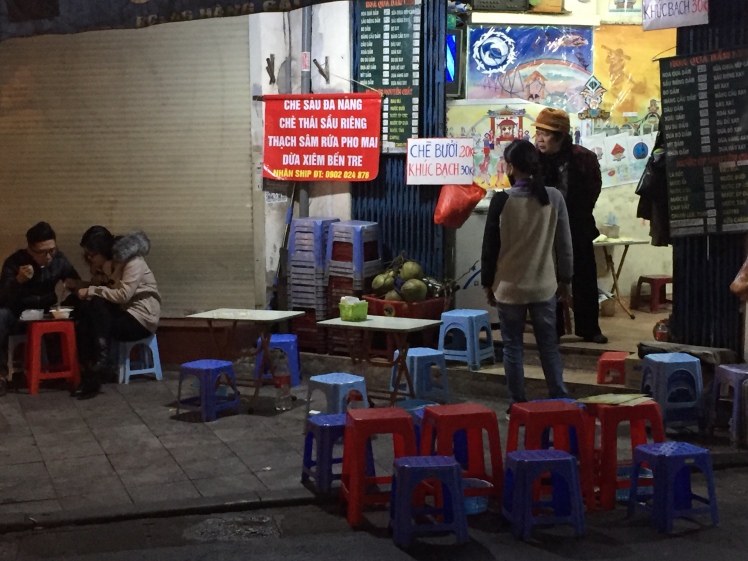 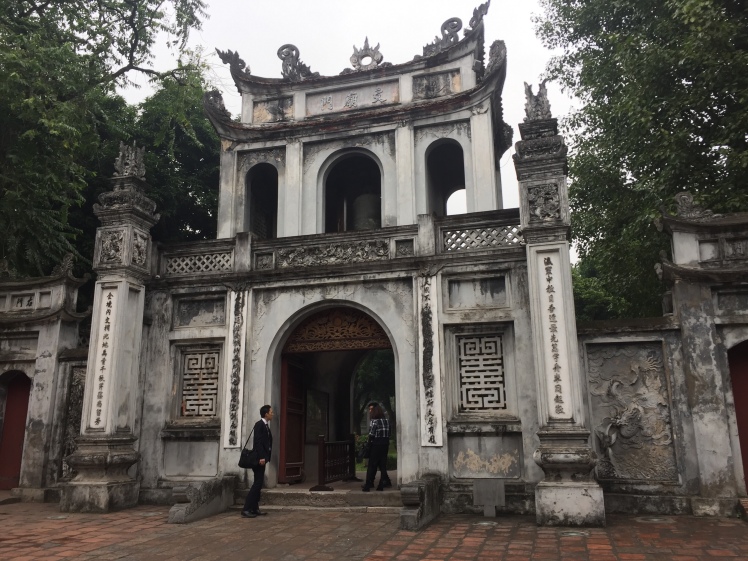 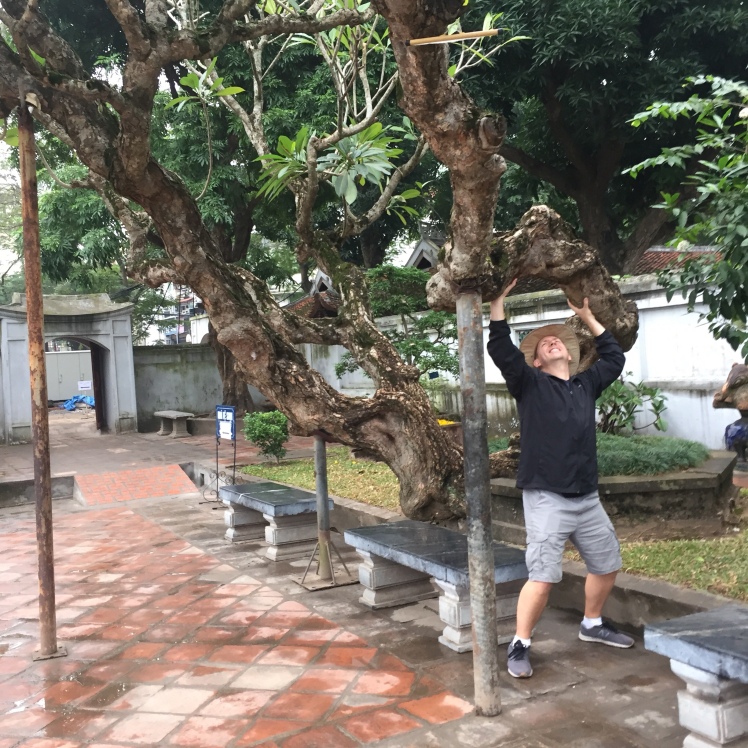 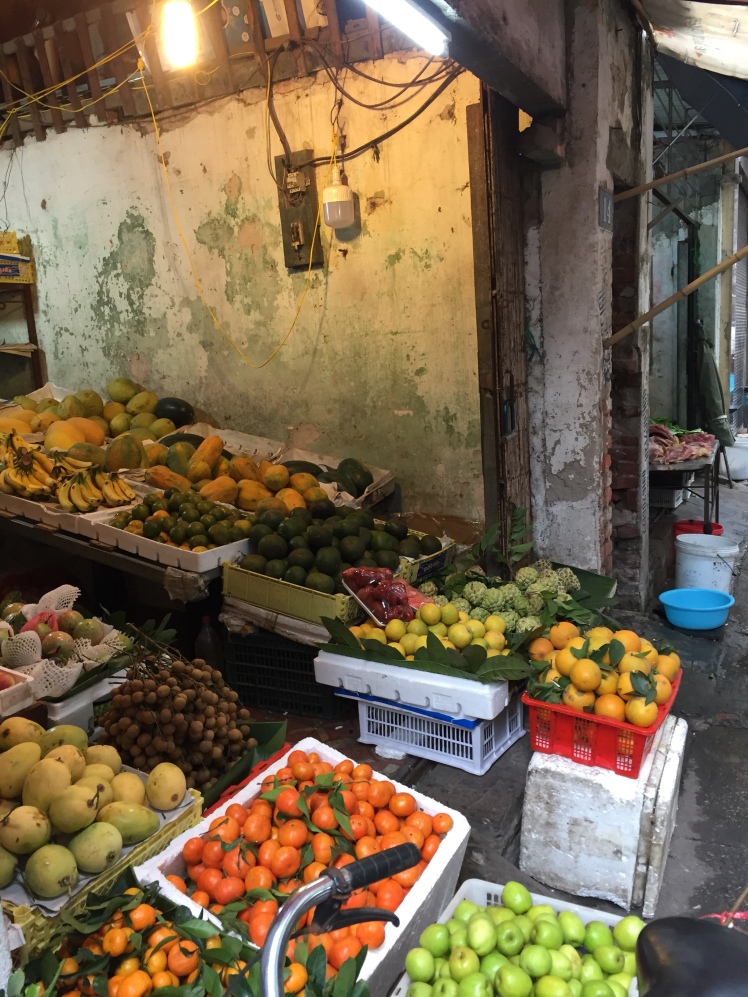 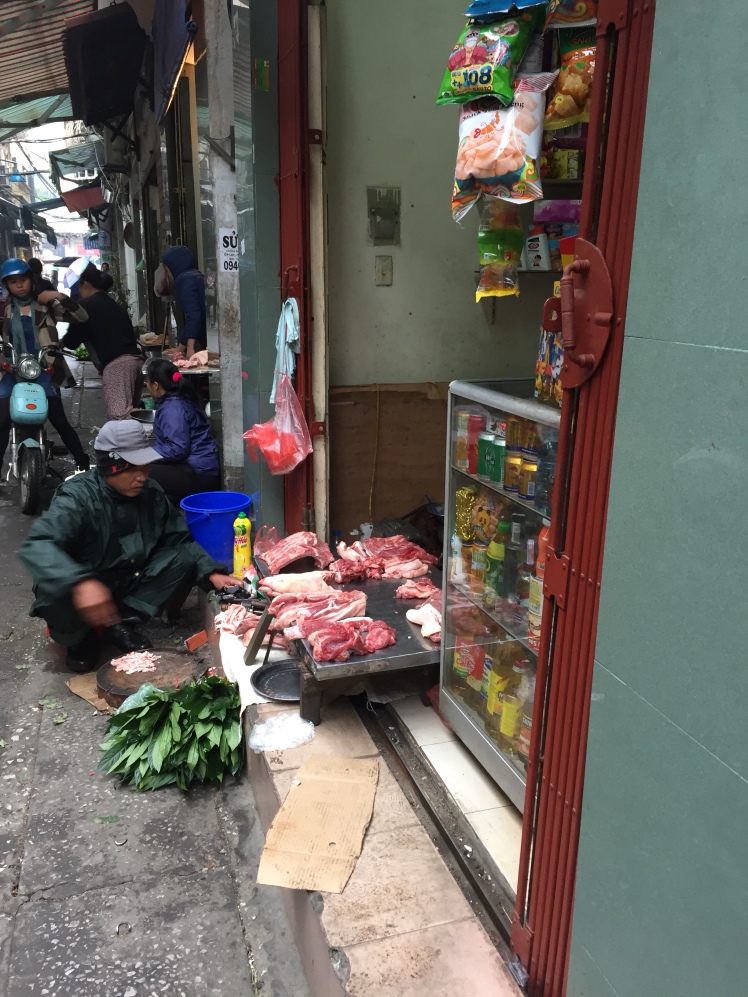 It’s not fair to compare Hanoi to any place else, but that’s what we tend to do. Chiang Mai was also bustling but with only one million people as opposed to eight million, and there was refuge in the quiet alleys and in the hundreds of beautiful Wats and in my yoga practice.

There is no refuge from Hanoi. It takes you in through it’s beautiful rainbow bridge and relatively slow paced nights and then swallows you into a belly of daytime angst where your only thought is to survive. Okay, maybe I am being dramatic and maybe I brought some of the angst with me and Hanoi only revealed what was already there. Something to work on… 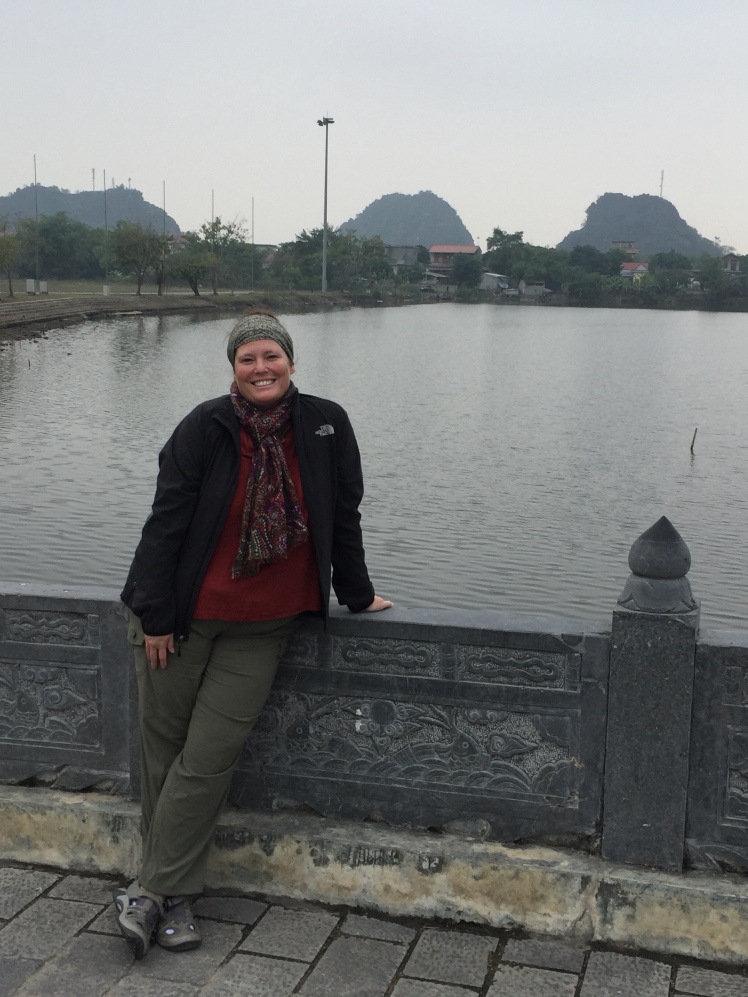 So, looking back there were things I appreciated and liked about Hanoi, first and foremost the people we met.

The people are very good and kind, from Lien and her boyfriend Phuong who drove us from the airport to our hosts who welcomed us into their home and let us have a peek into Vietnamese life and all of the restaurant staff who showed us how to eat all the local food properly. 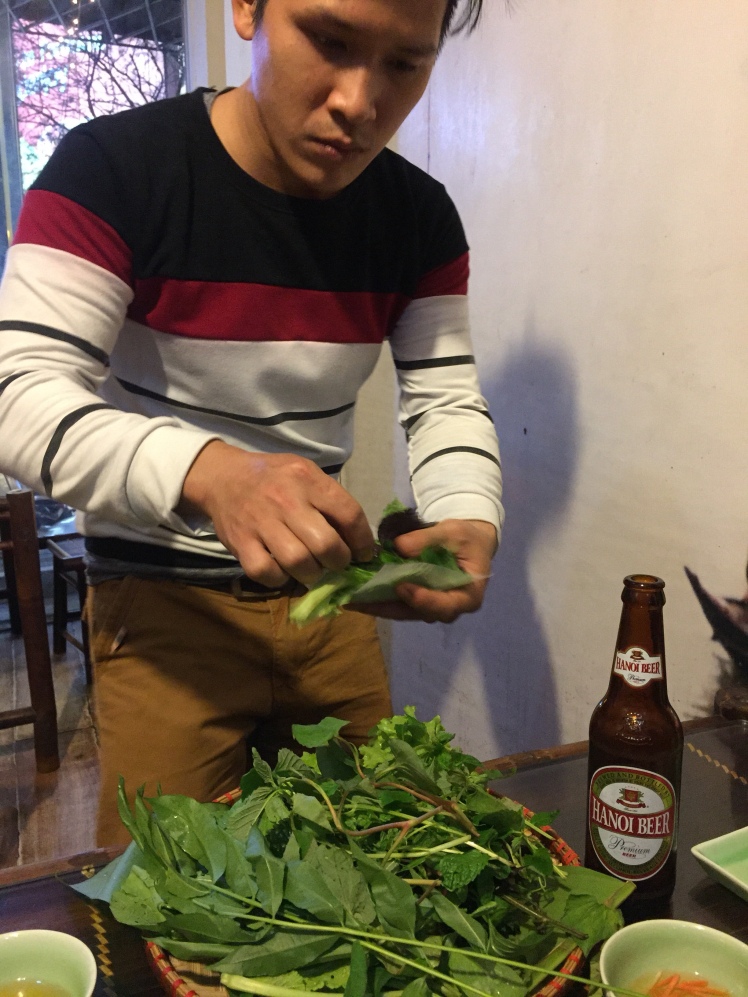 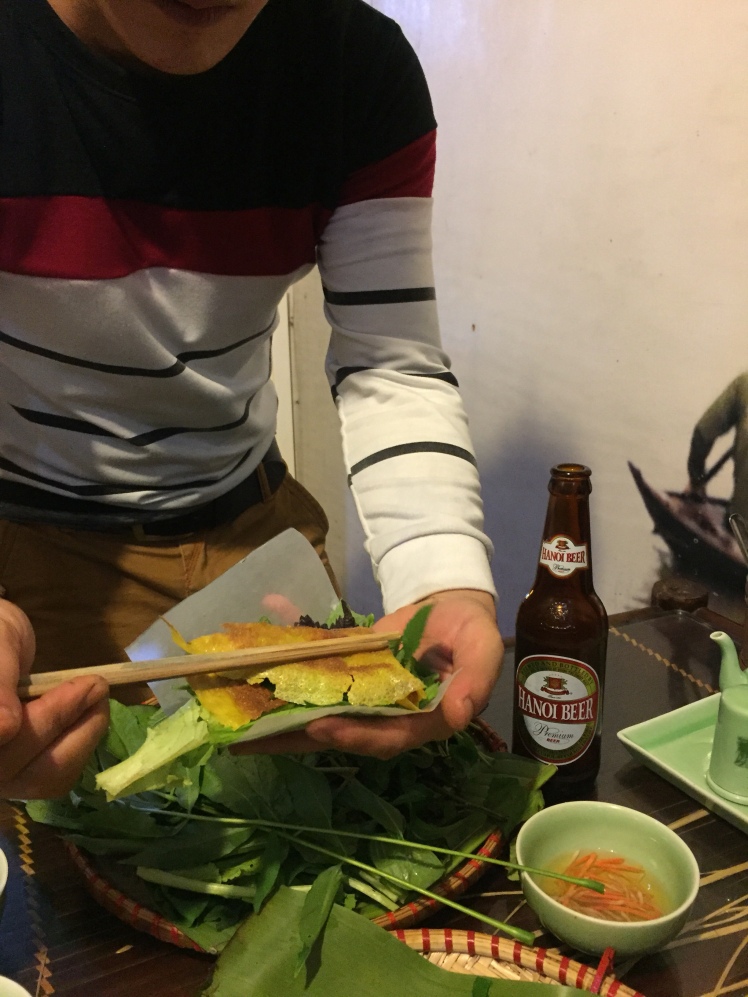 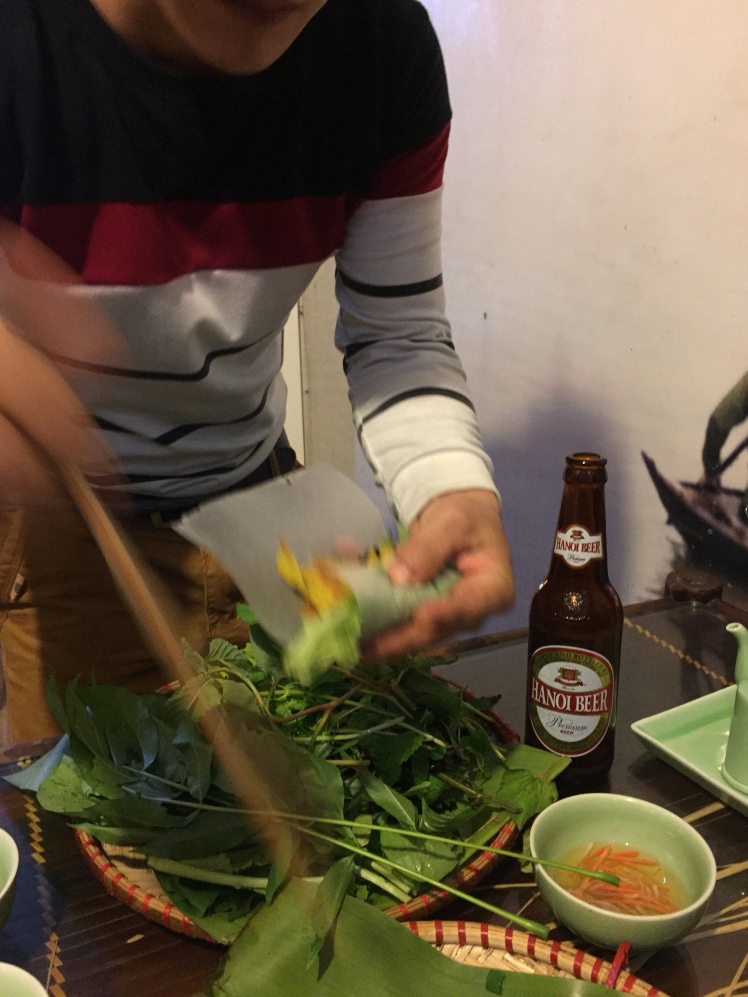 The food is so fresh and simple. The smells of grilled meats and fresh herbs fill the air everywhere. My favorite dish is the Vietnamese pancake, which is a dense coconut flour pancake filled with herbs and shrimp (or other meats) and then wrapped in rice paper with more fresh herbs and dipped in fish sauce. 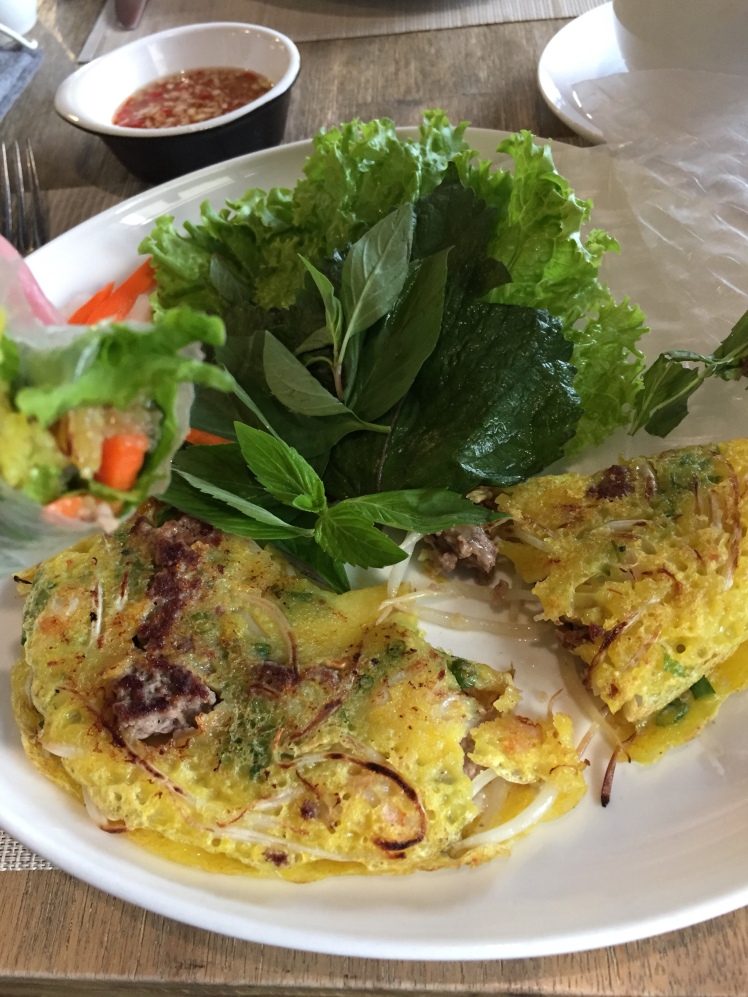 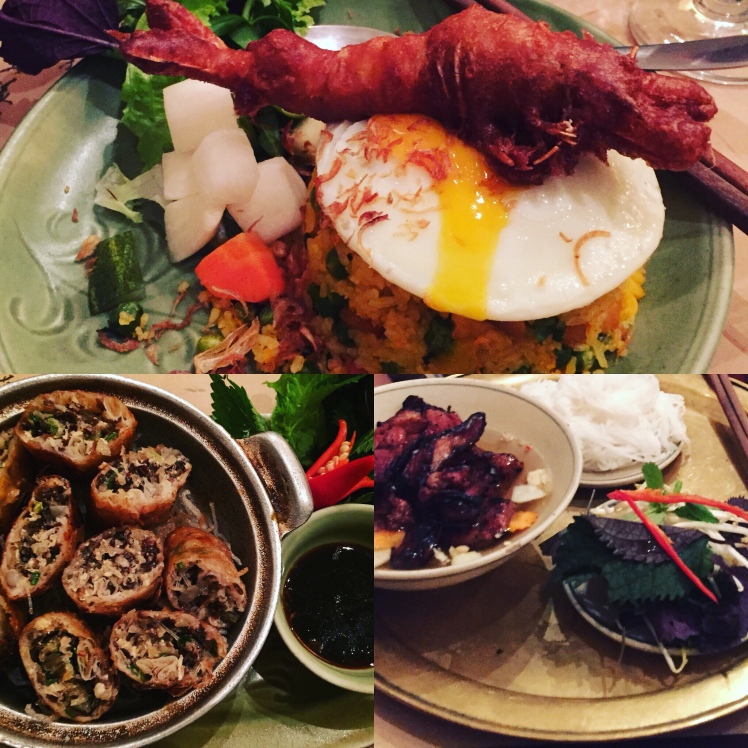 Another favorite meal at Madame Hien’s 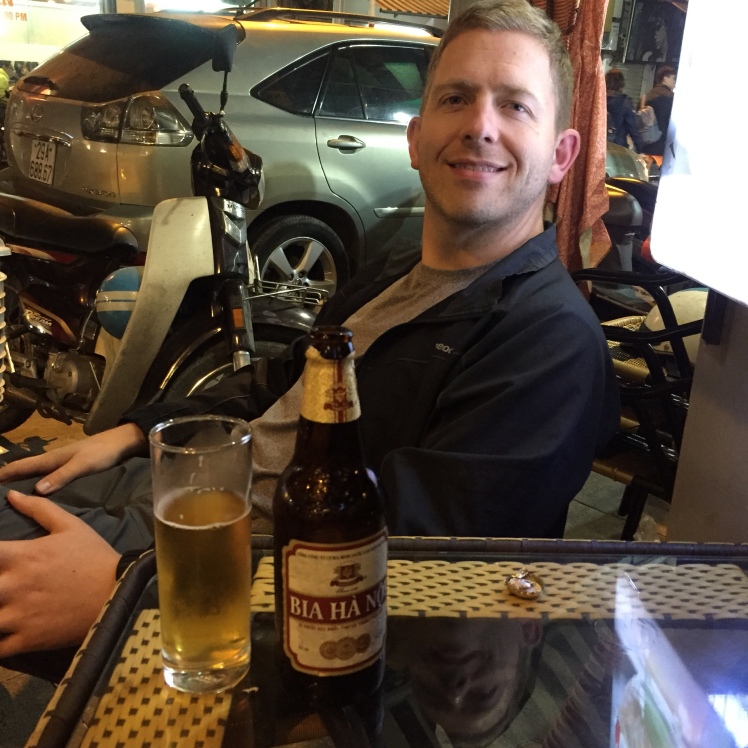 Egg coffee, a Hanoi specialty born from a milk shortage in the 40s, brought great joy. 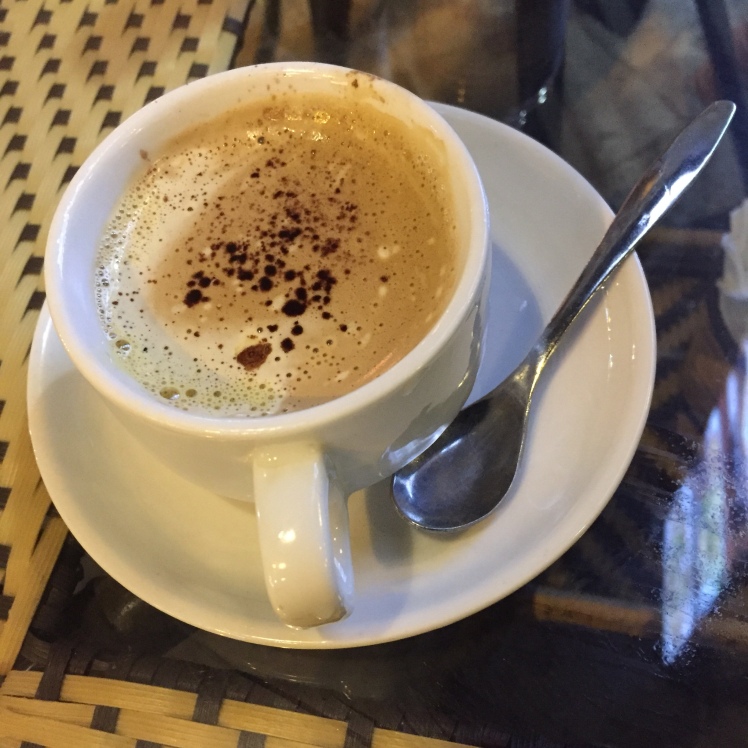 Just an hour or two outside of Hanoi are natural and ancient wonders that you can’t see anywhere else. These journeys that took me just outside out of this throbbing city were my favorite. 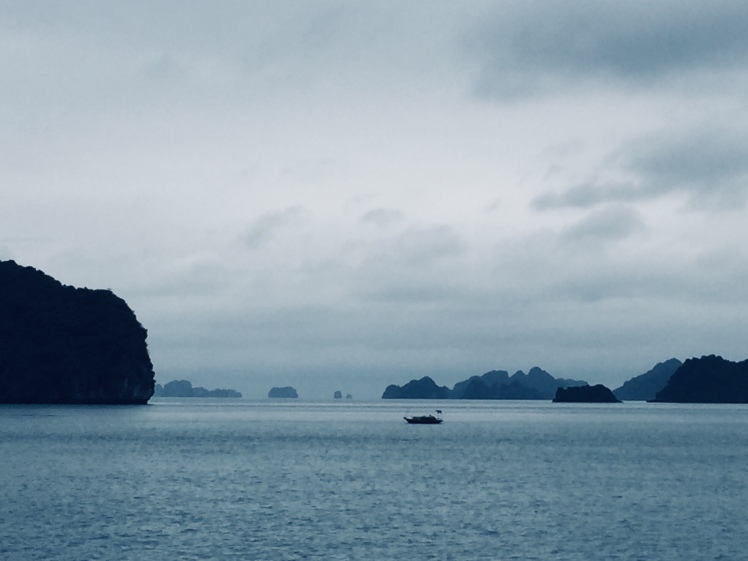 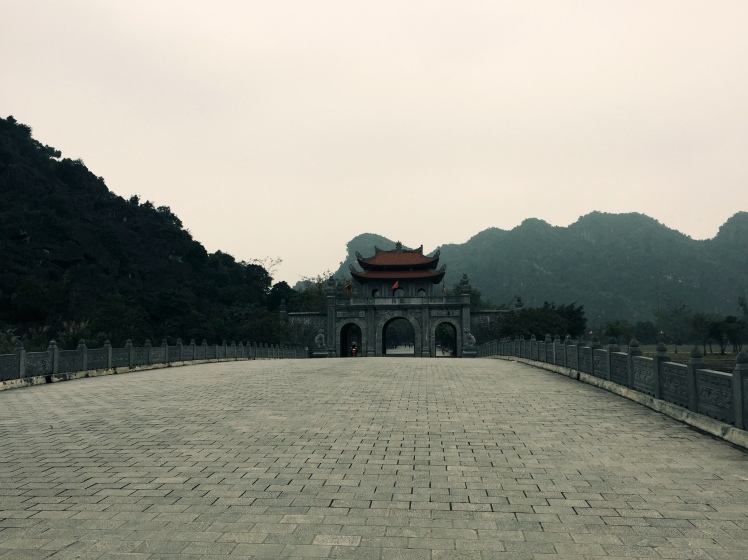 Hoa Lu, the ancient capital of Vietnam in the 10th century 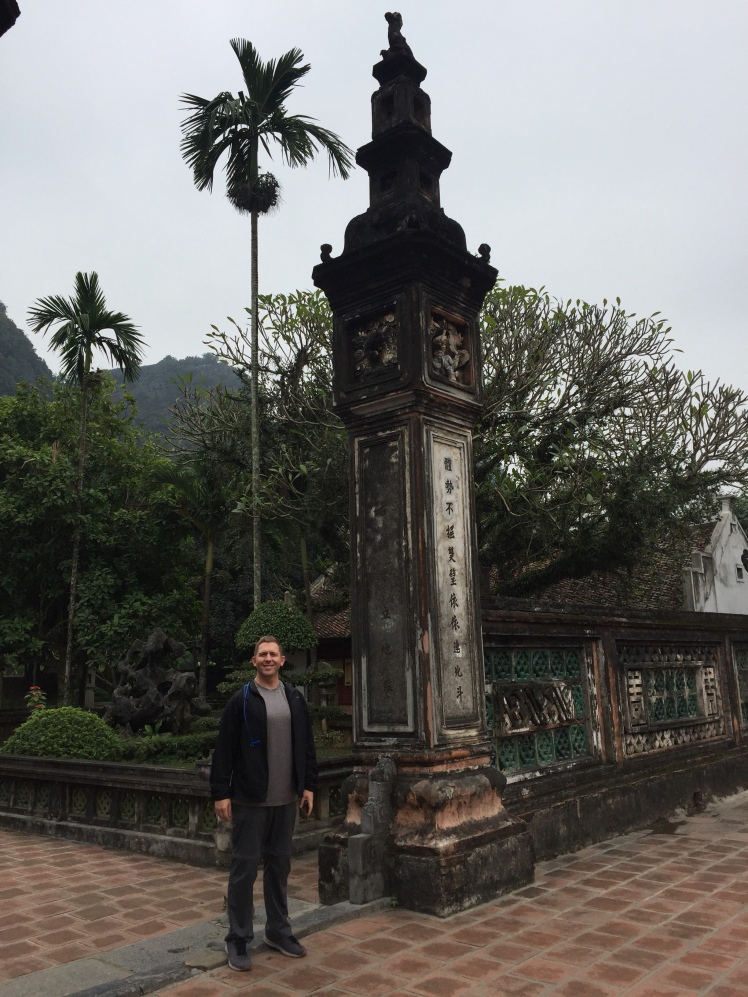 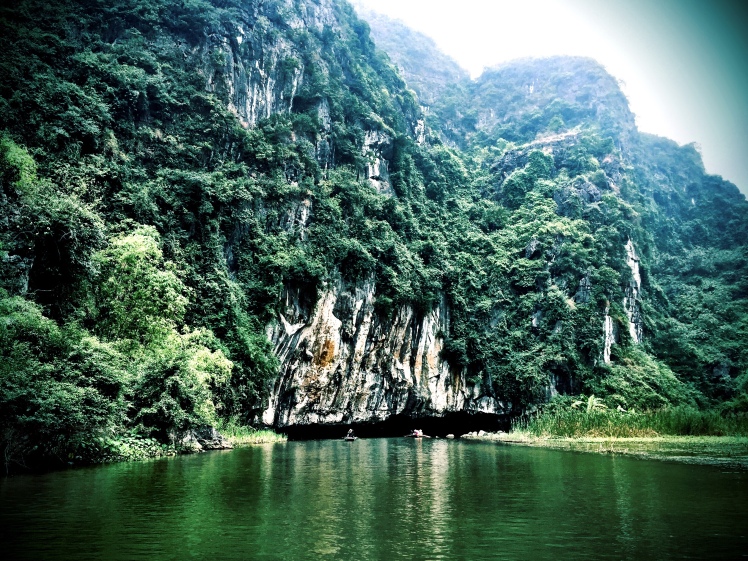 Rowing toward a limestone tunnel in Ninh Binh, a short drive from Hanoi

There is definitely something gritty and good about the persistence of a people and a place that has survived and thrived through a thousand years of conflict, progress, invasions and dynastic upheavals. Sometimes lately I think the USA won’t make it through to see our 250th. 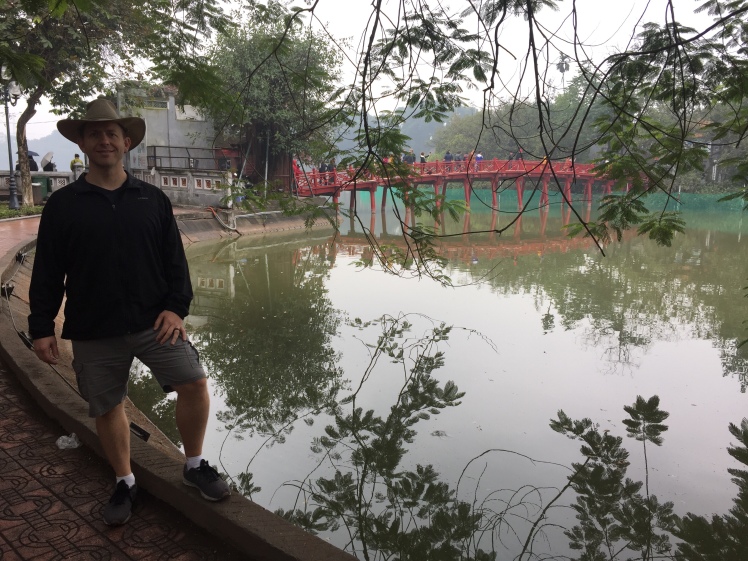 Through all the blah weather and near death experiences and noise that shook me every waking moment, there was progress and determination and an unshakable certainty that tomorrow would come regardless so we better make the most of today.

I might not have loved Hanoi but I can definitely appreciate it and learn a lesson or two from my time there. And maybe so can everyone else. 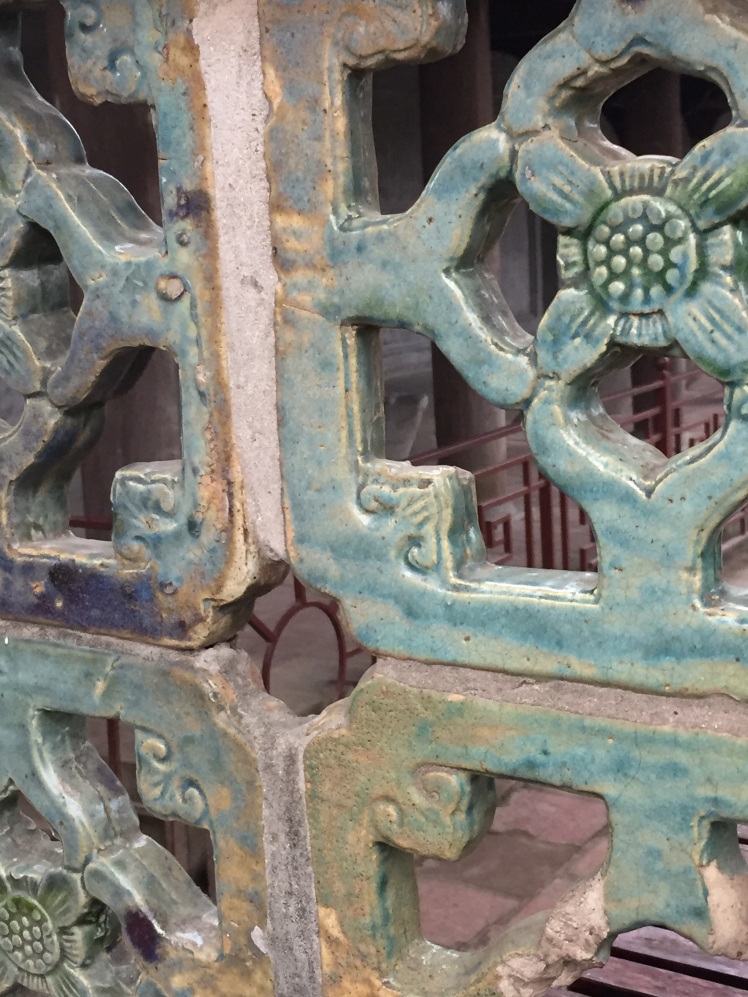 2 thoughts on “Hanoi: the Good, the Bad, and the get me the Phở outta here”