Bangkok was pretty awesome, but we had explicitly decided not to spend too much time there. After all, Thailand is a big country and we were anxious to see more of it.

So, we headed to Chiang Mai, an ancient (but still thriving) city in a northern region of Thailand on the edge of the mountains. I wish I could say that it was a lot cooler than Bangkok, but the temperature only dropped about five degrees. So it is usually around 90 degrees Fahrenheit during the days and around 75 at night. Always humid. I’m actually getting used to it. Reminds me of childhood in Houston.

Chiang Mai is on all the must-see lists and many people raved about it so we rented a studio apartment through AirBNB about a month before our departure to Thailand. We are paying about $17 a night for a little studio of about 450 square feet for four weeks. It has a king bed, a tiny little wet bathroom, a small basic kitchen (no stove), and most importantly an air conditioner. It feels much like a college dorm room, all cinderblock and very basic furniture. There is even a DVD player and a stash of about 100 American movies. It is clean and cozy and simple and perfect for us. Good food is so abundant and cheap that not having a full kitchen is no big deal. Who wants to cook anyway, especially when it is so hot outside? 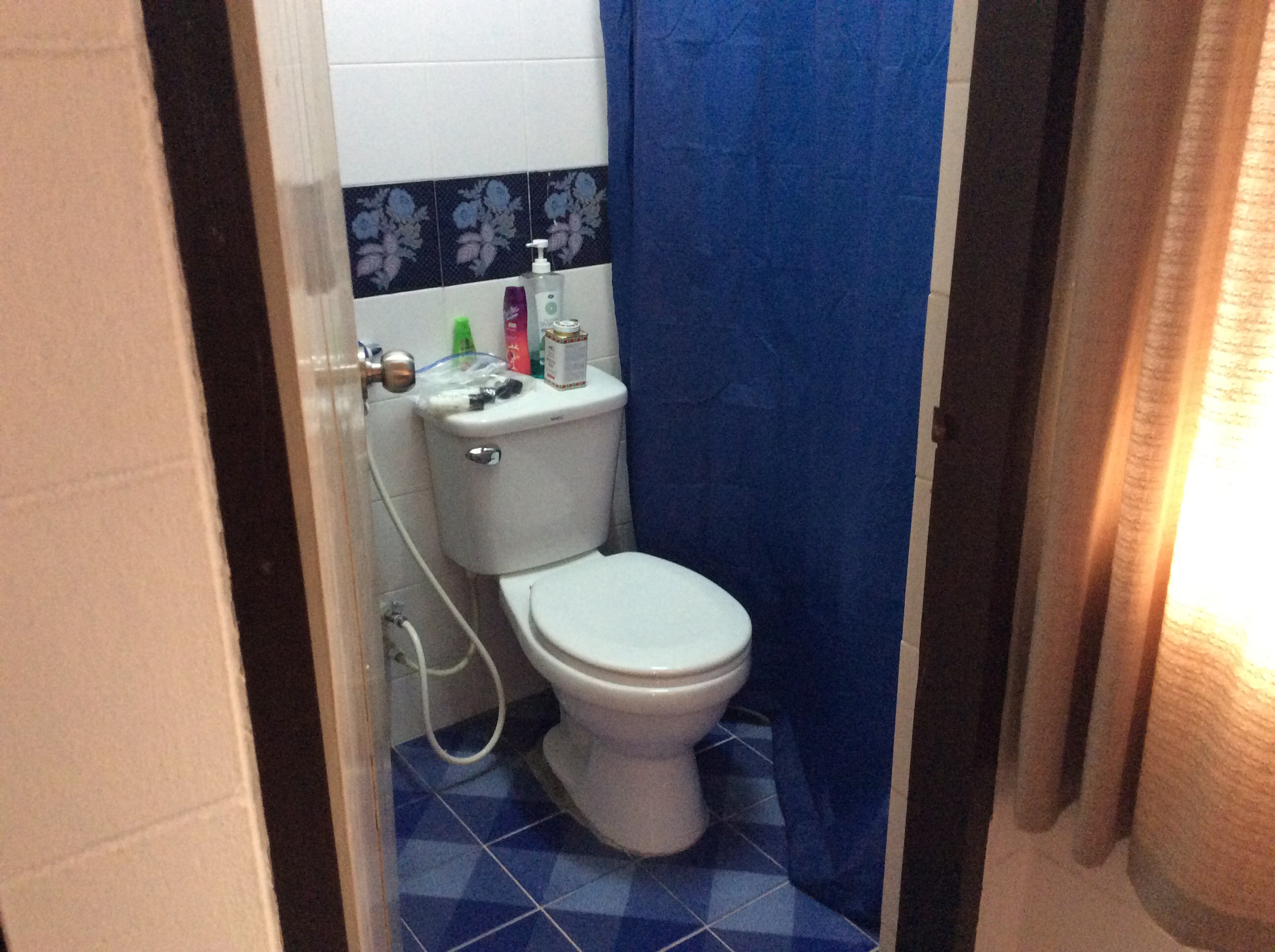 Oh, and the view…(forgive the smudges on the window)

The apartment is located just outside the Old City, which is where much of the shopping and temples and sights are located. 700 years ago the old city was surrounded by walls and a moat. Today only the gates and the moat remain.

Moat around the Old City illuminated in the evening

We can walk nearly everywhere, but a tuk tuk is only a few dollars so we do that a lot too. The locals mostly seem to ride motorcycles or walk. It is not uncommon to see people riding three or four astride a motorcycle. 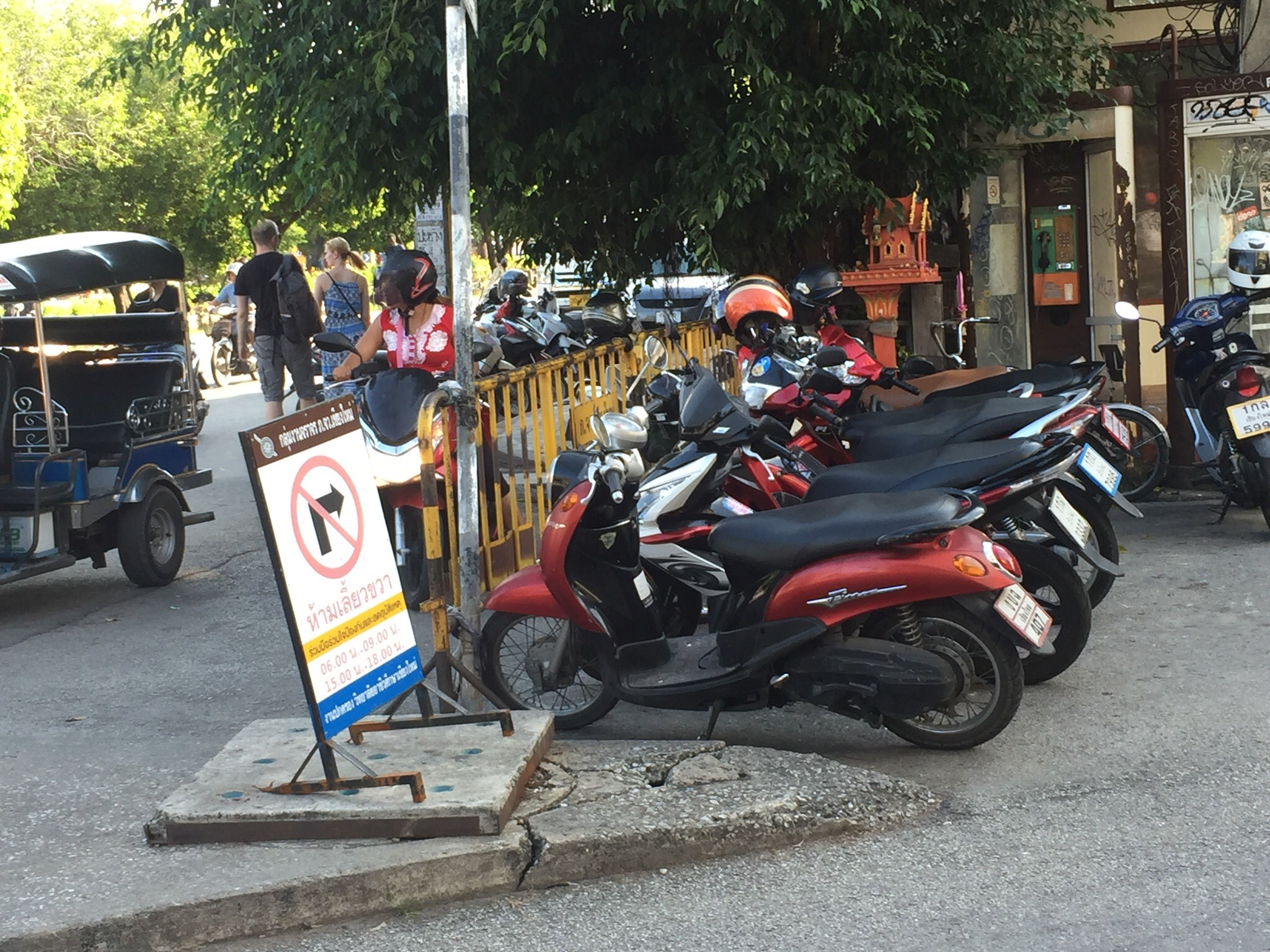 Because we had to plan so much of our first six months of sabbatical (U.S. national parks in the summer book early), we decided to leave most of our overseas adventures much looser. Meaning that we are going with the flow, deciding on our next stop after we arrive at the current one. One week in Bangkok and one month in Chiang Mai were the only things we had planned of our six months before leaving the states. It allows us to be flexible and to really feel like we are living here instead of just passing through from one vacation to the next. That was important to both of us.

Chiang Mai is essentially the northern capital of Thailand so it’s big, but it doesn’t feel nearly as western as its sister to the south, Bangkok. It’s rough and tumble, grittier, more authentic feeling. Full of the same hustle and bustle and Tuk Tuks and taxis and motorcycles and scooters, but no crosswalk buttons so as a pedestrian the danger is much more real! I say a prayer every time I have to run across the street in front of oncoming traffic. Your best bet is to try to cross with a monk. I think they stop for monks.

In our first week, we have been trying to become acclimated to the culture and the customs. We are figuring out what kinds of foods we like, the restaurants we will frequent, which massage parlors are the best, how much we should expect to pay for things, where the grocery stores are, and what kinds of tours and activities we want to try to do while we are here. We are also doing a lot of walking, just exploring. And learning a phrase here and there to show respect for the language. Sawatdee means hello and goodbye. A general all purpose greeting. Men add khap or khrap to the end while women add ka. So I would say “sawatdeeka” to say hello to someone.

Our apartment is situated very centrally near the Old Town area and lots of shopping and eateries and massage parlors. There are so many nooks and crannies in just a few square miles around us that I know I could explore a different area every single day for a month. The Night Bizarre is just a block away and I’m very excited to visit but have been so exhausted at the end of each day that we haven’t made it yet.

So what have we done in the first week?

Walking the Old City (and nearby)

Pop up massage spots like this are very common. We even saw some with mattresses on the ground. 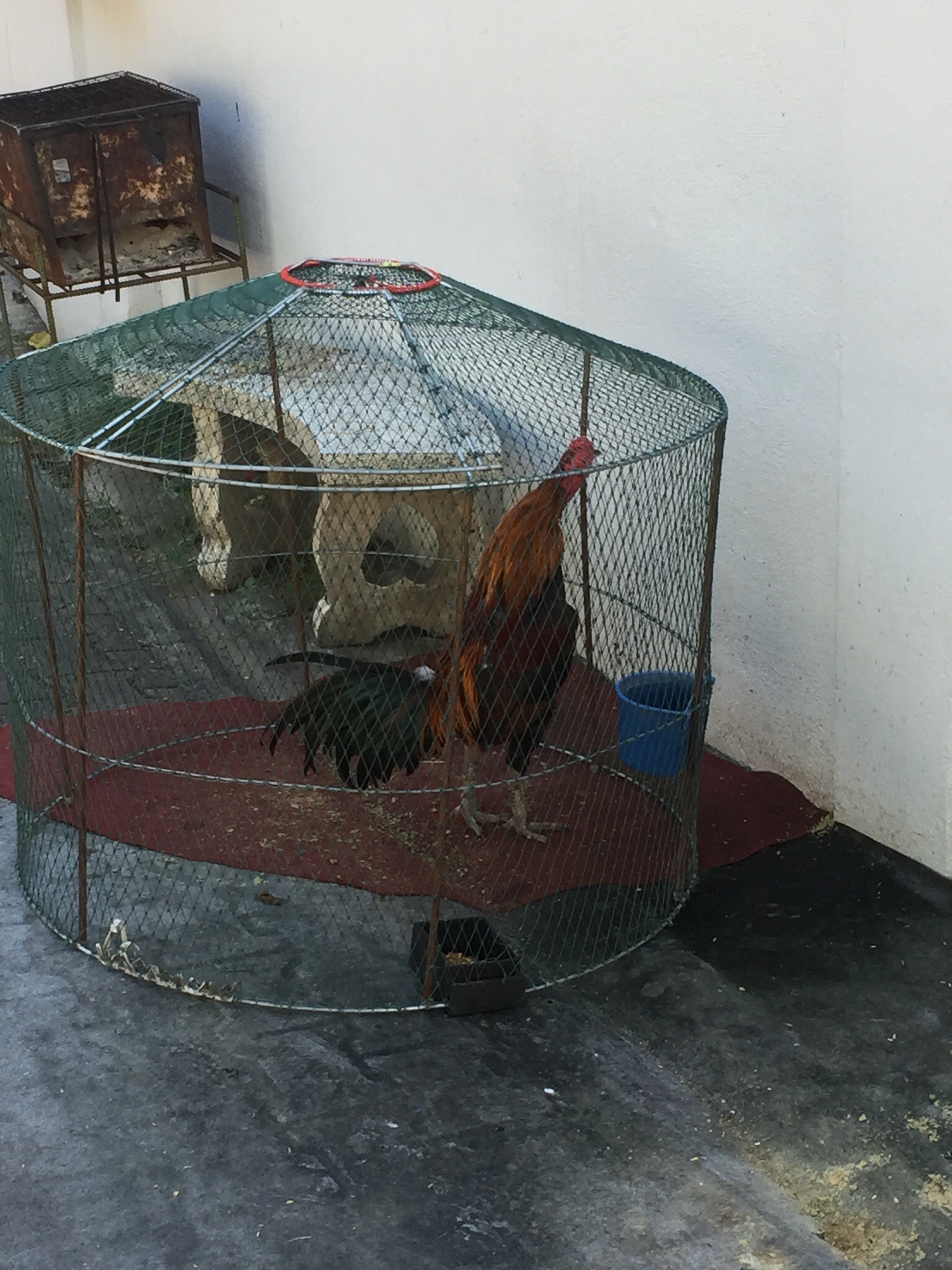 Random rooster. A rooster wakes us up each morning. Maybe this one… 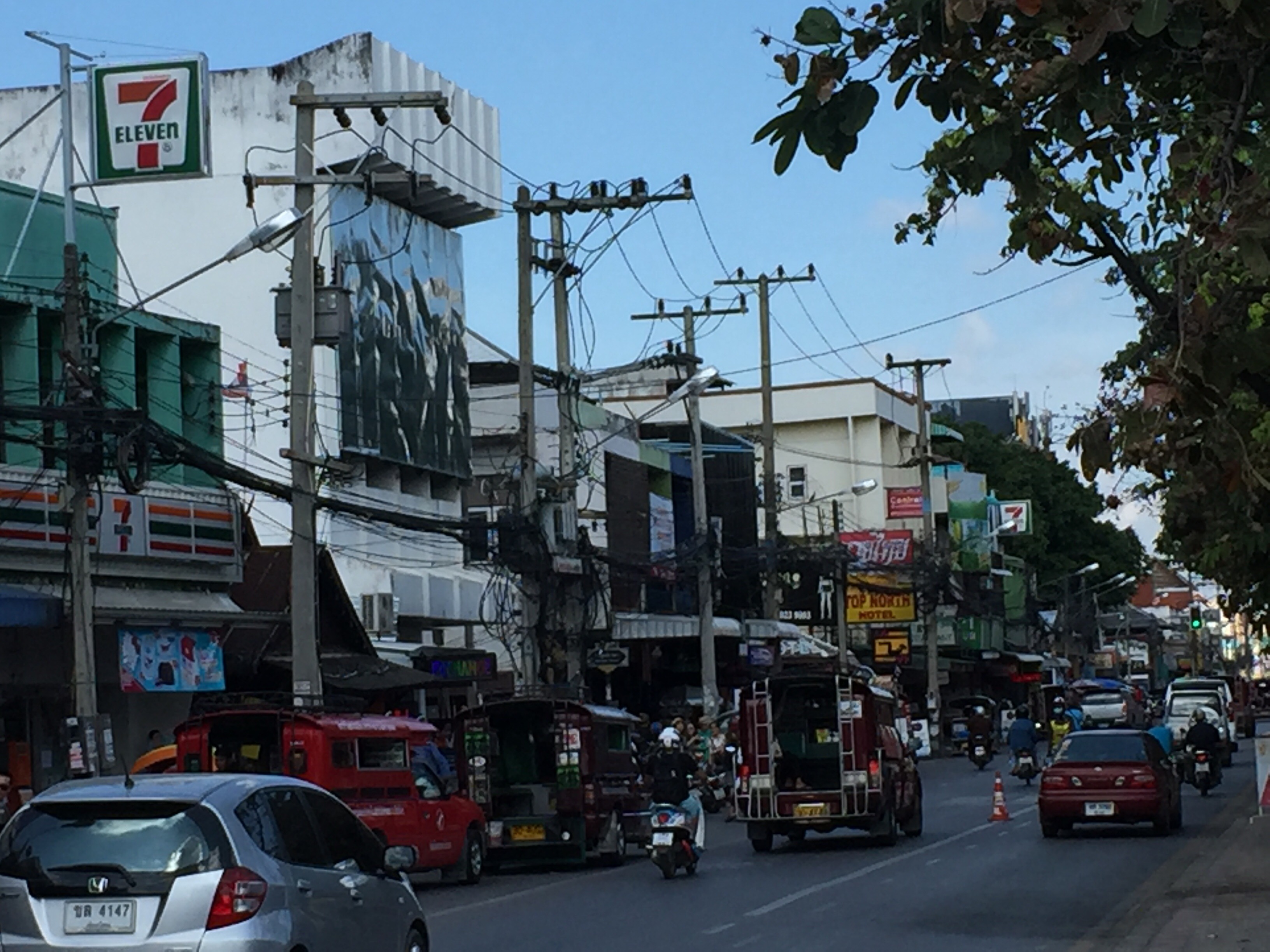 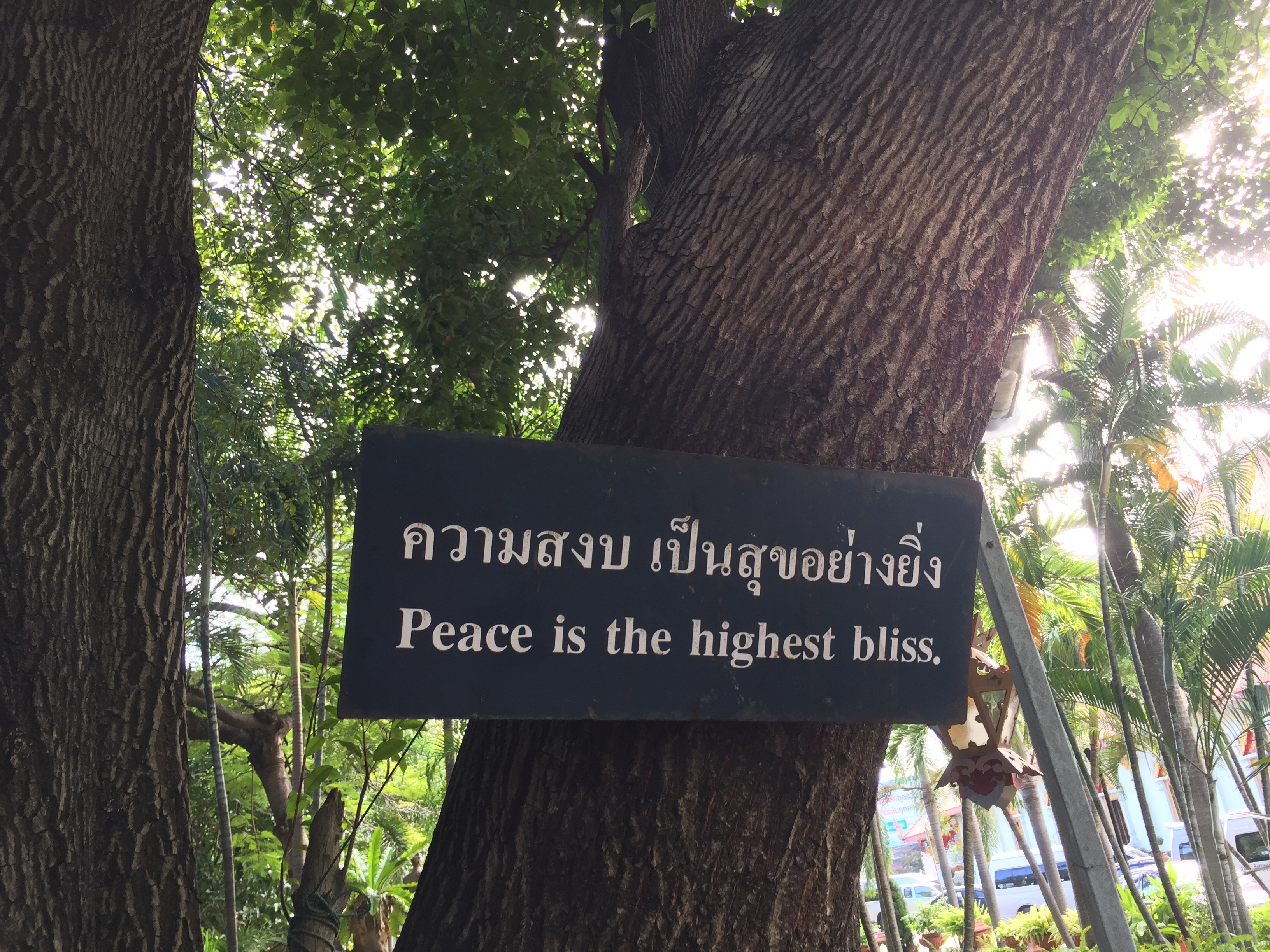 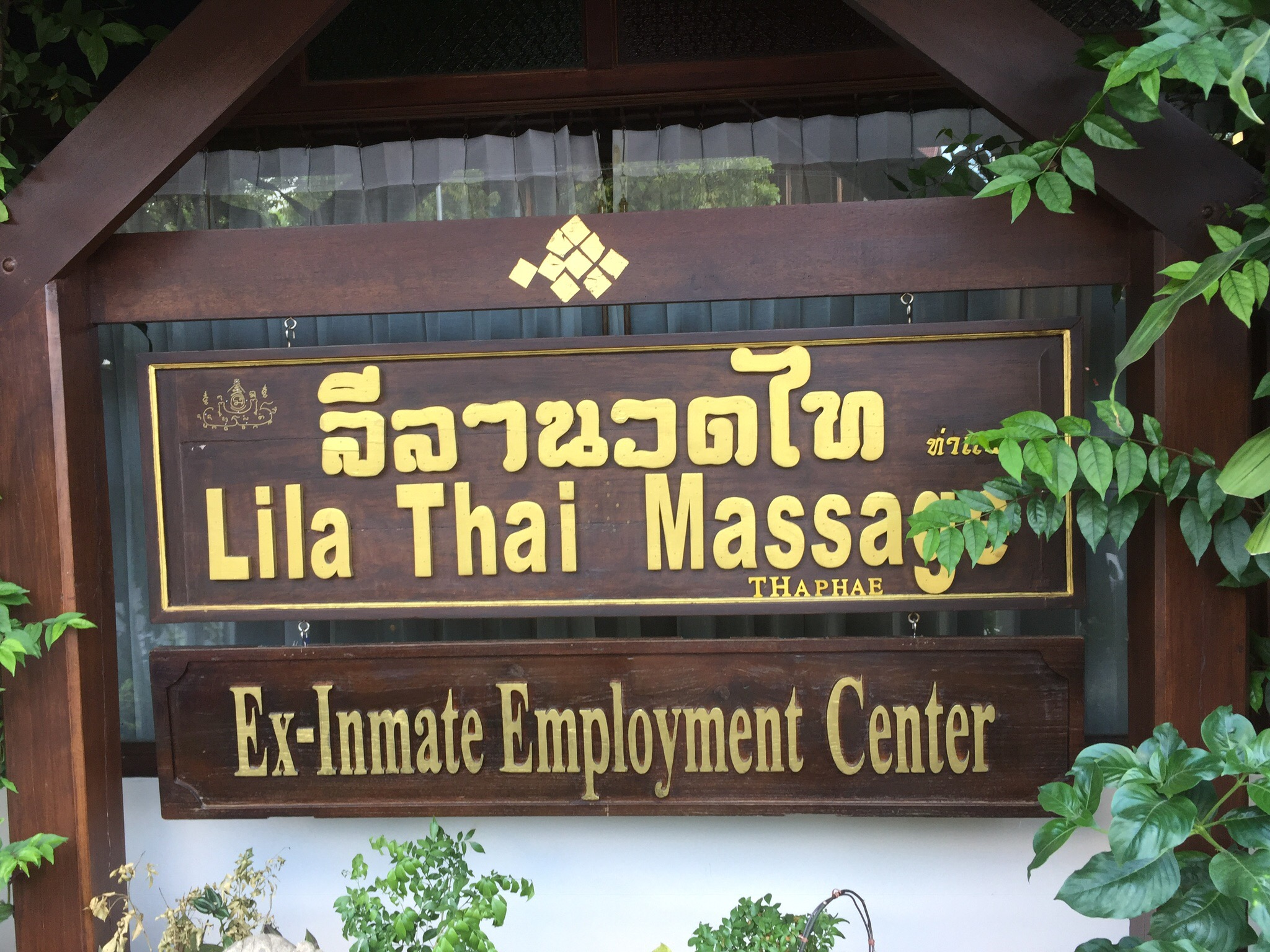 This place employs former female inmates, and they were excellent! My feet are still thanking me! $7.50 for an hour. A little more than other places but more than happy to support such an awesome endeavor of training and workforce development! 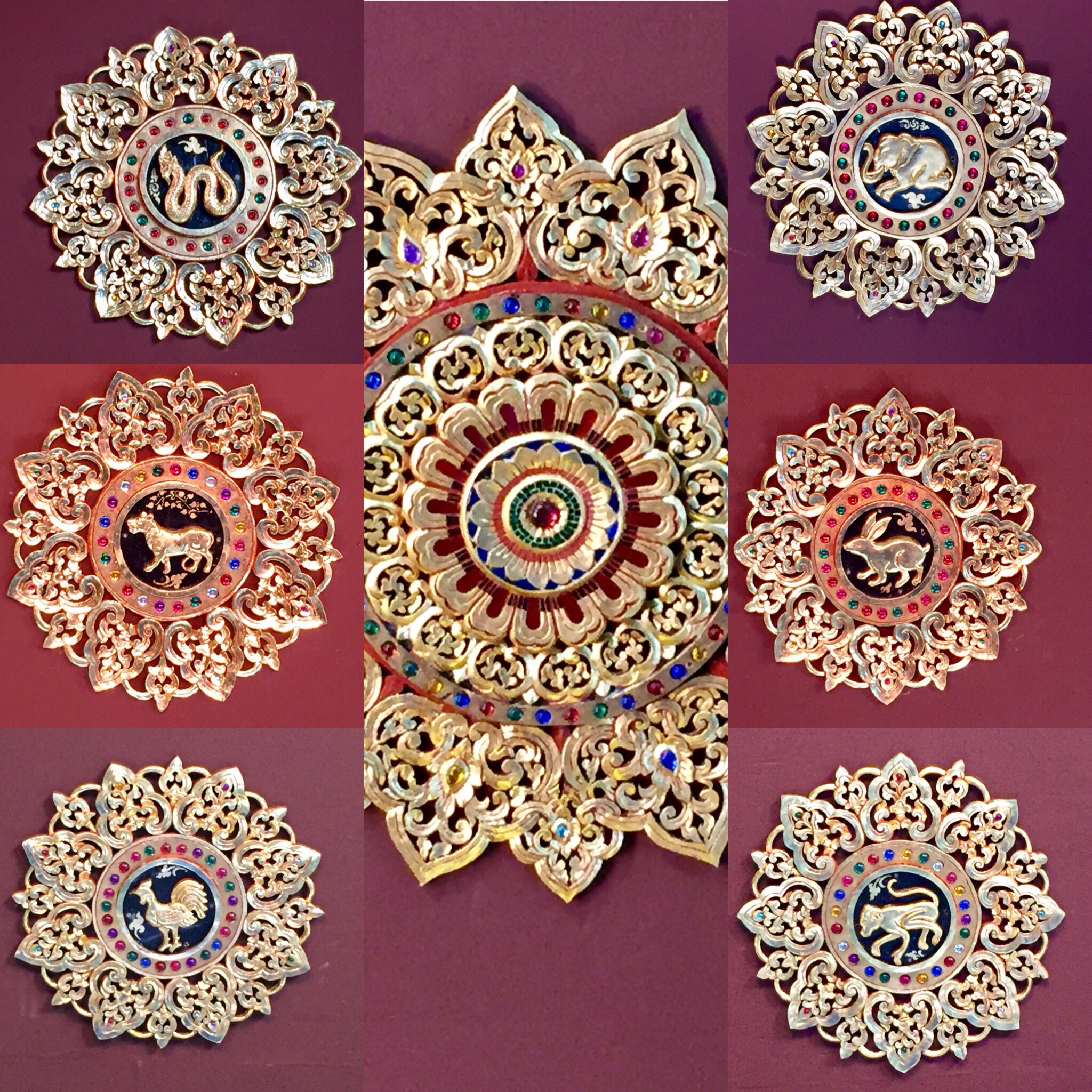 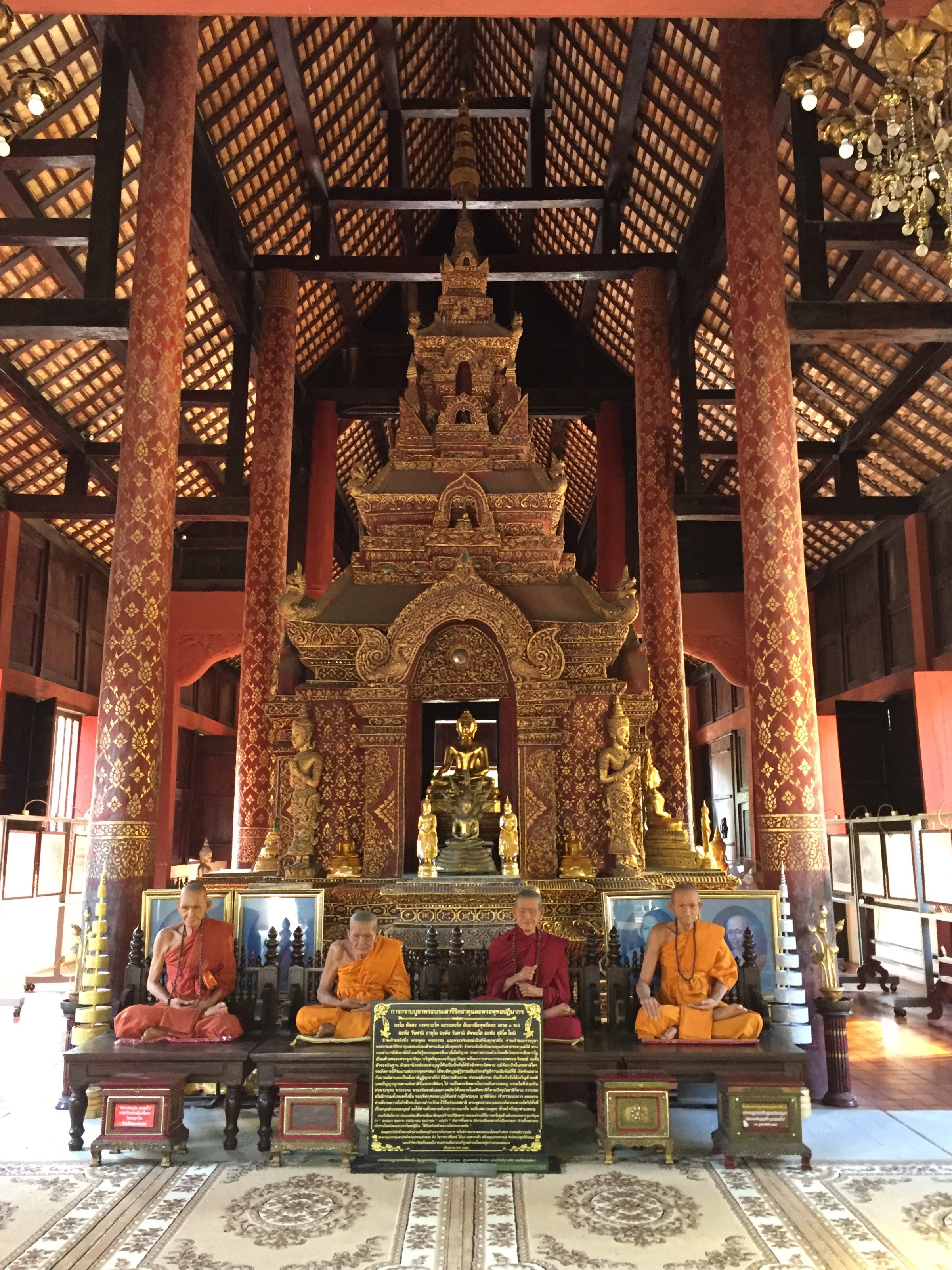 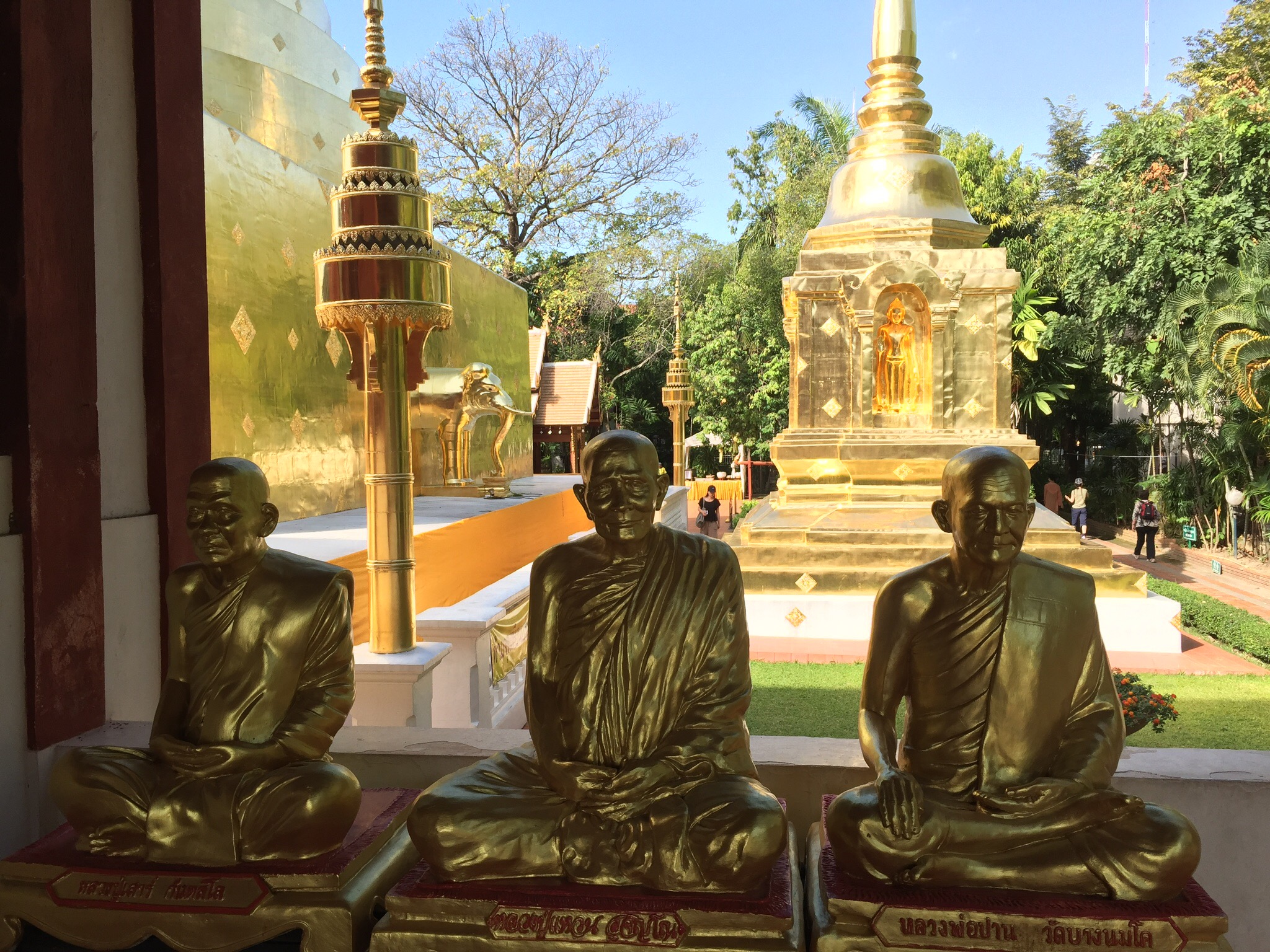 We found a wonderful yoga studio just a short walk from our apartment, Freedom Yoga, and we plan to go nearly every day. The classes are taught by an Australian who owns the place, and he is an excellent teacher. I’ve been to countless yoga classes but not until now was I actually taught the proper way to do child’s pose. Go figure. The studio is in an old teak building on the second floor and classes are $6 for 90 minutes. Hot yoga is my favorite and in this climate every class is hot yoga whether it is supposed to be or not! 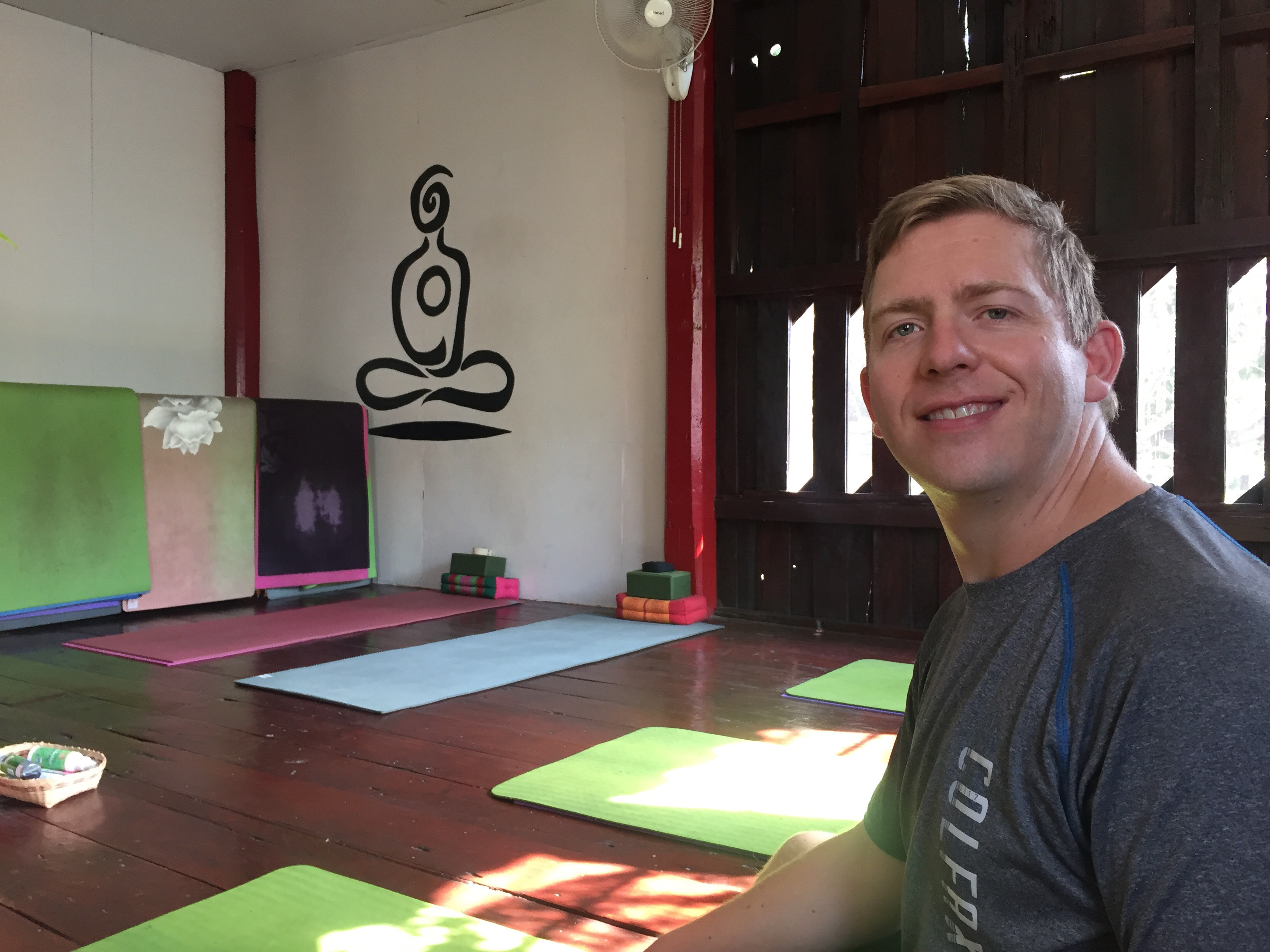 I need to write an entire blog post just on the food, and I will. But for now some of our favorite dishes so far… 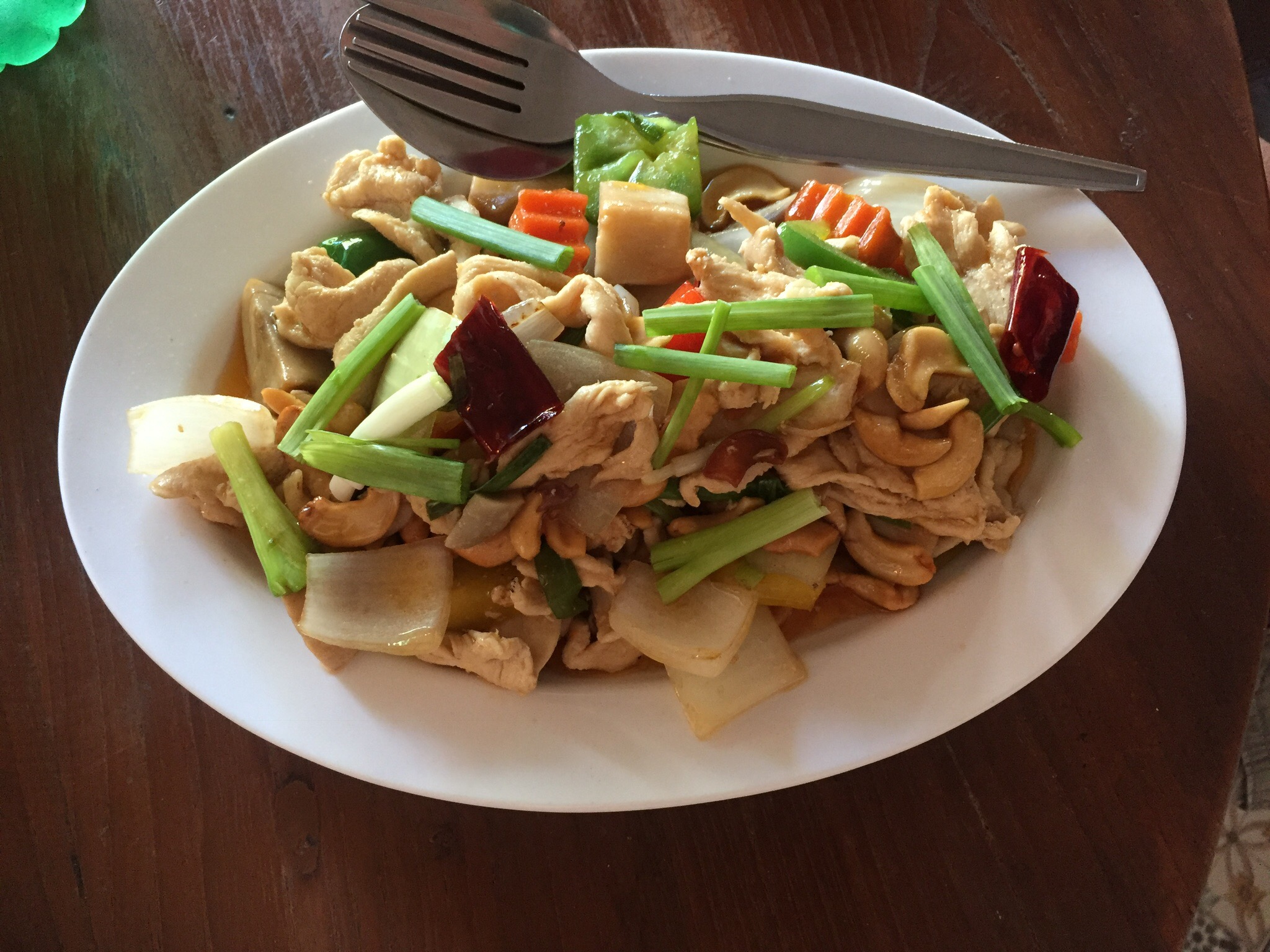 Chicken with vegetables (we eat this a lot)

Rice, chicken with vegetables in a light sauce, and cucumber soup

Sweet and sour chicken and vegetables

For breakfast we often eat yogurt at home or out. Or a few eggs for thirty cents each. 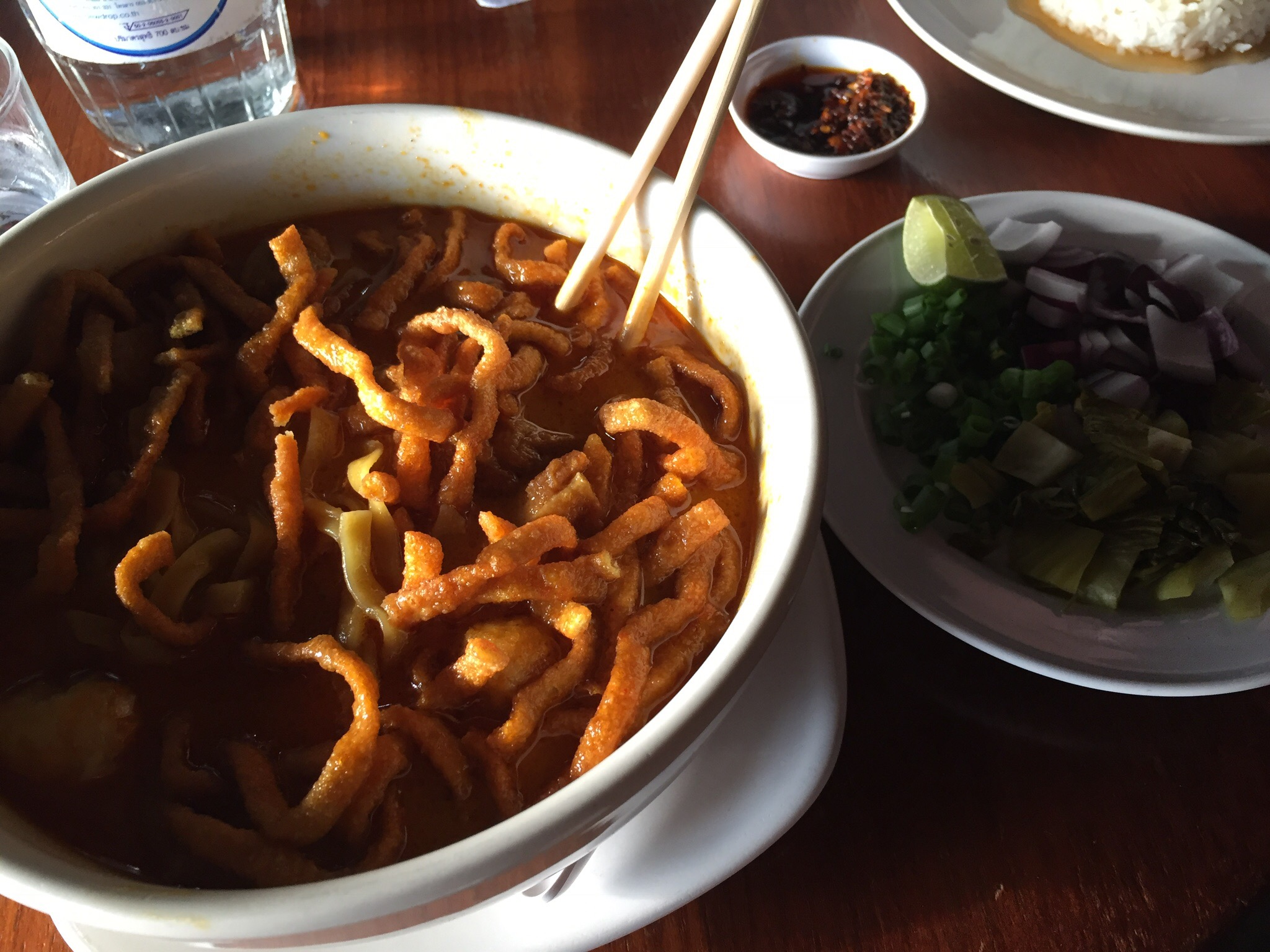 And last but not least, the famous Khao Soi of Northern Thailand–Soft and fried egg noodles in a red curry with a chicken leg and pickled veggies on the side

We have booked a few tours while we are here in Chiang Mai, and the first was a bamboo rafting trip that included a visit to a hill tribe village, a short trek, and an elephant park. I hesitate to write about the elephant park. I was conflicted because there are only a few elephant parks (or sanctuaries) that are recommended for tourists who are concerned about the ethical treatment of the animals and this was not sone of them. However, every bamboo rafting trip included a visit to an elephant park and an elephant ride. Trent and I declined the rides, and simply fed and observed the elephants while the others in our group rode them. It made me sad, and I am looking forward to our trip to the Elephant Nature Park, Thailand’s first elephant sanctuary where we will learn more about how to care for and preserve these awesome animals that have such significance in Thai culture and history.

The bamboo rafting and the hill tribe visit were very cool however. 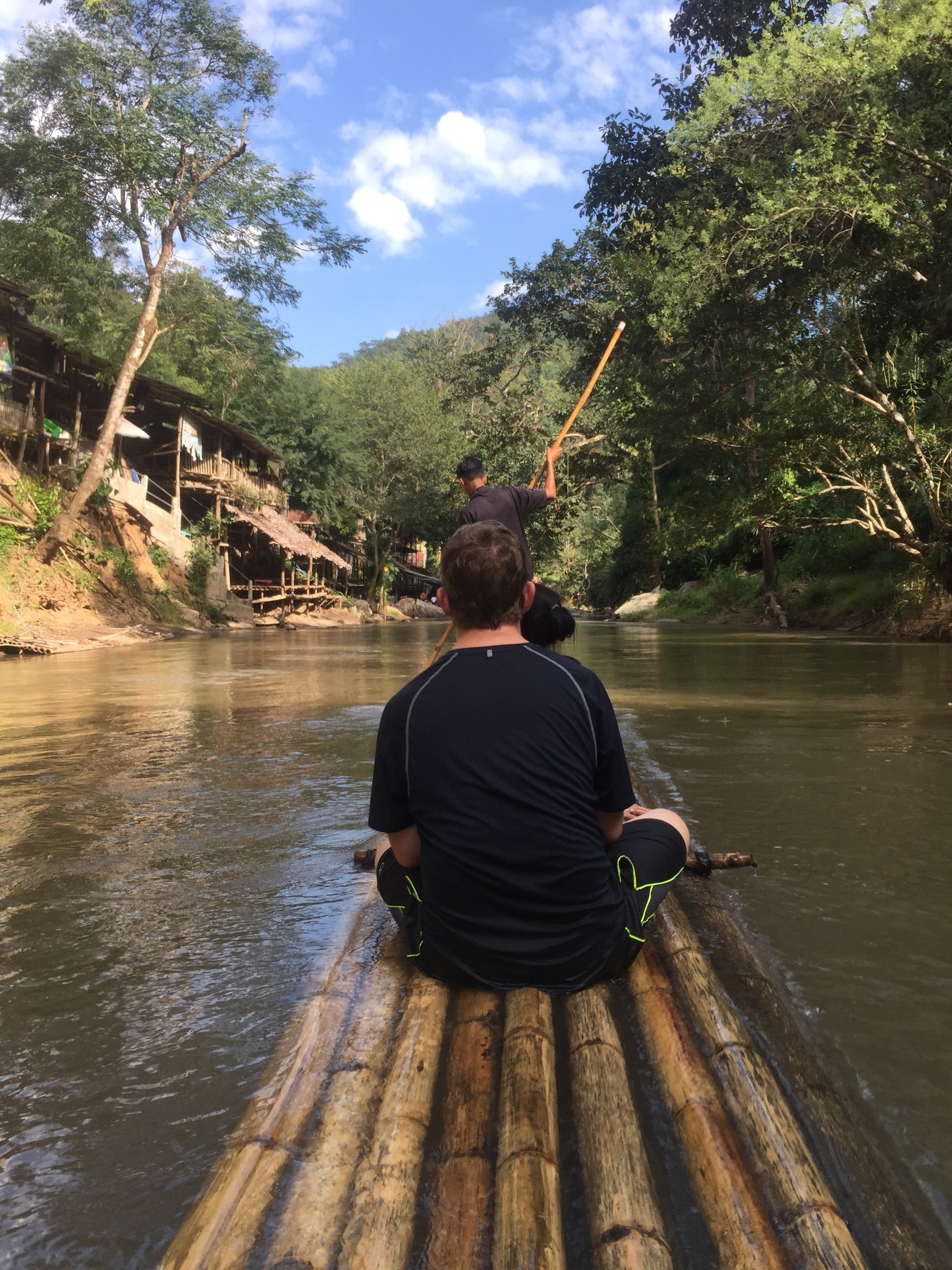 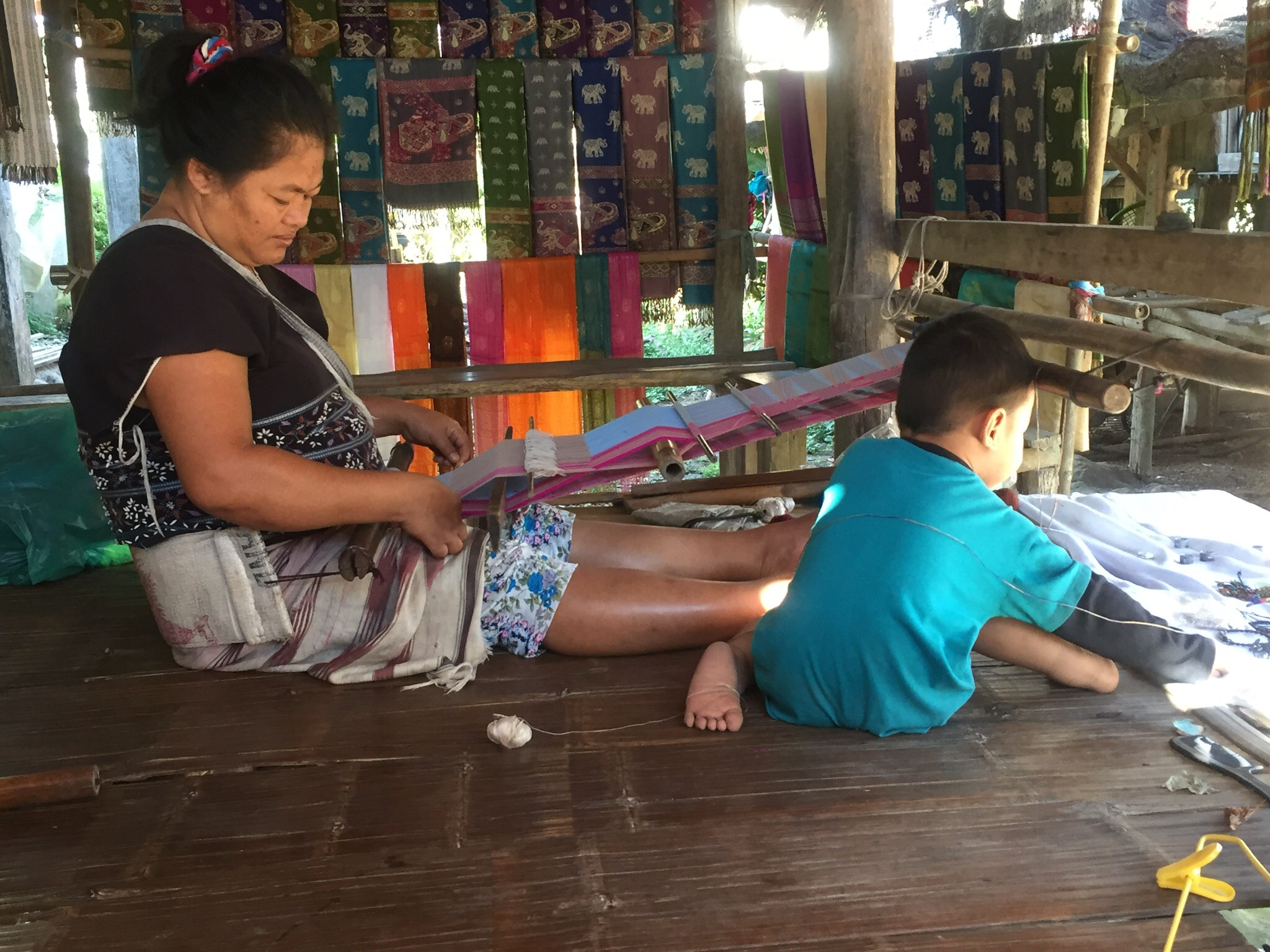 Finally, we visited the Lanna Folklife Museum, which offered a rich history of many parts of the northern Thai culture from Buddhism to family life, farming and textiles. 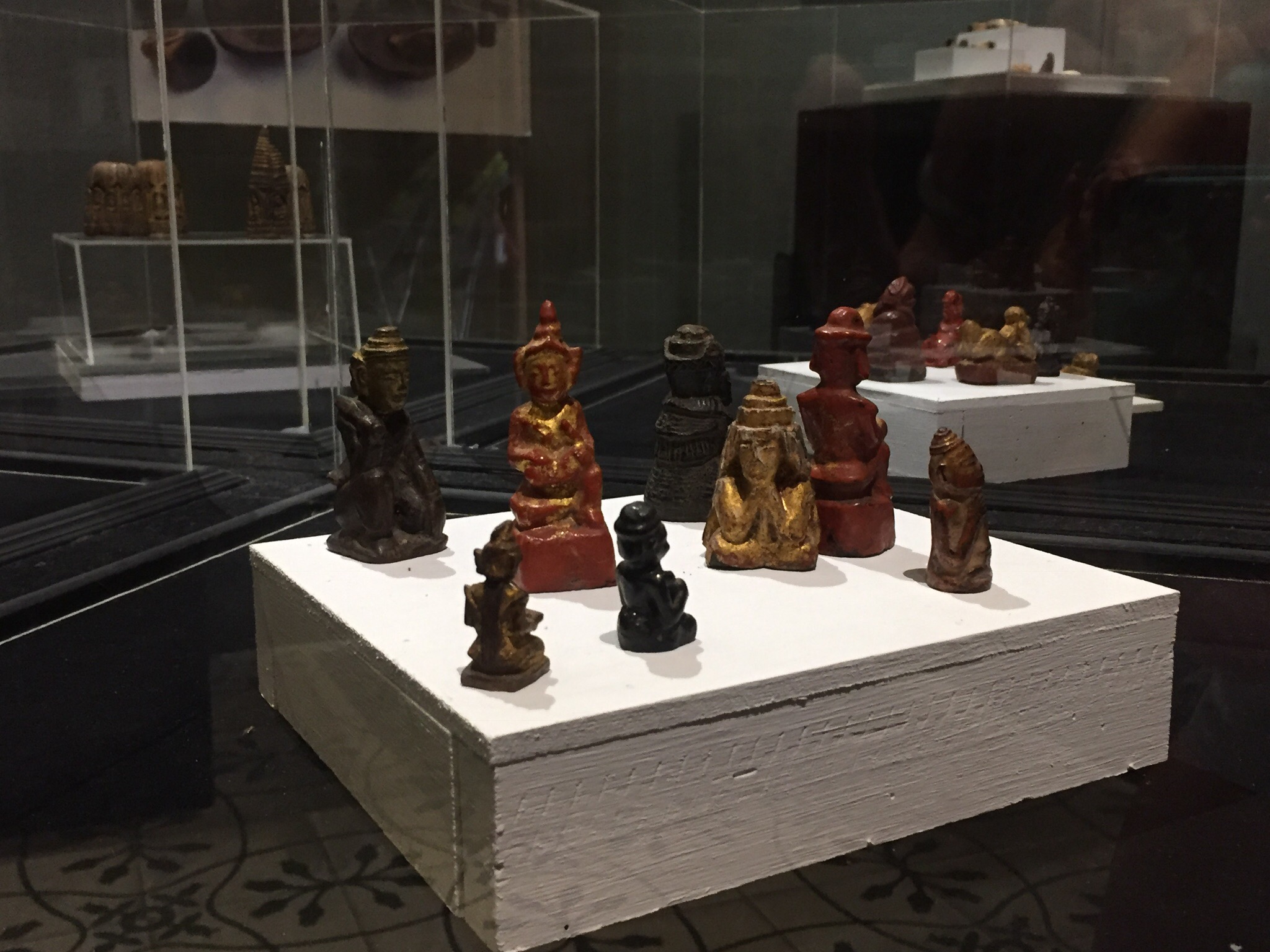 In summary, we love it here. I can not say enough how incredibly nice the people are, going out of their way to be kind and helpful. Showing respect and kindness will take a person far here, and that is something we are all too happy to do in the Land of Smiles.