Towards the end of August, I headed to Los Angeles via plane (what a luxury!) to squeeze in some much-needed girl-time with one of my best buds from college. The plan was for Trent to drive out with the camper and dogs the following week so we could explore California’s national parks, possibly even heading north to Oregon and Washington. This would be our final camping excursion before selling the Freedom Machine in preparation for Sabbatical Part II: Thailand.

Unfortunately, the West Coast was on fire. From Yosemite National Park in California on up to Oregon and Washington and into Montana. Sad and concerning, and enough of a threat and breathing hazard that we decided to change our plans. My thoughts are still with my friends and family in the west who haven’t received much media attention even though the devastation is very real.

My kind and thoughtful husband suggested that we drive to Texas to assist in whatever way possible with Hurricane Harvey relief. The Hurricane devastated Houstonians (and other nearby communities), leaving tens of thousands without a home. I grew up in Texas, used to live in a suburb of Houston (Katy), and so this was close to my heart, and something we both felt inspired to do. Our vision board has this statement on it: help someone in a meaningful and lasting way. We hoped this would be an opportunity to make a difference.

So, we (people, dogs, camper) headed to Texas from L.A., raised $1000 from generous friends and family along the way for donations, and had a brief stopover in the Grand Canyon as our last camping hurrah (separate post to come!). We don’t do things half-way.

Below is the letter we sent to our donors to thank them for supporting the cause. It gives you a good idea of our experiences in Houston.
Dear friends and family:

Thank you for your generosity supporting those affected by Hurricane Harvey in the Houston area. Your willingness to give has impacted many lives, including our own. Rana and I drove to Houston on Sunday, September 17 and spent three days delivering donations to those in need. It was a humbling and transformative experience. Three weeks after the initial devastation, more than 2,000 people were still living in Houston’s primary shelter, and thousands more were in temporary housing without basic living supplies.

Your donation combined with the gifts of other donors totaled $1,000 and went toward the purchase of clothing, diapers, hygiene products and other supplies that were delivered directly to organizations helping with the relief efforts, and in some cases directly to the individuals who needed them. We focused on low-income areas and organizations that had fewer resources than the larger churches and non-profits. In order to maximize impact on the local economy, we also purchased most of the donated items from retailers in the Houston area.

The organizations that received your donations:

American Legion Post 658 supported the hard-hit Houston suburb of Crosby, providing shelter, supplies, and hot meals to 452 neighbors in need. While delivering diapers, wipes and dog food to the post, we met a little girl named Juliana who was rescued from her grandparents house with only the clothes she wore. Thanks to you, she received new clothes to begin the school year. People were still arriving at the shelter even a month after Harvey. I spoke at length to two women who had just arrived seeking shelter after living in a tent for nearly a month. The veterans at the Post were helping to connect them with FEMA resources in order to gain temporary housing.

The Al-Mustafa Islamic Center provided shelter for 45 families, many of them Syrian refugees, in another hard hit, underserved area in Houston. This area was already depressed before Harvey, and was hit twice–first by the storm surge and then by water being released from the dam in the days following. Survivors remarked over and over on the kindness of strangers who rescued them in boats and took them into their homes before shelters were available. Although most of the families who sheltered at the Center had moved on to temporary housing, the Center’s volunteers continued to provide much-needed supplies, including the diapers and wipes we delivered. Sister Neelofer who was coordinating all of the community support expressed her deep appreciation for your kindness.

When we delivered diapers and wipes to the Hebron Seventh Day Adventist Church, Linda and her husband who were coordinating efforts expressed how thankful they were for the diapers and wipes, noting that their small church of 500 members had supported more than 2,000 people impacted by Harvey. They were running out of supplies and still receiving 30 calls a day. Their kindness and appreciation moved us, and we made a second trip to the store to buy more supplies on the spot, specifically toilet paper and paper towels. In awe and appreciation that your support found its way to her church all the way from Colorado, Linda invited us to her home for dinner, an offer we had to decline in order to keep making the rounds. 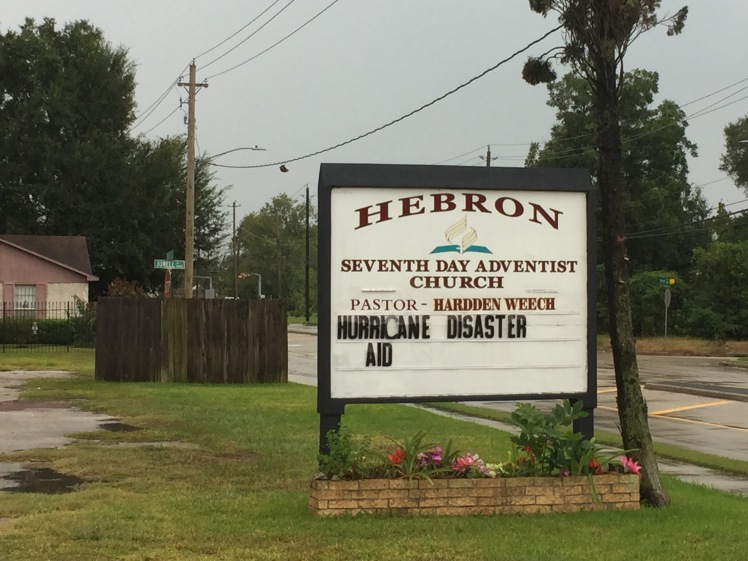 Drew Academy, a public middle school in north Houston, serves primarily low-income (71% free or reduced price lunch) students of color (62% African American and 36% Hispanic). We worked with the school counselor to identify all of the students who, due to Harvey, had no school uniforms to start the year. We purchased two school uniforms for each of those students, six boys and two girls. Additionally, we learned that the homes of three faculty members were damaged, and the school custodian lost everything he owned. Your gifts provided cleaning supplies to the three teachers and new clothes and hygiene products to the custodian. We had the chance to talk to the custodian, and tears filled his eyes as he described losing everything he owned for the second time in only a few years due to a hurricane.

Finally, we spent a day volunteering at the Friends of County Pets animal shelter, playing with the dogs and providing them some much-needed outdoor time. We also delivered 100 pounds of dog food to the shelter, which had taken in nearly 150 pets since Harvey and was also helping to reunite owners with pets they lost in the hurricane. 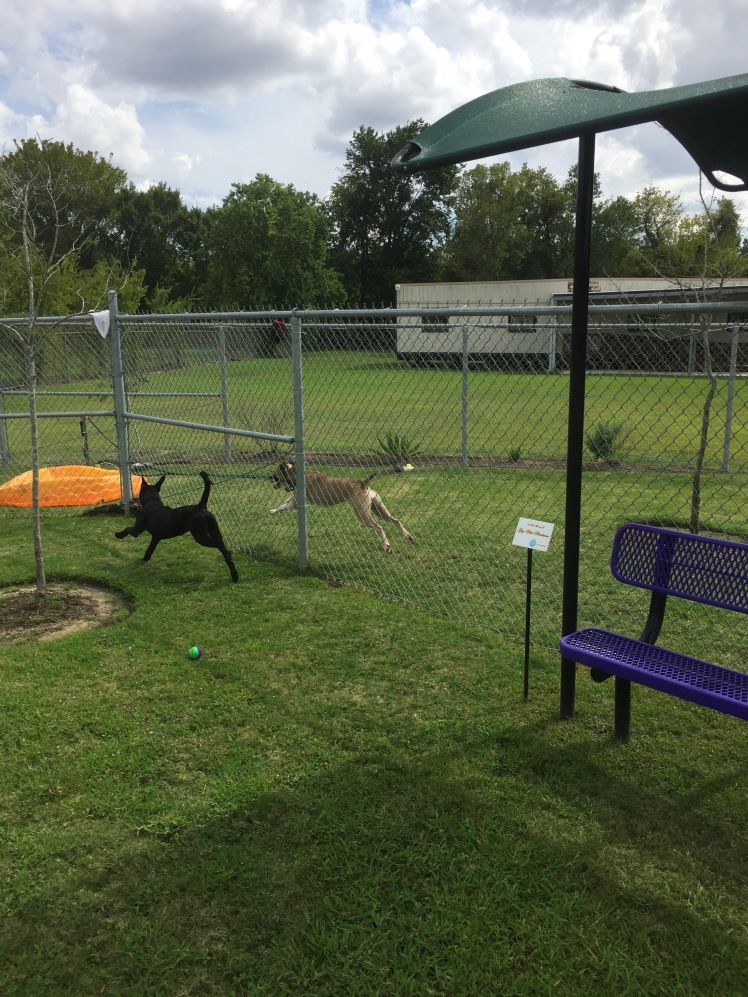 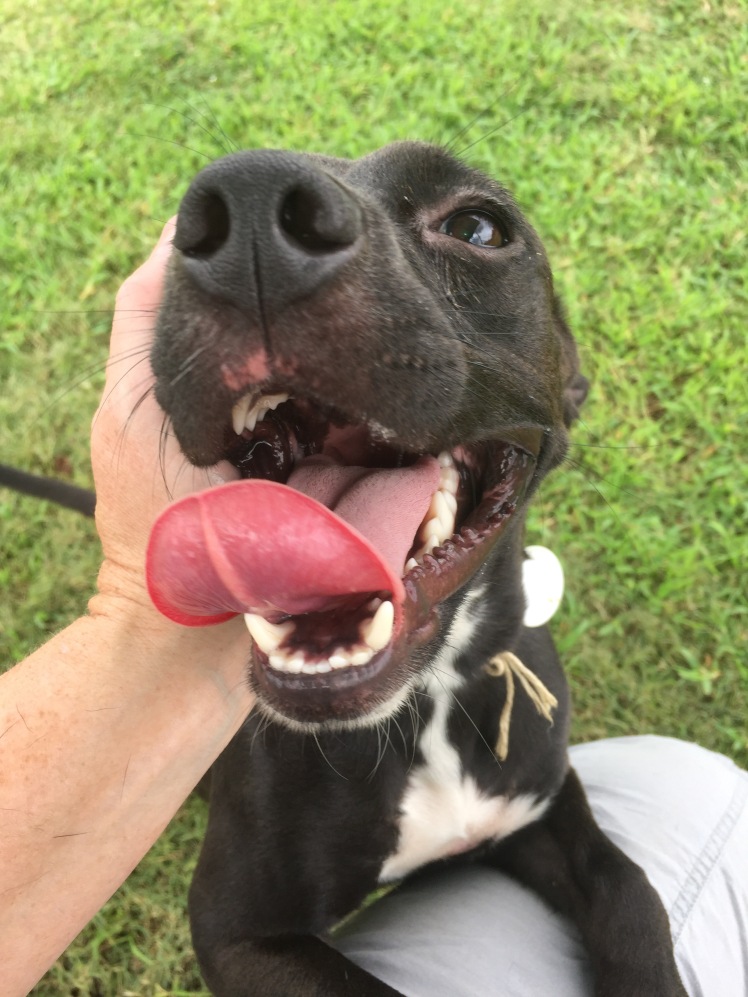 As you can see, your impact is very real and very powerful. Thank you for supporting the people of Houston and for allowing us to be your voice and surrogates. We gained much from this experience, and we hope that the stories we shared here inspire you to continue giving back to communities in need.
Love,

This experience was deeply profound and rewarding in how personal it was. We met the people who were impacted. We heard their stories. We asked them what they needed and did what we could to meet those needs. It wasn’t a huge amount of money, but we made it go a long way. A good reminder of how much power each of us has to make a difference, especially when we work together.

It makes us want to look for even more opportunities to give during the remaining months of sabbatical (and beyond). I am certain that we will find those opportunities in Thailand. We know we are privileged to have the capacity to give our time and money to those in need, and we believe it is our responsibility to do so. We also hope we can inspire others to do the same.

By the time we returned home, we had put 5,000 miles on the car in 21 days, and we were exhausted and deeply satisfied.

Next stop: Thailand (by way of a family visit in Texas)