The Hike: The Loop Trail to Granite Park Chalet

It sounds so nice and quaint, doesn't it? A chalet, surrounded by lovely flowers, charming decor, and talking squirrels. A perfect place to rest after a heart pumping 4-mile hike, before heading back down the mountain.

Not quite so. This hike nearly killed me. Really. I thought I would die on that granite mountain and it would have been okay with me if it meant I didn't have to take another step. 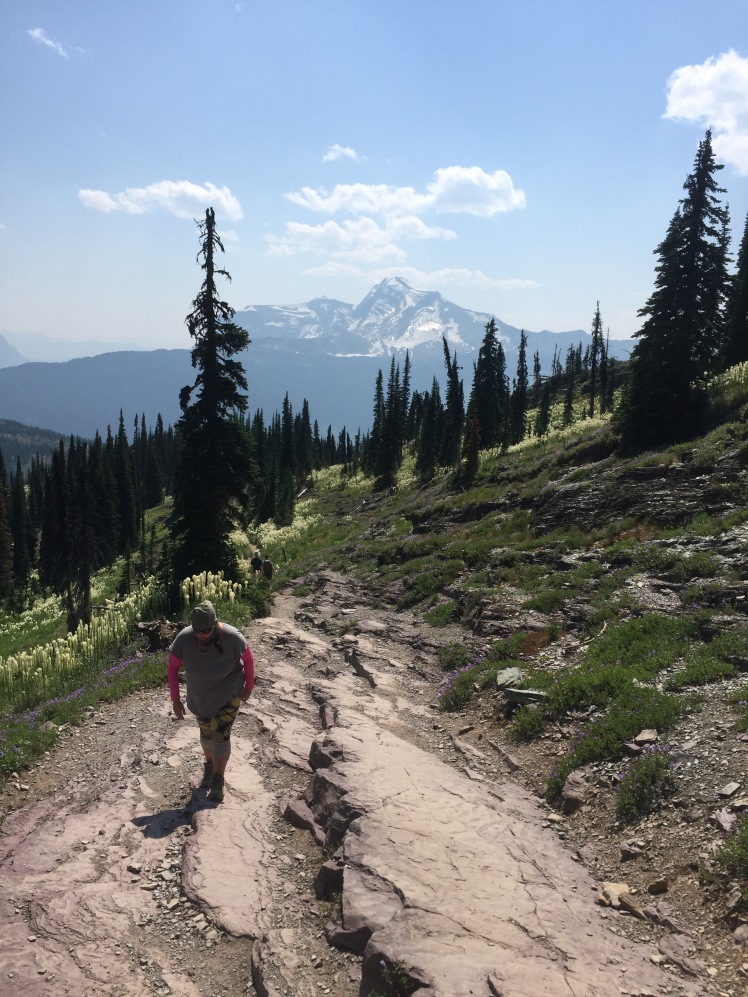 We've done longer hikes, but not under these conditions. I told Trent I wanted a more strenuous hike that day, and he's nothing if not dependable. So I'll let him tell you all about this particular trek that I only hope to forget.

After completing a 3-mile hike to Hidden Lake & 5-mile hike to Avalanche Lake, we were ready to challenge ourselves. We decided to pass on a 7-mile hike around Lake McDonald (too flat), and Rana vetoed a 12-mile downhill hike along highline trail (too long).  So we settled on an 8-mile, out-and-back hike called The Loop (cue ominous music).

View from The Loop Trail to Granite Park Chalet

Initially our heroes (Rana and Trent) enjoyed hiking past a small waterfall & crossing a cool bridge. We thought "This hike is turning out to be easy & beautiful".  Our naïveté was soon punished, when we reached the 1st of 3 distinct phases of the hike.  Rana named this first phase 'Hell'.

Shortly after crossing the bridge, we became aware that we were not alone. It soon felt like thousands of flies had descended upon us – gnats, horse flies & biting flies.  The sweatier we got, the more flies surrounded us.  And the heat was tremendous.  Rana later referred to our flying companions as 'biting evil demon bugs'.  It soon became so bad that Rana just couldn't stand it & I gave her my 'bug-shield' buff. I didn't realize how much good work that buff was doing for me until I gave it away.  But I love this girl & that's love.  Half way through our ascent, I told Rana that my shadow looks like Pig Pen from Charlie Brown.  I won't talk about flies anymore, but they were our constant, annoying companion for the next seven hours.

The bear grass in full bloom was spectacular though

Shortly after the flies, we began climbing…and climbing…and climbing. This was Phase 2 of the hike – Purgatory.  The official maps say that the Loop Trail gains 2,200 feet over 4 miles. Now, I've hiked 80 miles on the Colorado Trail & I can tell you that those were the longest 4 miles in Glacier National Park.  My Fitbit claims it was 5+ miles each way. Rana's Apple-watch said the round trip was 9.6 miles.  Importantly, there was no shade for the first 4+ miles & no flat parts to rest & no reprieve from the flies.  The trail just kept rising before us. At one point Rana asked me to point out the end of the trail, and I pointed straight up into the sky. This was the longest phase – by far.

There were lots of rest breaks, some tears and eventually talk of dying.  It was during this phase that I took Rana's pack & carried both packs for the rest of the hike.  Every person we passed on that trail for miles always said "just one more mile to go!"

So there we are, climbing through some legitimately beautiful territory.  And we can better appreciate the natural beauty because we attended a ranger talk the previous night, about the myriad interconnections in forests – especially in forests that are rebuilding after a big fire.  Our photos captured the dead trees from the 2013 blaze & the new trees, bushes and ferns that had grown several feet tall in the intervening years.

I want to share one point of note. Near the end of Purgatory, as our collective will began faltering, a huge butterfly flew past & circled us several times. It was an uplifting moment for me.  At least I think that actually happened.  I could have been hallucinating from the heat, the bugs and the climb. I asked Rana if she saw the butterfly, and she authentically told me "I don't give a shit. The butterfly isn't helping.  The butterfly is just slowing us down." 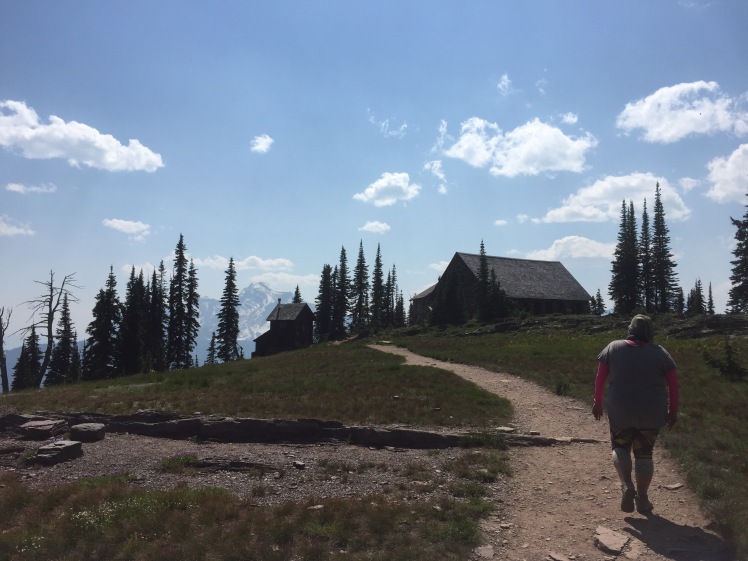 So, the Purgatory phase lasted 3+ hours, but we kept trudging toward our final destination – Granite Mountain Chalet.  Throughout the hike, I tried to keep us hydrated & motivated.  As I talk to Rana in the aftermath of the hike, I learned that I probably oversold the Chalet.  Rana was envisioning "Air Conditioning, and a grand lobby with giant fluffy chairs to sleep in."  What actually awaited us was an old stone building without running water, or trashcans (pack in & pack out) & two overused pit toilets (aka Trail porta-poties).

This brings us to the third and final phase of the hike – arrival at the Granite Mountain Chalet – AKA False Heaven.  By this point I was legitimately worried about Rana.  She was confronting and overcoming some serious physical/mental/emotional limits.  I'm very proud of her!  But in the moment, I was concerned about what would happen if she laid down on the trail and needed help.  Eventually we arrived at the Chalet & I found an open table (picnic bench) in the back. Rana laid down, and I talked to the manager about options to get down without hiking.  Fortunately, we rebounded after we ate lunch & received the kindness of strangers. Margaret the manager gave us some Gatorade (because I left my wallet in the car), and the Naturalist in Residence gave us electrolyte pills & powder from her first aid kit.

Readying to brave the descent–the sun sleeves have been a life saver, as well as the cooling neck thingy and Gatorade

Although 'False Heaven' was less than we envisioned, the water, rest, electrolytes & coolness emboldened us.  So we embarked on the descent & did everything I just described in reverse.

Red deer that visited us as we descended from the chalet

Including stops, it was a 7+ hour marathon hike. We agreed that we were done hiking for a while.

The next day we went into civilization to pick up supplies, do laundry, get an oil change.  Upon returning to Glacier, we had one of our favorite experiences.  We drove to a spot along the McDonald river where there are big rocks that you can leap from, into the cold river below. We both jumped & have mini movies of it. I went back several times to jump from different places and higher launch points. The river was so cold & so energizing!  We loved it!

Red Rock, the perfect place to cool off and get my mojo back after the previous day's hike

If I wasn't already head over hiking boots in love with this man, I would be now. His determination, encouragement, kindness and love saved me and my spirit on this hike.

I can't say that I love this hike because he made it fun. But I can say that I survived. Against my objections he carried my pack. He sacrificed his own protection from the evil demon flies for my own. He would not let me lie down and wait to die. He did everything possible to get me through this, and let me tell you, when I'm overheating and being swarmed by bugs and have miles yet to go, the deep end (as in going off) comes fast and hard.

So grateful to have this loving and generous man in my life, my soulmate through heaven and hell and back.

Somewhere along the trail – couldn't stop for long though or the bugs would swarm us!

One thought on “Sabbatical Days 82 and 83: The Hike Through Hell and Then Redemption in Glacier”