Since we came back from the cruise with a wicked stomach flu (thank you, norovirus), we were not able to leave the following day for our Four Corners camping trip with my in-laws as planned. Four Corners is the unique location where Colorado, Utah, New Mexico and Arizona all meet. It’s pretty cool to think you can stand in four states at once.

Anyway, we needed a few extra days to recover, so some things had to be sacrificed. The original itinerary called for visiting The Great Sand Dunes National Park on the way to Pagosa Springs for a night before heading to Durango, Ouray and Glenwood Springs in southwestern Colorado. Instead, we lost two days to our gastroenteritis and drove straight on through to Durango. We also missed the day we had planned to visit Mesa Verde National Park and the actual Four Corners, which are both driving distance from Durango.

The cool thing about sabbatical is that it wasn’t the end of the world to have our plans derailed a little bit. Time is so much more elastic on sabbatical than it is in “real life.” Normally, being laid up in bed feels one-hundred times worse because I feel like I’m either getting behind at work or missing out on something fun I can never recapture. On sabbatical, those worries don’t exist. It’s a realization that I hope to hold onto and bring back to my “real life.”

Trent did all the planning for this trip, and I must say, he’s pretty darn good at picking out campsites. He knows how much I love the water, so he found campsites on the water in all of our campgrounds. In Durango, we stayed a the United Campground, and Trent charmed his way into the very best spot (site 103). We directly overlooked both the Animas River and the Narrow Gauge Railroad that ushers the Durango-Silverton train. So cool to watch rafters and kayakers paddle by as well as the train right from our camp site.

We also didn’t have a bad meal in Durango. Since we had been sick, and since we were traveling with my in-laws (who stayed in hotels), we ate out more than we usually do while camping. Trent is great about asking locals for suggestions, and the lady at the pet store suggested a great little cafe near Fort Lewis College for breakfast, CJ’s Cafe. The green chile was excellent! Guido’s Ristorante had a dog-friendly patio and the waitress brought our dogs treats and fresh water, earning herself a $20 tip. The fresh pasta was incredible!

The Durango to Silverton train ride was pretty spectacular, if VERY hot. It had been near 100 degrees in Durango, and the ride to Silverton didn’t bring the temperature down too much, but it was beautiful just following the Animas River through the mountains. 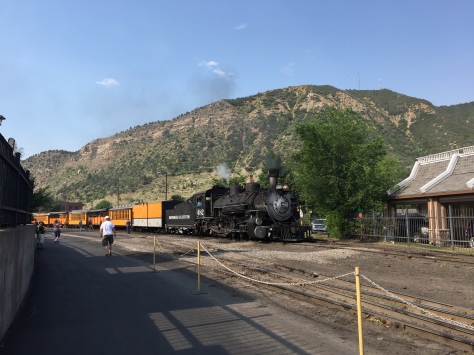 Some of the early views were particularly spectacular. 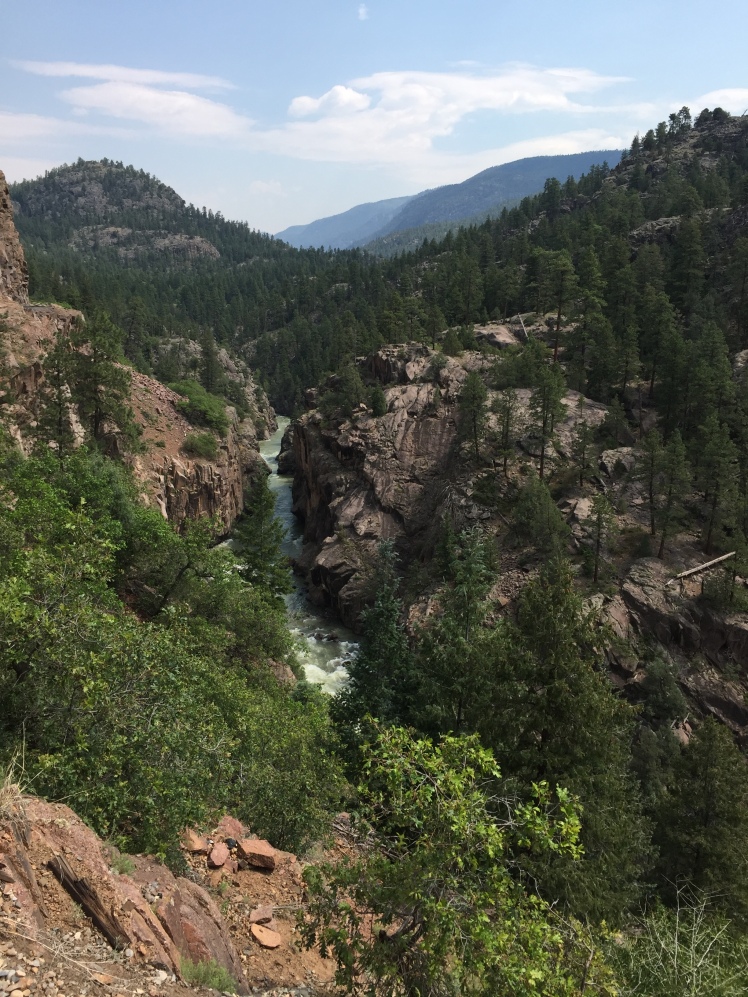 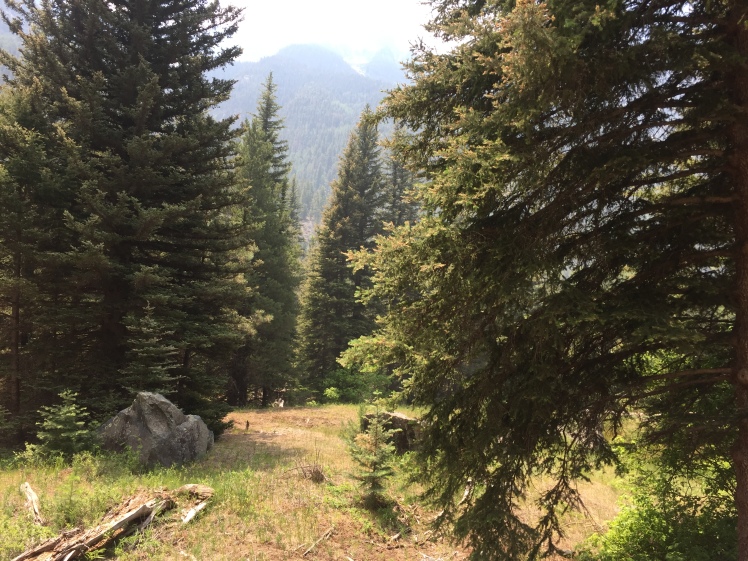 We ate at the Little Bear Cafe in Silverton, walked around a bit looking at shops and then headed back down to Durango. Silverton is a true mountain town with only 637 year-round residents and not a paved road in sight. That’s Trent and his Dad outside The Shady Lady. 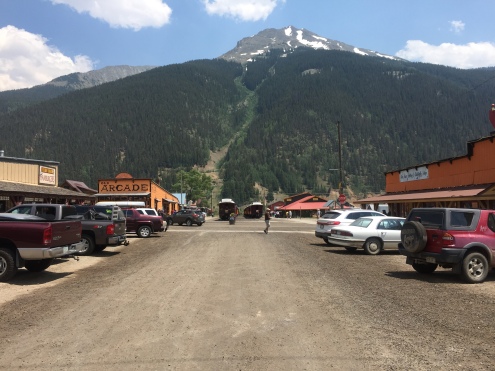 View of the main street in Silverton 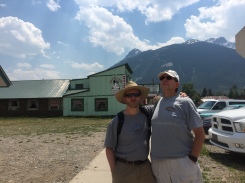 Although it was stiflingly hot during the day at around 100 degrees, it was so nice sleeping at night without a hat and tons of layers to stay warm. The nights were around 50 or 55 degrees, and I was in heaven. I always said I could live in a cave because the temperatures stay around 50 year round.

All in all, we agreed that Durango would be a pretty awesome place to live or at least have a vacation home (adding it to the long list). You have Purgatory ski mountain nearby, a small regional airport, lots of dog-friendly businesses, outdoor activities in the mountains and on the river, and fun things to do like visit a Honeyville (for fresh honey of course), farmers markets, a fish hatchery, and great restaurants and shops. I loved the slow pace of life. I suggested Trent study acupuncture and open a clinic and I could do the marketing. That could work, right?

The drive from Durango to Ouray took a few hours and is arguably one of the most spectacular drives in America, and also one of the scariest (think 1000 foot cliffs and no guard rails). Three mountain passes connect Durango to Ouray, and a section of the drive is known for its harrowing twists and turns and amazing overlooks.

Tangent: The first time I ever did this drive was in a winter storm when I was working for the Colorado Department of Higher Education and on a work trip with my mentor, Gully Stanford. Imagine whiteout conditions and a state car (Ford Taurus) with bald tires. So, it was nice to experience it in perfectly glorious summer weather this time around.

First we passed through Coalbank pass at 10,000 feet. Then Molas Pass, which had a beautiful lake and campground that is now definitely on my list for future trips. Finally, Red Mountain Pass, which gives Red Mountain Creek its rusty red color from all the iron.

This drive was like being buried in the mountains at times, like the mountains were just layers and layers of blankets swaddling us.

I’ve always proclaimed myself to be more of a water girl, but driving through these mountains and mountain towns made me consider that I just might be a mountain girl. The pace of life, the wildlife, the piney fresh air, the outdoor lifestyle, the communion with nature. I could get used to this.

Ouray was a very cute little town in its own right. We stayed at the Ouray RV Park and Resort (site 38) right on the Uncompahgre River. Another great find by my husband, but not as much shade at this site as we needed in the hot weather. But it did have a convenient riverside trail that went from our campground into town in just under a mile. Perfect for a morning or evening walk.

My mother-in-law and I took a day trip to Telluride, Colorado, which is about an hour or so from Ouray and literally nestled in the mountains. Basically the highway just deadends in this quaint but upscale mountain town (apparently Oprah owns a home here). I was on a quest for a cute sunhat, and finding one that didn’t cost a fortune was a feat. But I did it!

I love taking pictures of old schools, and this is the old high school in Telluride, now the elementary school.

Finally, on the way out of Ouray to Glenwood Springs, we did a very short hike up to Cascade Falls, which is literally right in the center of Ouray. Since we’d both been sick, we avoided strenuous hikes, but this was a .3 mile round trip up to a beautiful waterfall, which felt great in the heat.

This was my favorite camp site on this trip, and possibly of all of our camp sites so far. We stayed at Glenwood Canyon Resort (site 17), which was right on the Colorado River. Lots of white water rafters waving as they passed by, and yes, another railroad. And so much shade! So cool! We spent most of our time just sitting by the river drinking hard lemonade. 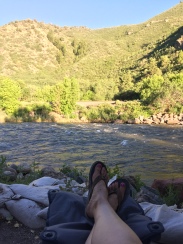 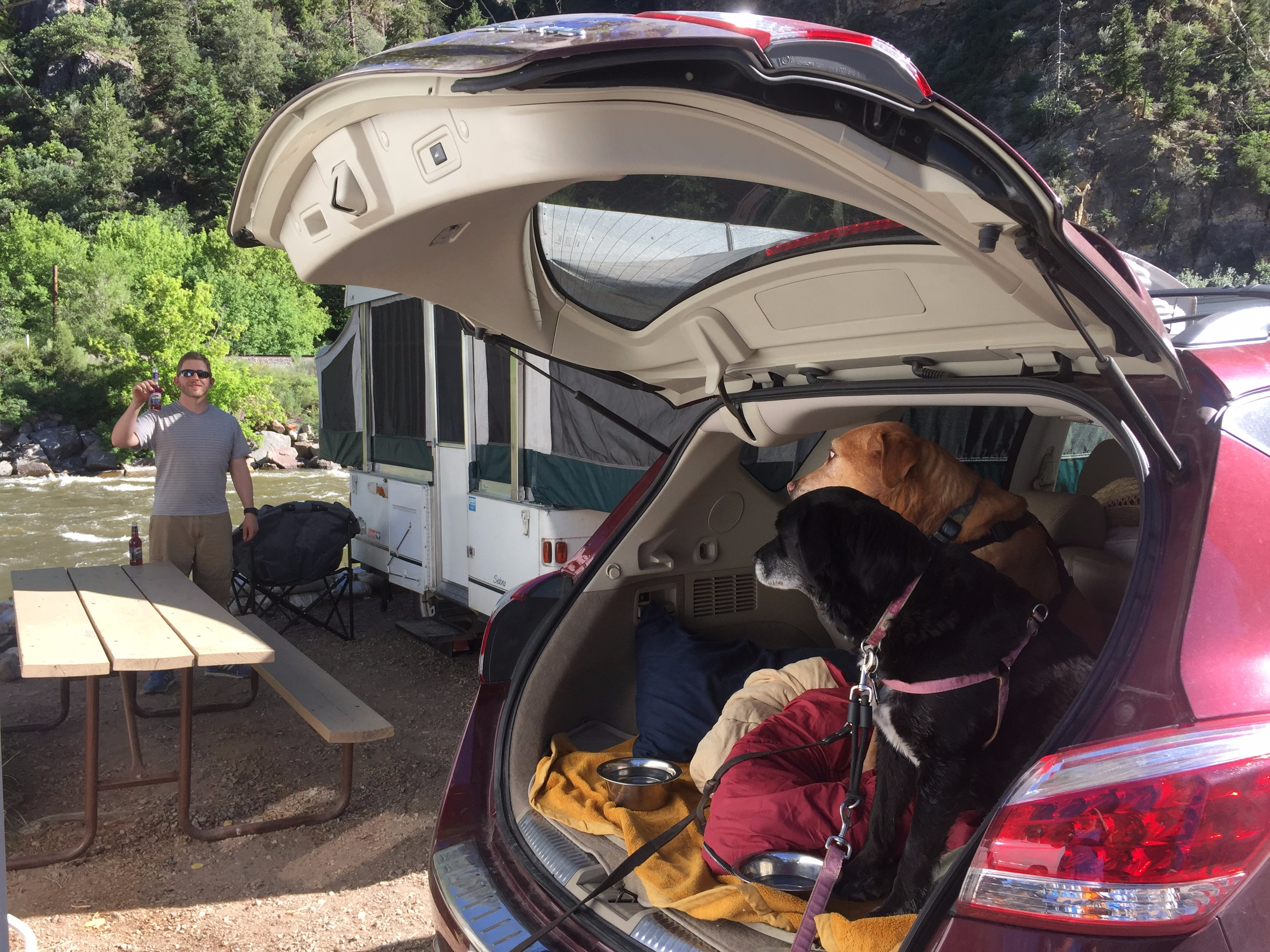 We were only in Glenwood Springs for one night, but we made a point of heading to the hot springs pools. There are lots of hot springs in southwestern Colorado, and we could have enjoyed them in Durango or Ouray, but we waited for our last night to relax in Glenwood Springs. It was worth it. No pictures because I forgot my camera, but it was blissful to steam up in the cool air of the mountain evening.

Overall, our short little trip to southwestern Colorado had a number of firsts:

Hot camping: I’ve never been so hot, and I’m from Texas! Being in a pop up camper, even with the windows all open, on a 100 degree day is just not that fun. It’s like baking, and I learned the best solution is to put a wet buff on my head and sit in the shade until the sun goes down.

Rover.com: We needed a dog sitter while we took the Durango – Silverton, a six hour round trip ride. So, we used Rover.com to find one. We had a great experience; the sitter picked up our dogs and took them to her house which is on a horse farm (it was Durango afterall), and she even sent pictures throughout the day. Molly and Tucker seemed to love it and came back exhausted.

The Columbine is the state flower of Colorado, and I’ve seen pictures, but I’d never seen one in the wild for some reason. Well, they were all over the mountainside as we arrived on the train in Silverton. I tried to get pictures, but with the moving train, it was difficult. I did notice that they tended to grow in the rocky crags, not in the grassy meadows, which I thought was pretty cool.

So, needless to say, this was a wonderful 5 day trip to southwestern Colorado, and although we didn’t get to do everything we had planned, we had a great time with family exploring the little mountain towns. And now I can’t stop thinking about how to make a permanent move to a little mountain town and to a slower pace of life!

2 thoughts on “Sabbatical Days 54-59: Rivers and Railroads in Durango, Ouray and Glenwood Springs”