We arrived at Zion National Park early yesterday morning, a little later than planned because we overslept at the RV park where we had gotten the last spot the night before. BUT the camping gods were with us, and after waiting in a long line of cars, we got a wonderful site at the South Campground in the park. 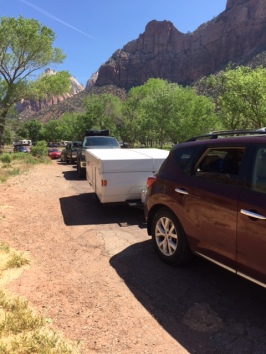 Everyone says that the Watchman campground is way better, but I don’t get it because South is right next to Watchman and just as pretty. Oh well, we love it, and so do the dogs. 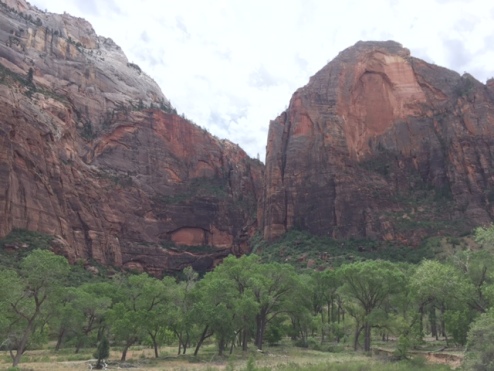 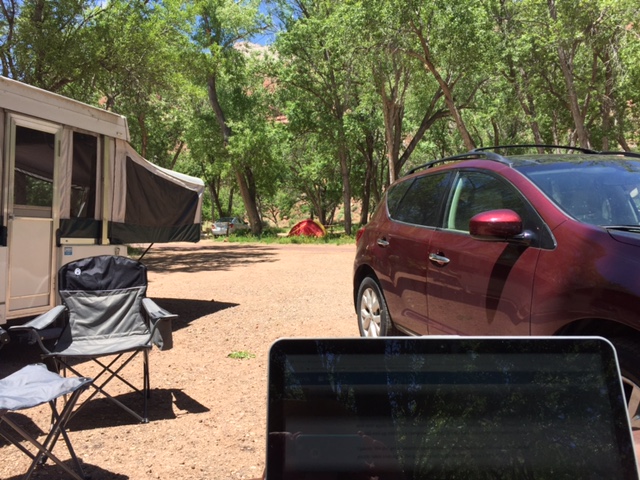 We had originally planned to try to hike as soon as we were all set up, but instead we decided to take a day to just settle in, enjoy the sunshine, and hang out with the dogs. And Trent also spent a few hours searching for a new battery for the Freedom Machine so that we could get the power going, but unfortunately even a new battery didn’t fix the issue, so we have some work to do when we get home. Oh well, we are doing just fine with flashlights at night and a cooler instead of using the fridge. The main perk of the Freedom Machine (aka popup camper) is the bed. 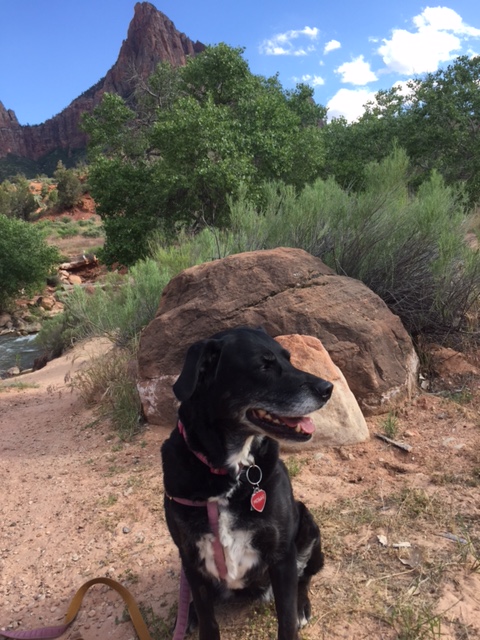 We grilled up some hot dogs for dinner, drank some beer, and called it a night around 9 or so (the exact time doesn’t really mean anything on sabbatical).

Okay, several people had told me that this was the hike to do, and then they’d end by saying, “but it’s hard.” I guess I just let my mind gloss over that because I was not prepared for the ridiculousness that was the hike to Angels Landing. Instead of telling you in words, below are a series of photos from the bottom to the top. The very, very top. Did I say top? I mean top. 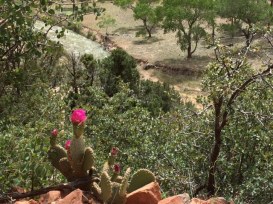 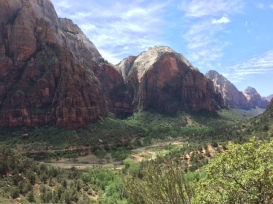 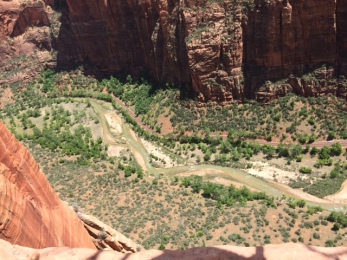 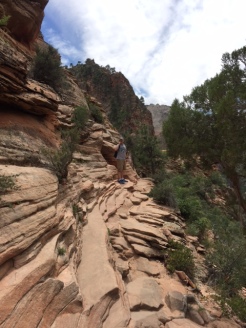 Imagine scurrying over rocks, sometimes on all fours, holding on to a chain for dear life so that you don’t plummet thousands of feet to your death. Now imagine hundreds of other people scurrying around you, many going the opposite direction. Crazy! But we did it together, and that was pretty awesome.

I am terrified of heights, so this hike, where I was basically skirting the edge of a thousand foot cliff (I have no idea how high it actually was, but it was taller than a skyscraper!), definitely counts as facing a fear. Check.

When we were planning our sabbatical, we agreed on three priorities: Us, Body, and Mind. I hadn’t realized that our hike to Angels Landing would be the triple whammy of sabbatical activities, but it was.

Us: So, I’m a slower hiker, walker, runner, biker than Trent. I have my pace and it’s One. Two. One. Two. That’s me putting one foot in front of the other. Of course, by the middle of the hike, it was more like One…..Two……One……….Two…………. But I just kept going. Trent is much steadier, and his legs are like tree trunks, in the good way. So, we brought walkie talkies to stay in touch.

This hiking speed discrepancy used to be an issue.  I used to get all wound up if Trent didn’t hike slower for me. But on this hike, we found a great rhythm, and the natural ebb and flow of the traffic (hundreds of hikers!) along with Trent’s intentional pit stops in the shade to wait for me meant that we had periods of time together to encourage each other and remark on the scenery and stretches of time when we were on our own. It was nice. 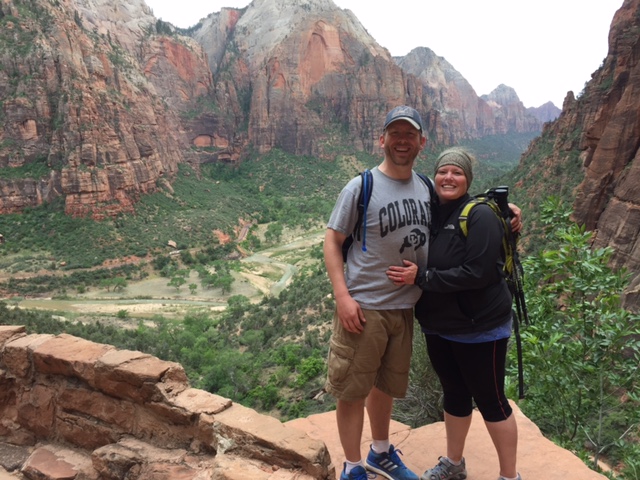 Like in life, we don’t have to spend every moment together, but enough of the time to have a meaningful shared experience. The time apart was just as valuable as we had time to reflect and be introspective and to capture great pictures of each other from more distant vantage points.

Body: This is obvious. I wish I had a scale because I’m sure I lost five pounds on the way up and another two on the way down. According to my Apple watch and Trent’s Fit Bit, we hiked about 5.5 miles and burned well over 1,500 calories in just under 5 hours.

Part of my journey is to get in better shape, and the fact that I could make it up this treacherous beast of a mountain and pretty much keep pace with everyone else was a big win! I’m signed up for an obstacle course race in August, and this felt like good training ground.

I plan to hike most days when we are camping, and this has got to be one of the hardest hikes we will encounter. Feels good to start with a win on a crazy one. 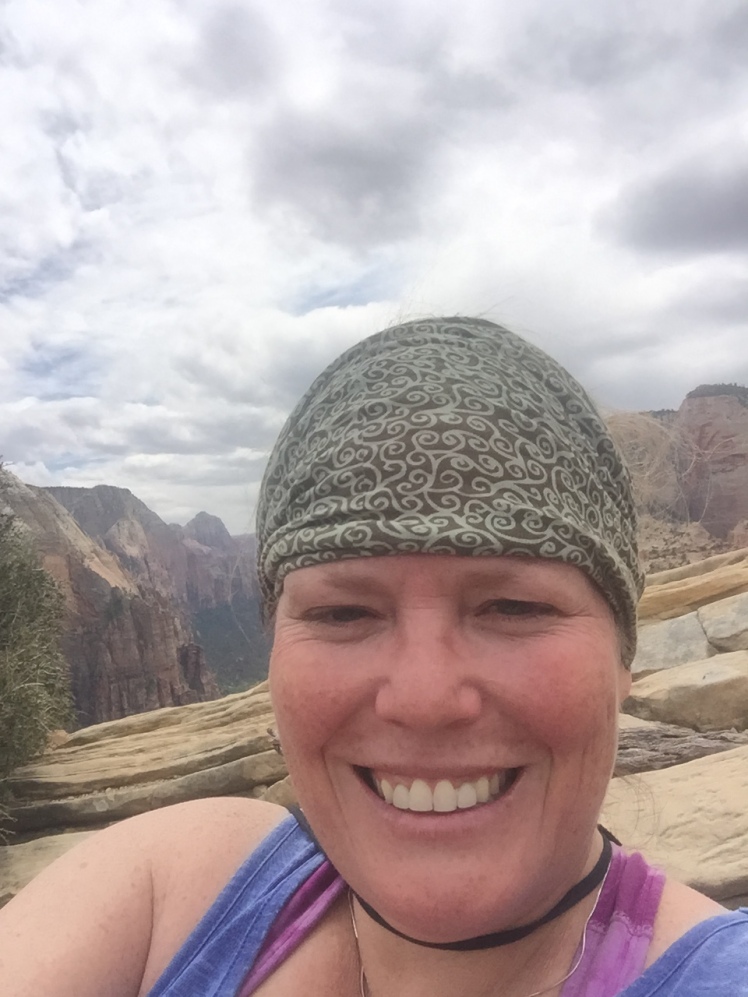 Shout out to Ryan Lien, my personal trainer and co-owner of The Rebel Workout in Denver. Without his brutal workouts and high expectations, I might not have been ready for this. Also, thanks to the Charis and Heidi whose Rebel Cycle definitely got my legs into better shape to tackle this hike!

Mind: During those solo parts of the hike, especially when the hoards had passed by, and I had the trail to myself, it was a peaceful time for ruminating. I thought about my next blog post. I thought about my awesome husband who I knew was surely waiting up around the next bend. I thought about how my sister, Tara and her husband David, would LOVE this hike and would surely blaze to the top, probably with a kid strapped to each of them. I thought about how lucky I am to be here with Trent, living life, not just talking about what we want to do some day.

I was grateful. Grateful that I have the strength and courage to experience such beauty so far from home, and so deep in this wondrous country.

I wondered about all of the people who I passed on their way down, what brought them here, who were they with, what did they think about when they made their way to the top? I saw lots of young hippies, college students, tourists from all over the world (Australia, Japan, India, the list goes on), grandparents, couch potatoes, just regular people like me, all of us making a journey to the top of some crazy cliff just for the experience. At what point did each of us fully commit to reaching the top, and realize I’ve come too far to turn back now?

That moved me, to imagine being one tiny person in a world of billions, but one who chose along with all these others to make this trek and take it all the way to the end. We followed in each others footsteps for miles, with slight variations (a few people ran-CRAZY!, some took short cuts, some used hiking poles), but the rocks were worn down by the weight and the commitment of thousands and thousands of little ol’ souls just like me who have made essentially the same journey. One. Two. One. Two. One foot in front of the other in this journey called life.

Wildlife: Rattlesnake!!!!! Look closely and you’ll see the tail! Trent spotted him on our way back down and there were hikers sitting on the ground just inches away!  Yikes!