Taking a year off is going to be life changing, and at some point we both realized that we needed to do more than save money and make lists to prepare for it.  We needed to PRACTICE for our sabbatical, our Found Year.

What does that mean exactly?  Well, it started with a realization that we needed to get used to the idea of spending less and consuming less in order to save the money we needed to save. That would also prepare us to be more frugal during our year off (money to travel and have experiences vs. money to buy stuff).

Step #1: Lose the boob tube (or at least cut the costs)

The first thing we did, which is the first thing many people do to save money these days, was to cancel our subscription to satellite television.  I slowly weaned myself off of the television shows that I’d come to rely on to help me decompress after a stressful day:  Grey’s Anatomy, Scandal, The Voice, Big Brother, Project Runway.  Oh, I could go on and on. I love me some guilty pleasure TV.

We switched over to a combination of cheaper streaming options:  Netflix, Hulu Plus, and the CBS app (CBS because I just couldn’t let go of Survivor until after the Millennials Vs. Gen X season. Go Gen X!)  Now we’ve even dropped Hulu Plus, and as soon as Survivor ended, we dropped CBS too.  Then I was stranded in the land of Murder She Wrote (yes, I watched all 264 episodes of Murder She Wrote in the last six months. I’m weird).  All in all we saved about $120 a month.

Again, this turned out to be more than a cost-saving strategy because it meant that I was getting used to spending my money less on things and more on experiences.  Going for a hike is cheap.  Buying new hiking shoes is not, but I have old hiking shoes with many more miles left on them, so even though I would love some new ones, not necessary right now.

I love my $4 Starbucks flat white, but I have this Keurig that my wonderful in-laws gave me a few years ago.  I also deleted most (not all) of the shopping apps from my phone (there were a lot).  I was spending a lot more money on crap I really didn’t need than I realized. Note: I do still have one active shopping addiction, and that’s my LuLaRoe leggings.  But they are only $25, and they are as soft as budd-ah, and so cute, so I just won’t give them up! 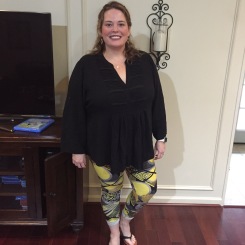 When we do spend money these days it tends to be more on experiences with friends and family than on eating out or consumer goods (except leggings!). Making memories instead of buying junk we don’t need is the priority, and amazingly it costs less!

Turns out there are a lot of people looking for ways to simplify their lives right now, and what I was trying to do in preparation for sabbatical was exactly that–remove all the extra stuff from my life that I really don’t need so that I stop relying on it now, making it an even easier transition to my year of freedom.

I happened to be watching an episode of Tiny Houses on HGTV (on Netflix of course), and one of the tiny home owners said that they were inspired to live in a tiny home by trying a 30-day minimalism challenge.  So I looked it up.

So, if I’m honest, I only made it through a few weeks of this challenge before life got too busy or I got too distracted to keep it up.  Check out my blog post on my own approach to minimalism for more detail. This wasn’t Trent’s thing, so he didn’t participate, but he was already practicing some of them anyway- walking, mindfulness, gratitude, meditation, single-threading.

The best things I accomplished through this 30-day challenge were to stop watching so much TV (I really don’t want to spend whole days watching TV on sabbatical), un-friending people on Facebook (anyone I had a neutral or negative reaction to when I looked at their name on my friends list was un-friended), outlining my goals and priorities, and cleaning out my beauty collection.  I was stunned by how many little lotions and perfumes and face creams and lip sticks that I was holding on that were long ago expired or that I never liked in the first place.

Beauty supplies are like the spice rack of your bathroom.

For the last year, Trent and I have also occasionally taken our sabbatical for a true test drive by pretending that we are already on it, in order to imagine what it’s really going to be like to live a life of freedom for a whole year. Sometimes it’s a weekend getaway (on the cheap of course; off-season is our friend), sometimes just a day trip, and sometimes just a night out. We even spent a week in Cabo (thanks to my mother-in-law’s timeshare that made it affordable) pretending that we could sleep in and enjoy mid-day margaritas every day with no end in sight.

When we take sabbatical out for a test drive, there are no emails, no talks about work, no stressing out about anything. At least that’s the goal. We live in the moment and just enjoy each other and the experience.

The cool thing about pretending your are on sabbatical is that it gives you a chance to think about what you will do differently when the time really comes. So I’ve been giving a lot of thought to that. And what I’ve come up with is that I will:

For each day on sabbatical, I plan to record how I am staying true to these five concepts. My daily blog posts will capture the following reflections (or something similar):

So, we’ve been on the test drives, we’ve reduced our dependence on consumer goods and amusements. Now, we are ready to drive that sabbatical off the lot for real!

Check out our itinerary as it stands so far!

One thought on “Sabbatical Test Drive: 5 Small steps to get you (and your wallet) ready for an adventure of your own!”